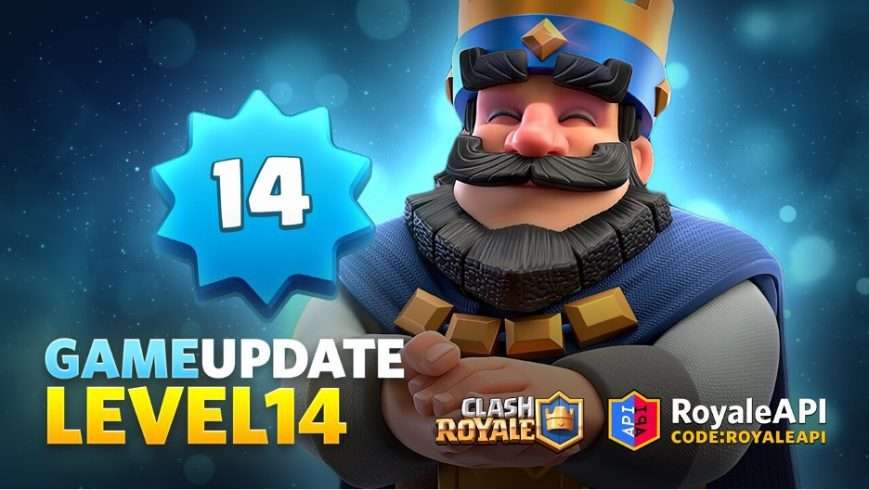 If you are familiar with the video gaming sensation that is Clash Royale, spun off from Clash of Clans back in 2016, then you know change does not come easy to the Supercell developers. Sure, they will tweak the hit points, balance the characters, and adjust damage strength from time to time but nothing truly epic has happened. That is, until now.

The highest mountain any Clash Royale player could climb would be to advance to Level 13 but that ceiling has been shattered after it was announced that a higher King Level 14 is now available. It’s big news for the Clash force and if you have ever contemplated playing, now would be the time!

And there’s more good news because, in addition to the newest and highest level, Season 29 offers a cheaper way to upgrade your cards while Star Points will allow players to change the cosmetics of the characters starting at KL6 and you can also unlock at levels 10 and 13 which won’t affect the characters’ strength, hit points, or spell power but they will look cooler when you’re playing.

As you may know, the Clash Royale League World Finals will be held on December 3rd through December 5th with over $1 million in prize money. It’s so popular that even the best online sportsbooks will be offering prop bets and you can find them all using the odds tracker app for the best odds, live scores, and in-depth stats.

There will also be three new Champions introduced into the fray but those can only be unlocked at Level 14. The first of which, the Golden Knight will be able to launch chain attacks on multiple enemies when charging his opponents. Second is the Archer Queen who will be invisible while shooting arrows at her many targets causing maximum pain to those who fall before her. Last but not least is the Skeleton King who can resurrect souls to assist in vanquishing his opponents.

The increase in the health and damage to the King and Princess Towers will be noticeable as well when you reach the highest level. The reward chests have all been revamped and at Level 10 players can receive the gold crate while those who have Pass Royale can enjoy the Royal Wild Chest as part of the free rewards tier.

We have heard reports and seen evidence of China’s more stringent stance on video gaming and it has come to bear with Fortnite’s Fortress Night, the version allowed and played in China. Launched in 2018 in a collaborative effort between Epic Games and Tencent, it has become wildly popular in the communist nation, perhaps too much so.

On November 15th, 2021 it will no longer be available to Chinese residents as Epic Games has decided to throw in the towel on the game. It’s not all that surprising that Epic has decided to act first rather than the government forcing the issue as Tencent, a Shenzhen-based technology behemoth in China, owns a 40 percent stake in Epic. Assumptions are that the government strongly suggested that they would prefer the American developer to bail out rather than having to throw them out.

LinkedIn, owned by Microsoft, has pulled its roots from China due to a “significantly more challenging operating environment and greater compliance requirements.” Censorship is alive and well in Red China and it is only getting more severe.

Daniel Ahmad, a senior analyst at Niko Partners, tweeted, “The battle royale genre has been strictly regulated in China. The domestic games that are approved there have heavy content changes.”

The tremors to corporate concerns operating in China began roughly a year ago when Jack Ma’s Ant Group was preparing for the largest IPO in history, rumored to be in the $37 billion range. It would not come to pass as the Chinese government squelched those plans, the first of many government flexes since then. It is reported that over $1 trillion in asset value has been eliminated from companies based in China.

And make no mistake, unlike in the United States and democracies around the world, there is no appeal process for these companies. The government rules with an iron fist and if the corporate titans don’t like it, they would be wise not to express it.

As China has enjoyed monumental growth, those entrepreneurs and leaders of Chinese industry have become more powerful in the process. But the Chinese government has long been wary of capitalism and its ideals infecting the general populous, usurping the fundamental socialism as the construct of the totalitarian regime.

Analysts from Goldman Sachs recently wrote in a research report, “The latest regulatory tightening cycle is unprecedented in terms of duration, intensity, scope, and velocity.”

Fortnite is just the latest casualty of increasingly onerous government policies towards private business and it appears as though it won’t be the last.