Did you experience a rush of blood? Is your heart beating so loud you can hear them? Because mine is too. The 8th sequel to Harry Potter! *squeals* (Also, can’t stop jumping around doing my happy dance!)

Now now,  Potterheads try to keep it cool. Take a swig of your butterbeer, focus on your breathing, put your head between your legs, it’s just a sequel to the smash hit 7-book series that we’ve all grown up with, and probably still live in our heads with(I still can’t stop jumping! Yayayay!).

J.K Rowling was quoted saying, “I’ve always said, I’m not going to say I definitely won’t. Because I don’t see why I should say that. But I think, Harry Potter 8, as in what happened next to Harry, Ron and Hermione, I don’t think that’s going to happen,” about seven months ago on the subject of a sequel. However, the play is a kind of sequel. The official synopsis reads,
“It was always difficult being Harry Potter and it isn’t much easier now that he is an overworked employee of the Ministry of Magic, a husband and father of three school-age children. While Harry grapples with a past that refuses to stay where it belongs, his youngest son Albus must struggle with the weight of a family legacy he never wanted. As past and present fuse ominously, both father and son learn the uncomfortable truth: sometimes, darkness comes from unexpected places.” 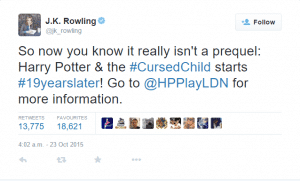 However, bad news for the bookworms, the sequel is not going to be a “book”. The sequel is in the form of a play, “Harry Potter and the Cursed Child”, as announced by Pottermore and Rowling. But hey, anything for the Chosen One, right? 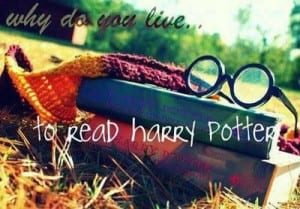 The story was originally conceived by Rowling and will be performed in two parts, owing to “epic nature” of the story, with a cast of over 30 characters. The cast hasn’t been announced yet, so let’s keep our fingers crossed that Daniel Radcliffe changes his mind about playing Harry Potter again! But if the Queen of Magic can do it, he shouldn’t have much of a problem. Written by Jack Thorne, it will be performed at the Palace Theatre in London and will continue from where the 7th book left off, Harry Potter waving off his eldest children at the Platform Nine and Three-Quarters, as the shiny red-black train leaves for Hogwarts. 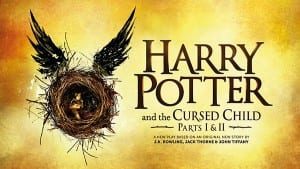 The play could very well be a whole new book series of magical adventures, starring Harry’s son, Albus. Who knows, it might even turn into a movie! (All the good ones do)
But why this sudden change of heart? What caused Rowling to change her position on a Harry-centric sequel? “The story only exists because the right group of people came together with a brilliant idea about how to present Harry Potter on stage,” says she, “I’m confident that when audiences see Harry Potter and the Cursed Child they will understand why we chose to tell this story in this way.”

Tickets go on sale online on Wednesday, Oct. 28 at 11 a.m. GMT on a first-come first served basis to those who registered for priority booking, and Friday, Oct. 30 at 11 a.m. GMT to the general public.

So hop onto the nearest broom, Thestral, or hipogriff(Even a muggle car or one of those muggle flying things will do) and get your ass to London! If you’re old enough and passed the test, Apparate, because it’s the HARRY POTTER SEQUEL, Potterheads!