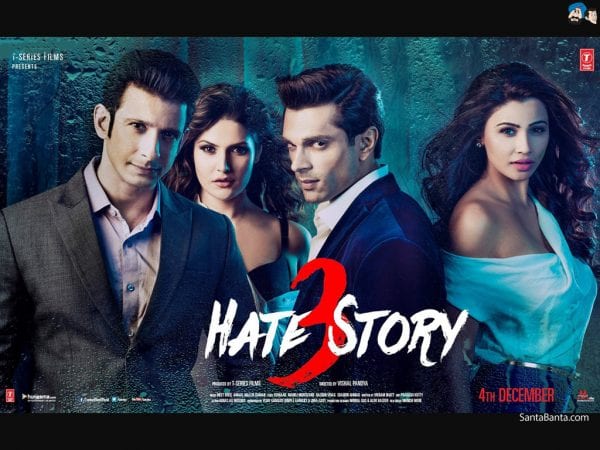 If you are fascinated by corporate movies or corporate rivalries with a pinch of relationship drama, this movie is the catch for you!

The Hate Story 3 Movie is about a man named Aditya Diwan (Sharman Joshi), who is a big shot billionaire settled in Mumbai, who is at the same time also running various errands. He owns a soft drink company and quite many hotels across the globe. He decides to open a super specialty clinic in tribute to his elder brother, who passed away a few years back. He is also married to his brother’s ex-girlfriend Siya (Zarine Khan).

The moment he starts believing that he has finally made it big is the moment when his life turns into a roller coaster ride that had just begun!

Business tycoon Saurav Singhania (Karan Singh Grover), who relishes the view from the top of skyscrapers, makes Aditya an indecent proposal involving Siya, which further leads to an immediate formation of anti-alliance between the two.

When you watch Hate Story 3’s twists and turns to fix their place in the movie, you raise your bar of expectations, and Vishal doesn’t disappoint you much. At least not yet.

It’s like the two heroines are way too obsessed with water and bathing!

And now it’s time to introduce the other hottie of the film, Daisy Shah, aka Kaya Sharma, who plays a close ally to Aditya. Not to forget, she, over a period, has raised her status from a receptionist in the company to one of the gems of Dewan Industries.

Kaya is also seen seducing the rival, Saurav Singhania, in the movie. And you really thought working in a corporate sector was a task that comes easy? I bet not!

It doesn’t really matter to Kaya if her company is under major threats because all she cares about is playing her favorite ‘dress to undress’ game and diving in the pool of fantasies along with the words ‘ Jo bhi soche sapno mein, woh aaj dikha de mujhe sab kar ke’!

But as far as Siya is concerned, Zarine Khan goes by the phrase ‘She competes with no one. No one can compete with her, as she has probably made all the females in the film industry insecure about their H.Q (Hotness Quotient yaar!)

It looks like Pandya wasn’t satisfied with the two sexiest heroines in the film, and hence Karan is added to the gang to sizzle the screen and raise his female fan following!

On the other hand, brightly lit images and super slow motion shots serve as a cherry on the cake.

Sharman Joshi uncovers his acting skills to some extent, but the audience still gives him the benefit of the doubt.

Hate Story 3 Movie may not win all hearts; it surely deserves a one-time watch!

The cast and the direction supports a lot of glamour and suspense factor in the movie that can make anyone devote their precious 131 minutes for the same!