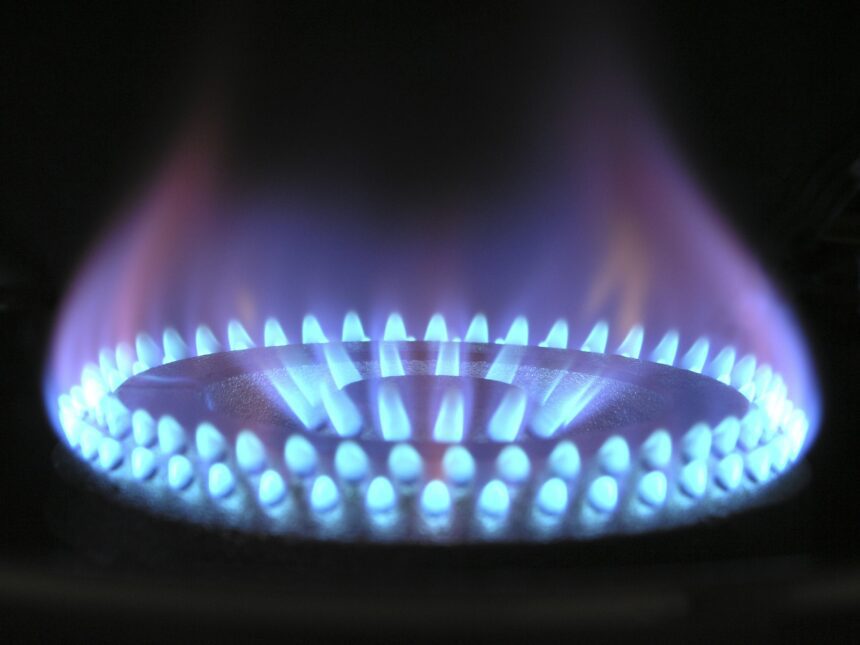 We humans have always exploited nature and its resources for our benefit. It is, therefore, important for us to understand that it is high time to use them wisely and sustainably. In this article, let’s discuss one such natural resource, which is depleting with time, and answer the question of how is natural gas extracted.

Natural gas is a fossil fuel that forms a deep earth crust. Natural gas contains a variety of compounds. The most abundant component of natural gas (CH4)is Methane, a compound composed of one carbon atom and four hydrogen atoms. Natural gas also contains trace amounts of natural gas liquids (NGLs) and nonhydrocarbon gases such as carbon dioxide and water vapor. Natural gas is used as a fuel and to manufacture materials and chemicals.

2. How Is Natural Gas Formed?

Natural gas is formed in warm, shallow oceans that existed on Earth millions of years ago. These oceans’ bottoms are covered with small dead organic matter decomposes known as plankton. These plankton consist of phytoplankton (plant remains) and zooplankton (animal remains). Plankton enters the ocean by river and lands on the ocean floor, mixing with the inorganic material. Over a long time, this sediment on the ocean floor forms oil and natural gas. Natural gas contains sunlight-derived energy that has been captured by decomposing plankton.

Natural gas is formed in the same process that creates oil and is generally the same around the globe. However, different types of plant and animal debris may fall to the ocean floor in slightly different conditions. The steps listed below are used to produce natural gas.

4. Where Is Natural Gas Found?

Natural gas occasionally moved into wide cracks and gaps between the underlying rock layers. Conventional natural gas is natural gas found in these types of formations sometimes. In other regions, natural gas can be found in some shale, sandstone, and other sedimentary rock formations’ minute pores (spaces).

Biogas is a type of gas that is created when organic matter breaks down without the presence of oxygen. This is known as anaerobic decomposition. It occurs in landfills or other places where organic matter decomposes, such as animal waste, sewage, or industrial byproducts.

Biogas is a biological substance that originates from living or non-living plants or animals. This substance can be burned to produce a renewable energy source, such as forest residue.

Although biogas can be refined and used as an energy source, it does not have as much methane as natural gas.

Another example of an unconventional deposit is shale gas. Shale is a sedimentary rock with fine grains that do not break down in the water. Shale is allegedly so impermeable that marble is viewed as “spongy” in comparison, according to some scientists. A layer of natural gas can be “sandwiched” between thick sheets of this impermeable rock.

Because it requires horizontal drilling and hydraulic fracturing, also known as fracking, to access, shale gas is considered an unconventional source. A high-pressure water stream splits open rock during the fracking process, and then tiny grains of sand, glass, or silica are used to “prop” the rock open. Gas can now exit the well more easily as a result of this. Drilling horizontally means going straight down into the ground.

Acidizing and fracking are similar processes. The natural gas well is injected with an acid, preferably hydrochloric acid. The thick rock that is blocking the flow is dissolved in acid

Another source of unconventional natural gas is Geopressurized zones. Below the Earth’s surface, geo-pressurized zones develop at depths of 3,007–7,600 meters (10,000–25,000 feet).

These zones are developed when clay layers quickly build up and compact on top of porous materials like sand or silt. Natural gas is deposited under extremely high pressure into the sand, silt, or other absorbent material below due to the compressed clay being forced to release its natural gas.

Collecting this fossilized material may involve different methods depending on the type of natural gas. Following are a few methods used to extract natural gas.

Vertical wells only reach the natural gas deposit at an average depth of 300–800 meters, at which point the gas can begin to flow to the surface. Since vertical drilling can only access gas reserves found above ground, it is occasionally the ideal method.

A flexible and economical way to increase the drilling possibilities is through horizontal drilling. Due to the drill’s ability to change direction horizontally after reaching the necessary depth, drilling companies can install fewer drilling sites. It is more productive and possible to drill through the natural gas deposits horizontally with the steerable drill bit.

The most exciting aspect of gas production is hydraulic fracturing. Drilling begins with a simulated micro-earthquake.’ The formation of rocks is broken up using high-pressure streams of water, sand, and chemicals. After that, natural gas can rise to the surface and flow into wells and gathering gas pipelines.

However, this practice is prohibited in some locations because. It requires a lot of water, which could harm the environment.

It is highly toxic or radioactive wastewater that, if handled improperly, could harm the environment.

It is a side-operation to all drilling techniques, primarily fracking. Natural gas can flow up to the well by dissolving any rocks in its path using acid.

A growing number of other gas applications exist, such as using LNG in transportation as a lower-emission substitute for diesel and heavy fuel oil.

Before being used, natural gas typically needs to be processed. Natural gas can contain a wide range of substances besides methane when it is extracted. A natural gas well might contain water, ethane, butane, propane, pentanes, hydrogen sulfide, carbon dioxide, water vapor, and occasionally helium and nitrogen. Methane must be processed and isolated from the other components to be used as energy. The almost pure form of methene is used in our home.

Natural gas is a fossil fuel that can be burned to produce energy. In fact, it burns the cleanest of all fuels and produces the least byproducts.

When fossil fuels are burned, various substances, compounds, and solid particles may be released (or emitted). Coal and oil are examples of fossil fuels with extremely complex molecular structures and high concentrations of carbon, nitrogen, and sulfur. They produce a lot of harmful emissions when burned, such as sulfur dioxide, nitrogen oxides, and air-polluting particles that float into the atmosphere.

Contrarily, the CH4 molecular structure of methane in natural gas makes it easy to identify. It only releases water vapor and carbon dioxide when burned. Every time a person breathes, they exhale the same two elements.

Other gases like ozone and nitrous oxide are also categorized as greenhouse gases, carbon dioxide, and water vapor. Global warming results from the atmosphere’s rising concentration of greenhouse gases, which could have catastrophic environmental effects.

Burning natural gas still produces greenhouse gases, but it does so at nearly 30% and 45% lower rates than coal and oil, respectively.

Drilling for natural gas can leak, as with any extractive activity. The leak could be dangerous immediately if the drill strikes an unanticipated high-pressure pocket of natural gas or if the well is harmed or ruptured.

Natural gas does not always cause an explosion or burn because it dissipates into the air so quickly. But the leaks also threaten the environment because they let mud and oil into the neighborhood.

The chemicals used in hydraulic fracturing have the potential to contaminate nearby drinking water supplies and aquatic habitats with highly radioactive materials. People may need to temporarily leave the area due to the uncontrolled methane released into the air.

When gas generation and migration are considered, the shallow biogenic gas, the middle dissolved gas of the oil window, and the deeper thermal gas are all included in the extensive vertical gas-generation zone.

The fact that there is a lot of source material available in addition to the large vertical habitat for gas suggests that a lot of gas has formed but has not yet been found. In fact, according to estimates, 45 percent of the world’s recoverable gas is still undiscovered and based on energy content, natural gas’s final recoverable resources will be comparable to those of oil.

The world’s gas supply is anticipated to last longer than oil because gas isn’t used as frequently as oil, which means that it has a larger global stock.

In the long run, leaks can also develop gradually. Until the 1950s, cast iron was a common material for distribution pipelines, allowing a significant amount of natural gas to escape.

After years of freeze-thaw cycles, heavy overhead traffic, and strains from the soil’s settling naturally, the cast iron pipes start to leak. These days, various metals and plastics are used to construct pipelines to minimize leakage.

However, gas will lose its prominence as a major energy source if its consumption equals that of oil.

Flaring-associated gas has long been a method used in the oil industry. Approximately 141 billion cubic meters (bcm), or 5 trillion cubic feet (tcf), of the world’s annual gas production was lost at the wellhead as recently as 2017, according to a World Bank report. The United States’ annual gas consumption, or 75% of Russia’s annual gas exports, would be the equivalent of this rate, which, despite being lower than in previous years, represents a decline in flaring.

Most gas has historically been flared in Russia, the Middle East, and African oil-producing nations. Due to the expensive recovery of gas and the remote location of many oil wells, most of the gas produced is reinjected but frequently flared what cannot. However, as gas prices have increased, conservation efforts have grown, and gas flaring has decreased.

Pure natural gas has no smell. Natural gas is given a synthetic odor by the companies that supply it so that people will be aware of any potential leaks. Most people identify this as the gas stove or oven’s “rotten egg” smell.

13.2 Who Are the Highest Consumer of Natural Gas?

These countries consumed the most natural gas in 2010, the latest year for which the U.S. Energy Information Administration provides data.