Picking just 15 places from a multitude of beautiful, serene and spellbinding places from the whole of Incredible India is like asking a kid to buy one toy from Hamleys. The Indian subcontinent offers a vast variety of places that quenches every person’s wanderlust.

Ranging from snow-capped mountains to endless deserts, sexy beaches and dense rain forests. India has it all, when it comes to geographical beauty. Travel back in time, and get lost within the remains of ancient empires, marvel at the architectural wonders Or just simply saunter through the streets and experience India with her cultural and traditional vibrancy. Here is a list of 15 must see places in India, guaranteed to give you a glimpse of the great country.

In no particular order

Fondly christened as The Venice of the East, is a place which you do not want to miss. The mirror still lagoons, palm fringed shore lines, picturesque backwaters offers an experience which beckons both domestic and foreign tourists alike. Kerala was also placed among ’50 Destinations of a Lifetime’ by National Geographic Traveler.  Cruise along the sleepy lake sides on a Kettuvallom (House boat) and catch a glimpse of the bustling day to day life of the villagers, while savoring on Karimeen (Black Fish) Fry, freshly captured and cooked in your house boat. Wade through hyacinths and narrow water ways, and you will know why Kerala is called as ‘God’s Own Country’

This city on the banks of river Yamuna is always regarded synonymous to the Taj Mahal. But this amazing historical city has more places to offer.The city boasts of having three UNESCO World Heritage sites- The Taj Mahal, Agra Fort and Fatehpur Sikri. Marvel at the Mughal era artchitecture, and take a guided trip along the forts & palaces and peep into the lives of the Kings and Queens.

The Fatehpur Sikri, was the imperial city of the Mughals, built by Akbar the Great. Take a guided tour and experience the aura of the buildings and witness the grandeur of the blends of Islamic and Hindu architecture.

The Great Indian Desert spread across the Indian subcontinent is a major tourist attraction of Rajastan.  Jaisalmer, a city that lies at the heart of the Thar desert is a breathtaking heritage city which was home to the Rajputs. The Sonar Kila or the Golden Fort is a major landmark, and has made its way into the UNESCO World Heritage Site.

Make sure you go to the  Great Desert in October- November and watch the arid deserts come alive at the Pushkar Camel Fair. The Mela is one among the largest of its kind and attracts thousands of tourists annually. The “longest moustache” and “bridal competitions” makes this fair unique. Don’t forget to bask in the golden sunsets with a Camel Safari through the endless desert.

The capital mega city is a plethora of cultures, religion, historical significance and of course modernity and development. Delhi encapsulates two different worlds- Old Delhi, once the capital of the Mughals, with labyrinthine streets, markets and mosques. In stark contrast to the modern city built by the British empire,with impeccable urban planning and beautiful boulevards and government buildings.

The Red Fort is an epitome of the splendour of Mughal architecture. This UNESCO World Heritage site was residence of the Mughal Emperor for over two centuries The Fort was one of the most important places of political and ceremonial importance under the Mughal rule. It got its name from the massive enclosing walls made up of red sandstone.

The  forlorn ruins of an ancient city of Vijayanagara Empire,  Hampi continues to enthrall thousands of visitors and historians all over the world. The word literally translated to ‘champion’ and was one of the richest and largest cities during its prime. The group of monuments of Hampi was listed in the UNESCO World Heritage sites. The group of monuments include beautiful palaces, ancient market streets, remnants of aquatic structures royal pavilions etc. Take a stroll through the surviving trace of history and soak in the beauty and brilliance of time-honored architecture.

Manali is the perfect hill station getaway which offers a blend of adventure and tranquility with the  snow-peaked Himalayas. Located in the Kullu Valley in Himachal Pradesh, Manali has snowfall from November to April. Besides quenching your thirst for adrenaline with its adventure skiing and trekking, the Buddhist temples amid the picturesque backdrop of the snow capped mountains offer an escape into serenity.If that’s not enough, you always have the option of going shopping in the streets, and tantalize your taste buds with Tibetan momos and chopsuey.

Kutch is the largest district of India. The word literally means something which intermittently becomes wet and dry. It is blessed with utmost ecological and cultural beauty. The profusion of natural wonder, culture and tradition and historical remnants make this place one of its kind. Visit Kutch during the Rann Utsav in December, where the infinite white desert shimmers under the moonlight, and is the perfect backdrop for enjoying the kaleidoscopic folk dances, music and intricate handicrafts.

Kutch also provides a wide array of magnificent palaces, historical sites and of course natural attractions for travelers like the Narayan Sarovar, Wild Ass Sanctuary. Nothing beats spending a  heavenly night in  Kutch deserts in a luxurious tent, which is an absolute delight for nature lovers, adventurists and photo fanatics alike.

Undoubtedly one of the most beautiful places on earth. The archipelago of around 300 islands is the perfect beach getaway- the pristine beaches in the middle of nowhere, with emerald and waters, surrounded by dense jungle and mangroves is truly a paradise on earth.Explore the bewitching flora and fauna of  the ocean by taking a plunge into the emerald water, and  witness the clear cut beauty of under water all around you with the best scuba diving experience.

The archipelago also offers a lot of other places to explore natural beauty in its most pristine form and yes, the ethnic tribes of the islands which remains shrouded with mystery (sorry,  they are out of bounds for tourists).  The legendary Kala Pani or Cellular Jail, which is perhaps one of the most famous reminders of India’s Freedom Struggle, is a must visit for history buffs.

Benaras, the Holy city of India is the most popular pilgrimage destination for Hindus. Situated on the banks of the river Ganga, it is believed in Hinduism that those who die and are cremated here get an instant gateway to Nirvana, or liberation from the cycle of births and re-births. A city which is over a 1000 years old is famous for its aesthetic temples,ghats (river fronts) and fine-quality silks. Benaras is unflinchingly chaotic and blindingly colorful, but a walk through the narrow, labyrinthine streets or along the banks of the river Ganga will live forever in your memory.

Majuli is the largest river island in the world, surrounded by the Brahmaputra river. This incredible island is a masterpiece of God. Apart from the scenic view, Majuli is also known for its cultural extravaganza, a blend of Assamese tradition and tribal culture and tastes. The wildlife sanctuaries in this lonely island will give you a truly exotic experience.

The Kashmir Valley is one mesmerizing place on this earth, it is called a heaven on earth and rightly so. Srinagar is one of the oldest cities in India, and continues to enrapture travelers around the world with its breathtaking lakes, pretty gardens  unique mosques and culture. Wade through the twisting waterways on a Shikara, shopping in the floating markets with the snow clad Himalayas in the backdrop. Discover medieval architectural beauty by taking a stroll in the Mughal gardens, and of course don’t forget to buy indigenous handicrafts and woven pashmina shawls.

This hill station in West Bengal is located at a spectacular 6,700 ft above sea-level. Towered over by the Kanchenjunga, the world’s third highest peak, Darjeeling  is known for its heritage steam engine and tea. A joyous ride on the toy train offers a stunning view of the mountains. This UNESCO World Heritage Site is something that can be enjoyed by all ages. The sprawling tea plantation adds to the charm of this picturesque town. Do not forget to relax your senses with a strong Darjeeling brew.

Ladakh, or “the land of passes” is a region in Jammu and Kashmir which is very sparsely populated. Apart from Ladakh being a region of strategic importance, the place is a traveler’s paradise. A favorite location for bikers, the Pangong lake is a natural extravaganza with its panoramic view of the mountains, blue skies and bright sunlight which makes the lake shimmer and provide a mind blowing spectacle. Leh, was the former capital of the Kingdom of Leh, and hence you can find remnants of medieval palaces, and several Tibetan temples. The serene atmosphere, vivid culture, colorful dressing and traditional food promises an experience of a life time.

The wettest place on earth, Cherrapunji, located high above the misty mountains, is a stunning place which receives rainfall throughout the year. Cascading waterfalls, pristine forests and age-old caves make Cherrapunji a veritable dream for nature enthusiasts and adventure seekers. Explore the living root bridges made with banyan fig trees by the Tribes of Meghalaya, which is truly distinctive to this beautiful place.

A state which thrives on tourism, Goa is simply a place which you cannot miss. Virgin beaches, magnificent cathedrals, and of course the pubs makes Goa the ultimate fun holiday spot. Goa boasts of having unique cultural history, where Indian tradition intertwines with Portugese lifestyle and Latin culture left behind by centuries of colonial rule. Goa has something to offer for all- the Basilicas and historical buildings and museums, scuba diving, parasailing for the adrenaline starved, pubs and music for the party animal. And yes, plenty of sun for that perfect tan. 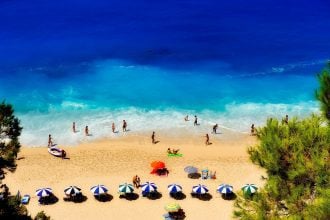