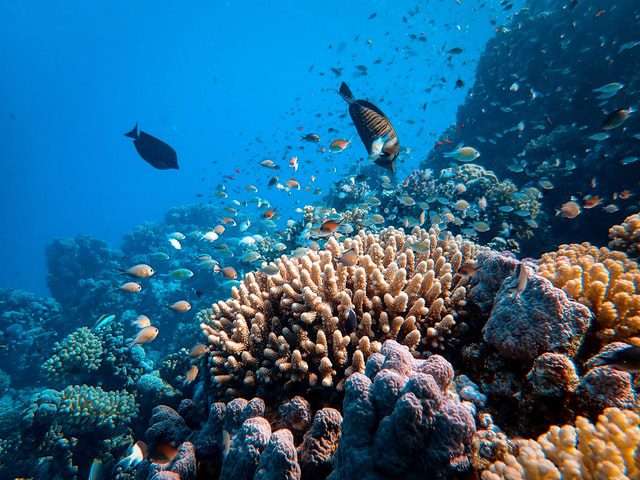 Ocean makes up about 71 per cent of the world. Large geographical divisions made by continents are the five oceans of the world, namely Pacific, Atlantic, Indian, Southern, and the Arctic in order from largest to smallest. The smaller water bodies include several seas, bays, gulfs, and straits.

Oceans play an important role in regulating the climate by generating tons of oxygen that we breathe and absorbing huge chunks of carbon dioxide that we release. They also support much of the world’s economy, from tourism, fisheries, to international shipping.

Oceans are the largest reservoir of water on earth, more than 96 per cent exists in the oceans. They have a highly varied topography formed by hotspot volcanoes under the Earth’s surface.

What Makes The Oceans Blue?

The long-wavelength lights (red, orange and yellow) are absorbed more strongly by water than the shorter wavelength like blue light.

When white light from the sun hits the ocean surface, mostly the blue light gets reflected. Scattering of blue light, makes the ocean look blue.

This effect works if the water is very pure. If the water is full of impurities like algae or sludge, the scattered light affects the natural blue tint of the water. Let us jump onto the details of the five oceans of the world.

Between the Antarctic region in the south to the Arctic in the north; and the continents of Asia and Australia on the west and North America and South America on the east.

Challenger Deep in the Mariana Trench.

The Pacific Ocean is famous for the area known as the Pacific Rim or Pacific Ring of Fire. It is the centre of most seismic and volcanic activities in the world.

It is the path encircling the Pacific Ocean, characterized by the world’s largest number of active volcanoes and earthquakes.

The Pacific Ocean is home to the world’s largest coral reef system, the Great Barrier Reef, situated off the northeast coast of Australia.

It is located in the Coral Sea and is made up of thousands of individual corals.

Vegetation and Wildlife in the Pacific Ocean

Oceanic plants provide habitat and food to fish and small animals of all kinds. Plant species include kelp, seagrass, and plankton are a few species of plants in the Pacific Ocean.

These can be metallic or non-metallic. Among non-metals, hydrocarbon fuels (oil and natural gas) are the most valuable. Deepwater metallic mineral deposits of manganese, cobalt, and nickel are particularly widespread in the Pacific.

Marginal Seas of the Pacific Ocean

Islands in the Pacific Ocean

Thousands of islands are present in the Pacific Ocean. Micronesia, Polynesia and Melanesia are some of these island groups. Large islands in the Pacific include:

The motionless sea of the North Atlantic Gyre is the Sargasso Sea. This region is studded with Sargassum, a seaweed that provides habitat for many Atlantic Ocean animals.

Vegetation and Wildlife in the Atlantic Ocean

Sargassum, Mosses, Seagrass, Red Algae, Coralline Algae are some of the plant species in the Atlantic Ocean.

Walrus, Dolphins, Sharks, Whales, Seahorses, Seals, Sea turtles, Bluefin Tuna are some of the animal species in the Atlantic Ocean.

Potential mineral resources of the Atlantic Ocean include deposits of petroleum, sand and gravel, phosphorite, and ferromanganese.

Marginal Seas of the Atlantic Ocean

Major Islands in the Atlantic Ocean

Between the southern tips of Asia and Africa, Australia.

Sunda Deep of the Java Trench.

The Indian Ocean encompasses one-fifth of the total ocean area of the globe. The third-largest of all five oceans of the world, it is the geologically youngest, and physically most complex of the world’s oceans.

The Indian Ocean remains the warmest ocean on earth, leading to a higher rate of evaporation. Over the years, Indian Ocean Region has become a vital hub of international trade and commerce, connecting Central Asia to Southeast and East Asia as well as to the Western World.

Vegetation and Wildlife in the Indian Ocean

Coral reefs provide feeding and breeding grounds for hundreds of marine animals and fish. The major portion of the tropical coasts is covered with mangrove forests.

Minerals of potential commercial value in the Indian Ocean region include petroleum, natural gas, manganese, tin, chromite, and monazite among others.

Marginal Seas of the Indian Ocean

Major Islands in the Indian Ocean

Covers the Arctic, and Borders North America and Eurasia

The smallest of all five oceans of the world, the Arctic Ocean surrounds the North Pole. It is mostly covered by drifting ice during winter and has the coldest temperatures among all the oceans.

Vegetation and Wildlife in the Arctic Ocean

The Arctic Ocean has relatively little plant life since it receives very little sunlight. During winters, the ocean is almost covered by ice, leading to a further shortage of sunlight. Still, varieties of vegetation and animals adaptable to the region, flourish in the ocean.

Animals such as whales, seals, walruses, polar bears have their home in the Arctic Ocean.

Marginal Seas of the Arctic Ocean

Major Islands in the Arctic Ocean

The delicate ecosystem of the Arctic Ocean can be easily disturbed by human activities leading to climate change. The melting of large icebergs is a bitter reality check.

Also known as the Antarctic Ocean, it is the youngest ocean of all five oceans. The Southern Ocean was recognised by the National Geographic Society.

Encircling the South Pole, the Antarctic Ocean remains covered by ice sheets and icebergs during the winters.

Vegetation and Wildlife in the Southern Ocean

Plants and animals adapted to the extreme weather conditions of Antarctica survive here.

The dryness and low temperatures lead to very little diversity in the Antarctic ocean as compared to other regions of the world.

Lichens, mosses and liverworts, algae, kelp and microscopic organisms make up most of the flora.

Animals in the regions include penguins, albatrosses, blue whales, sharks and fur seals.

Resources like gold, platinum, silver, copper, iron and more are yet to be exploited.

Marginal Seas of the Southern Ocean

Major Islands in the Southern Ocean

Threat To The Oceans

The oceans of the world are prone to severe threats as a result of our reckless activities. The activities that we try to justify in the name of development and human welfare, ultimately lead to disruption and over-exploitation of the environment.

Let us discuss the major issues concerning the oceans.

Climate change represents the greatest threat to ocean ecosystems. It makes the oceans of the world hotter due to global warming. Dissolved oxygen levels are continuously reducing in the ocean waters, leading to breathing issues in marine animals.

Around 8 million tons of plastic are released into the oceans of the world every year. This contributes to more than 80% of all marine debris from surface waters to deep-sea sediments. This ocean plastic injures and kills marine life including fish, mammals, birds, and other organisms. Thus, the plastic that we use daily, severely damages the marine ecosystem.

Overfishing poses a major threat to ocean wildlife, livelihoods and seafood for future generations. Overfishing leads to insufficient breeding, which cannot sustain a healthy population. Once plentiful species, like bluefin tuna, are now becoming increasingly endangered. Illegal and unregulated fishing has resulted in these extreme consequences.

One-third of the global carbon dioxide emissions are absorbed by the oceans of the world. Surely this keeps our atmosphere cooler, but unfortunately, it increases the acid content of the oceanic ecosystem.  This directly leads to the calcification of organisms like corals.

All these problems together contribute to a bigger issue of the destruction of the habitat of marine organisms. Coral Bleaching is an adverse impact of marine pollution. The vibrant colours of coral reefs are getting destroyed, resulting in a serious effect on coral ecosystems worldwide.

How To Protect The Oceans Of The World?

After knowing about the dangers that the global ocean faces, you might be feeling disheartened. But there are some ways we can contribute our bit to save our oceans.

We need to bring about behavioural changes to make an impact. As an individual, you can include these traits:

Oceans of the world are the life-supporting agents of humanity. But today the global ocean needs our support due to the increasingly negative impact of human activities on marine ecosystems.

Therefore we, as the responsible beings of this planet, are obliged to take action to avoid further loss of oceans of the world.

If you liked this article, be sure to read more articles on our website.