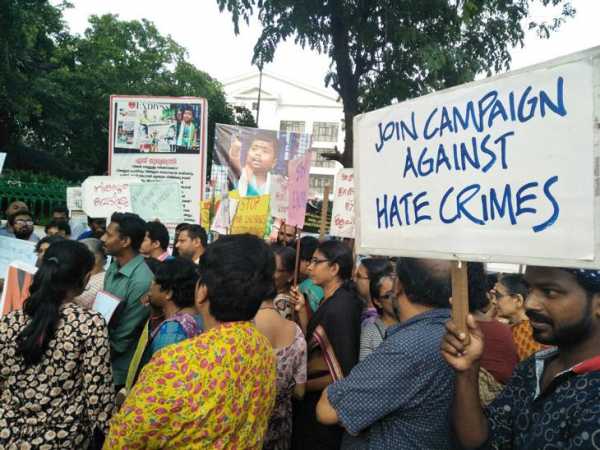 At the outset, let us tell you that we aren’t “left”, “liberal” or anything else. We just hate “hate”. We hate the nonsense coming from those Imams (there, we said it) and we hate the stupidity coming from believers of other religions as well.

Let’s not feign that lynchings aren’t happening. It’s recently reported that 97% of cow attacks after 2010 happened in the last few years, since the BJP rule.

Surely, something is wrong?

The Frustrated Indian is one of the most followed Right Wing pages out there, and it’s the page most right wingers follow when online – at the time of writing, it has a whopping 1,054,231 followers.

Yet, the hatred that spews through all has to be seen. Yesterday, we had the “Not In My Name” campaign gaining steam, with thousands of protestors across ten different cities protesting against the recent intolerant culture prevailing in the country. Here is how the event unfolded – the #NotInMyName event, as you can see, was not just against Muslims, but against the communal atmosphere in the country, including caste-based violence and mob lynching.

Here is a picture of the said event. Right wing channels though, seem to think it’s only against Hindus. The Frustrated Indians ran this cover photo:

If you place animals rights above human rights, you’ve a problem. Sure, animals need to be looked after well, and they need to taken care of – but not at the expense of human murders.

And the comments of their readers will surprise you. Here, have a look at what many have to say!

Let’s be honest – even if Right wings think that Hindus are being subjugated by Muslims, does that give them the right to lynch them? You’ve your own Government in power, why not have policies that treat everyone equally, without favouring any particular community? Vajpayee did that pretty well, and everyone respected him – even Kashmiris.

By not supporting protests against mob lynchings and communal violence, you are in fact supporting these to take place more – the same as how many white people protest against #BlackLivesMatter. It is a problem, and thinking that “they deserve it” or “we have to give it back to them” isn’t the solution.

The Question of Eating Beef

If you believe Hindus don’t eat beef, you’re wrong. Hindus have, since the ancient times, and while you’ve every right to not eat one should you choose not to, you cannot dictate it to others. Keralites and North East Indians survive on Beef – and we never had a problem with that before. India is built on secularism and love with different cultures, and a harmony to live with each other.

If the majority of people in your State do not want beef and it isn’t in their tradition, ban it, but don’t spread your ideology to other States or think beef eaters as “murdering your mom” and who need to be punished by lynching. No, they are simply people who have different beliefs to yours – and aren’t inferior to yours in any way.

Stop your belief imposition on others – that’s what you despise those Islamist rules of yesteryear for, right?

To be honest, Saudi Arabia isn’t a great role model to follow. So, if you begin an argument by saying it’s what Islam does, no it doesn’t. Have a read about Tunisia – another Islamist country. Islamist terrorism IS a problem, but we can’t look at extremists to become one ourselves. That’s not India.

We have to fight extremism – no matter what the source, and let’s join hands to do it. Let’s fight Islamic terrorism and extremism (there, said it again), but not look at it to fund Hindu terrorism or any other form of terrorism, for that matter.

The protests were perhaps there because Hinduism is a religion of peace, and we were never taught to murder somebody over our beliefs.

Protest against all wrongdoing, and if you feel something isn’t highlighted, do your bit to make it heard. But judge a protest in its own light – and independently.  Let’s all love each other, and respect each other’s choices – and have a Government that treats everyone equally.

Also check out, World Dictators of All Time