Presidency University & The Culture of Student Politics in India

Nupur Chowdhury
An eccentric writer of quirky tales, who likes reading, writing, talking, shopping and singing tunelessly in the shower.

The following is an opinion piece by one of our writers and Icy Tales does not necessarily subscribe to the views expressed in the article. 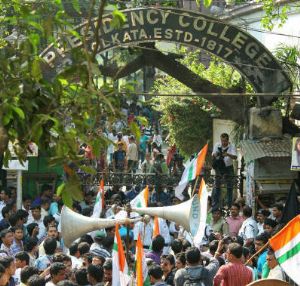 This lack of autonomy in education has led to unnecessary and in some cases rather radical politicization of the institutes of higher learning, and the resultant push-back from the students. Not even the best and the brightest, such as the students of the IIMs, are spared in this incessant drive towards ever-increasing Government control.

Politicized student unions are no novelty in India’s education landscape. These unions have been accused of, among other things – disrupting and boycotting classes, hindering exams, actual violence and intimidation of students and faculty with the blessings of the ruling party as well as the destruction of public property and disruption of traffic through aggressive rallies, etc.

Given such a dire situation, it is no surprise that students are becoming further radicalized, or that they are dissatisfied with the system. Universities must not become places that spit out professionally capable but thoughtless robots at the end of every session. Students must be politically and socially aware, they must strive for excellence and reform, not only in academics but also within the system that breeds them. However, democracy isn’t a buffet dinner, where you can eat the dishes you like and leave the ones you don’t. If we want democracy and the rule of law to prevail in society, we must respect the rules of such a system even when they work against us. The accusation of the students of Presidency University, of police atrocities committed against them, are indeed very serious. Using force against unarmed students by the police force is absolutely unconscionable, and must never be tolerated. And yet, when we assert this, how can we, in the same breath, accept the use of force by the students upon unarmed members of the faculty? No matter what the grievances they might have had, gheraoing and forcefully holding someone in captivity for hours against their will just because you don’t agree with them must amount to unlawful detainment. If this had been done by the police, if a citizen had been detained overnight without a proper warrant, we would (rightly) be decrying their abuse of power. How can that suddenly be seen as acceptable behaviour when committed by a student body rather than a law-enforcement organization? 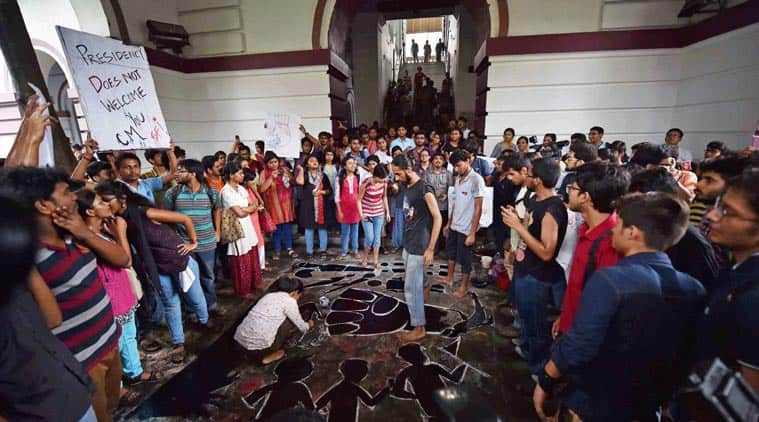 Voicing of political dissent is an important part of any democracy. The voices of dissenters must never be silenced; they must always be given a platform to present their opinions, no matter how unsavory those opinions might be to those in power. That is the basic cornerstone of a functioning democracy. However, the dissenters also have a responsibility not to abuse the very system that gives them the right to voice their dissent. Students of any institution might well oppose the Government or the authorities in power, but they must do so peacefully. Forcibly and unlawfully detaining individuals without a fair trial due to a difference in opinion is the act of despots and tyrants; it should not become the modus operandi of those that hold the future of our country in their hands. If their idea of resolving disputes is by gheraoing their opponents and refusing to let them go until they agree to their demands, this country’s future is in some serious trouble.

If the administration commits any atrocities upon political dissenters, this should be resisted and opposed through legal means. Courts must be moved and the media must be called upon to expose such abuse of power by the ruling party. However, we lose the right to oppose the Government’s unethical use of force, when we become involved in the very things that we accuse the administration of doing wrong. As such, regardless of the circumstances, the overnight gheraoing of the VC at Presidency University by the students must be denounced, for the sake of the democratic principles upon which this country was founded, if nothing else. Political awareness and activism must never be conflated with the use of violent force, and it must not be seen as an acceptable way of voicing dissent. At the same time, the Government must realize that over control and stifling of students’ voices leads to nothing but dissatisfaction and frustration among those who shall form the future of our nation.

An eccentric writer of quirky tales, who likes reading, writing, talking, shopping and singing tunelessly in the shower.

Share
Facebook
Previous articlePassenger Who Tackled Gunman: Says He Acted On His Instinct
Next articleSoulmate – Just Another Word…