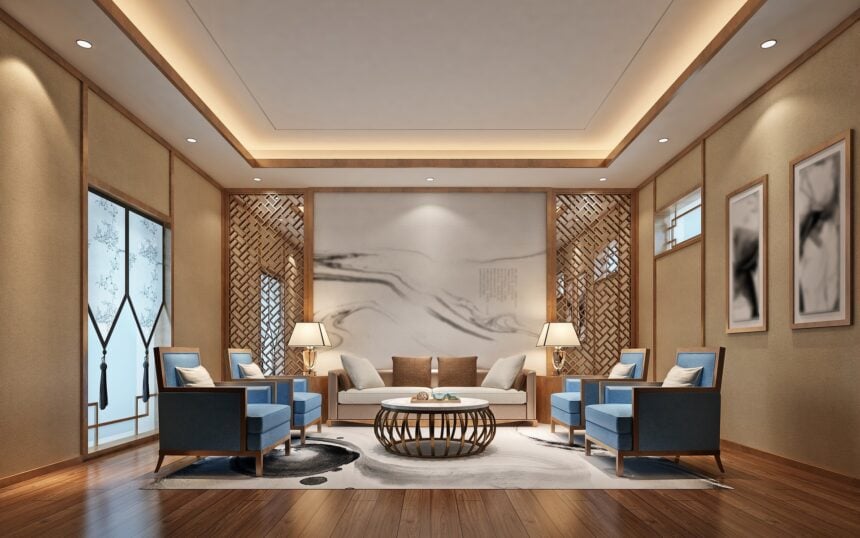 The irony of our world is that people strive for grandeur even as they ignore that simplicity is essential in every facet of life, including the design of your home. Also, the beauty of simple false ceiling designs with lights that have a contemporary layered appearance and can be used in the bedroom, kitchen, living room, and hall, among other places, is not recognized nearly as much as it should be.

For the vast majority of us, the first thing that springs to mind when we think of the ceiling in our houses is white and flat. Some of us may even be cursed with the dreadful popcorn ceilings; if this describes your situation, check out the instruction on how to remove popcorn ceilings.

Few people consider the possibility of installing an unusual ceiling design in either their bedroom or living room. When designing our houses, ceiling designs are often the last item on our minds.

However, a well-designed, simple false ceiling design can lend a space a one-of-a-kind personality that any amount of artwork or furniture cannot replicate. You can have the appearance you want without performing a major overhaul of your home if you have a fantastic, eye-catching ceiling design.

This is one of the advantages of having a simple false ceiling design that stands out. There are many fantastic options to save money, such as purchasing stick-on coffered ceiling tiles that can be painted any color or even these easy DIY crown molding trim projects.

Alternately, if you are looking for something more elaborate, you might pick gold tiles that are encrusted with designs or ornamental trim that is royal in appearance. Last but not least, if you feel ready to leap, you may hire a contractor and have the whole ceiling redone! The limit is the sky (or the ceiling instead) itself.

To demonstrate the visual superiority of straightforward artificial ceilings, here are ten false ceiling designs sure to get your spirit moving.

1. What is a False Ceiling?

A false ceiling is constructed such that it may be installed below the existing ceiling. The term “dropped ceiling” refers to a simple false ceiling design often supported by wooden or metal frames. Because it creates the impression of a lower ceiling and occasionally leaves portions of the original ceiling visible, this kind of false ceiling design has been given the name “dropping ceiling.”

When determining the simple false ceiling design for cost per square foot, several different parameters are considered. These are the following:

The pricing will need to consider the kind of glass used (clear, opaque, textured, etc.), in addition to the size and brand of glass used. However, although acrylic may be a less expensive alternative to glass, it does not have the same capacity to disperse light as glass.

There is also the possibility of using fiberglass, a composite material often used in industrial and commercial construction.

The current trend in high-end residential construction is leaning heavily toward designs that are simple, single-level, and spotlessly clean. The goal is to achieve seamlessness in integrating the light fixtures.

As a result, the attention is placed not on the ceiling pattern but rather on the lights themselves. In light of this development, gypsum plasterboard has emerged as the material of choice for use in residential and light commercial construction.

You may combine gypsum with other materials such as plywood (to create levels on the sides or for a wood finish pattern), glass and acrylic (as ornamental insertions or to filter light), and even prefabricated elaborate ceiling panels if you still want to add some fancy components (modern replacement to decorative pop moldings).

There is also the option of using raw gypsum and finishing it with textured paint or wallpaper.

Using profile lights is a straightforward method for accomplishing a contemporary simple false ceiling design. They work well as bedside lamps in the bedroom. Controlling the intensity of the light emitted by these lights is another feature included in the package.

Consequently, simple false ceiling design that uses profile lights and bedrooms are a match made in heaven. In addition, installing even the most basic of artificial ceilings may help your home or business area seem more organized and less congested.

When someone discusses carvings, the first thing that pops the ceiling into your head is likely intricate designs like geometric or floral patterns. However, you can also utilize this method to create a simple false ceiling design for the hall that is simple but quite effective.

For instance, this grey ceiling has been given a clean and attractive appearance by having white carved borders highlighted around it in the living room. Recessed lights may serve as excellent examples of simple false ceiling lighting in the architecture of a hall.

An extended panel is the greatest simple false ceiling design idea for a bedroom. In addition, it improves the overall aesthetic of your bedroom and living room, particularly when it’s constructed out of wood as this one is.

This room has simple false ceilings that are hung from the ceiling above it and has cutting edges and an uneven pattern carved on it. In addition to that, splash a little bit of color into the space on the outer tray ceiling.

The horizontal stripes of black and white and the continuous bands of blue in this ceiling pattern alternate the room with one another. Any common space may be made to appear more inviting by doing this.

3.6. False Ceilings that Are Monochromatic

This false ceiling design with an aquatic motif crosses the line between straightforward and eccentric in its execution. The artificial ceiling is made of wooden panels that have been painted a light blue color.

The ground, walls, shelves, and fans for the living room are all the same color, blue, creating a homogenous effect throughout the space.

Using a silvery base will give your false ceiling an ultra-modern look. This kind of metallic ceiling is an attention-grabbing example of a fake ceiling design. In addition to that, please pay particular attention to the lighting since it causes the ceiling to shine.

This hardwood ceiling is the ideal source of inspiration for ceiling designs that are sophisticated but simple. For a stylish dining space, this contemporary and uncomplicated fake ceiling design for the dining hall has wooden beams arranged horizontally and running parallel to each other.

Get this blue ceiling design that is easy if you want your space to have a dazzling and dewy appearance. Install some yellow strip lights to make the space seem more open and cheerful. The additional dramatic impact may also be achieved by cove lighting that slopes downward towards the floor.

3.10. Artificial Ceiling with Many Layers

If you have already put a lot of emphasis on the other four walls of your bedroom, you should tone it down with the fifth wall so that it doesn’t appear like it’s been overdone. As a result, you may use these straightforward ceiling designs for bedrooms with several levels.

You may also color the boundaries of each layer to illustrate the transition between the layers rather than using various colors of false ceilings for each layer. This is another option.

In addition, improving the overall appearance of the straightforward ceiling design by installing artificial ceiling lighting, such as a stunning chandelier, works wonders.

The ceiling designs that we have provided in this post are evidence that less is more when it comes to designing a ceiling. In-ceiling design, one should not overlook the value of simplicity. After coming to this conclusion, we decided to list the greatest ceiling design options.

After all, there is a sound theoretical basis for making simplicity an essential component of contemporary design. Straight lines and cuts are used extensively in constructing simple ceiling designs.

Lighting innovations such as profile lighting, strip lighting, cove lighting, and recessed lighting all play a significant role in contemporary ceiling design. In addition, you can always add a touch of majesty to your fake ceiling by installing some stunning chandeliers or pendant lights! Included in this category are designs comprised of parallel lines and outlines.

We want to thank you for taking the time to read this post, and we hope that we have been able to satiate the natural curiosity that drove you to do so. These easy and simple ceiling designs are meant to encourage you to come up with your own.