Looking to play gully cricket but wondering what the rules are? No, the regular rules of cricket don’t apply here – as any cricket fan in India will tell you. So, what does gully cricket consist of? We take a look at it in this complete guide to gully cricket.

One of my most treasured memories growing up is playing cricket with my friends. And I am sure, just like me, there were countless other children whose favourite part of the day was to grab a pair of bat and ball and just play.

After all, cricket is the most loved sports game in the Indian sub-continent. And gully cricket has got a huge fan following. If you are playing cricket in India, you need to know the innovative rules of gully cricket. Don’t worry, this complete guide to gully cricket will help you get started.

But cities are packed, and often people find it difficult to get a playground to play it. However, cricket fans always have the spirit to play cricket. It’s also the reason why Gully (street) cricket came into existence. In Gully Cricket, the basic structure of the cricket is followed but almost all the rules are improvised to adapt to the streets. 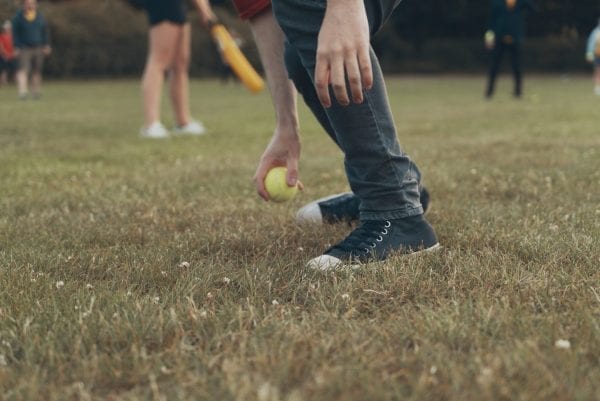 The Complete Guide to Gully Cricket You Need to Read

Here is the complete guide for you on how to play cricket in your Gully.

Unlike actual international cricket where the stadium is a well-defined entity with proper boundaries, things are a bit different here in the Gully.

There is no specified playing area in Gully cricket. Period. You need to improvise, adapt and overcome.

Anything in the proximity can act as a boundary. Different objects from house doors to your neighbour’s old scooter can be assigned a different number of runs based on the difficulty of hitting those objects.

Unlike cricket stadiums where they have a limitless sky to their benefit, here in gully taking the aerial route may not be a viable option due to the presence of terraces and balconies. The ball’s return is next to impossible if it goes to these kinds of places.

It is not specifically necessary for your bat to be an international standard English willow. Any bat is good as long as it hits the ball. Well, even if a bat is not available, any plank of wood or plastic will do the work.

While in the case of bats, it was not necessary for the bat to be of international standard. But here taking balls into consideration, it should not be a big red ball of leather that feels like a brick. Tennis balls are often used while playing cricket in the streets. They are safer and easy to hit. And most importantly, they are cheap and easy to find.

You can make anything to be the wickets. If plastic or wooden wickets are available its all well and good. If not, wickets made of bricks will do the work. If even bricks are not there, two slippers kept at a width of a standard wicket with nothing in between them are fine too. If no one is willing to give up their footwear, a simple chalk drawing of the wickets on a wall is enough.

It is most probable that you will be laughed at if you play on streets wearing gloves or pads. 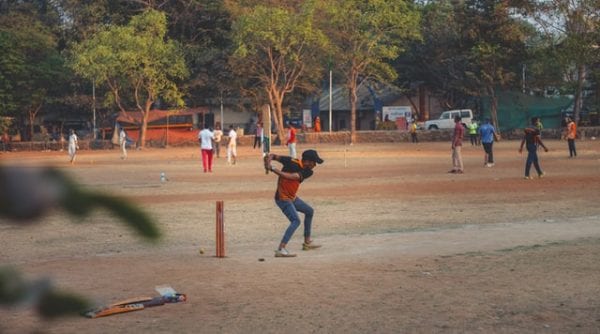 The Rules of Gully Cricket

Now let us get to the more interesting aspect of Gully Cricket, or its rules. Remember, these rules and norms in Gully cricket vary from place to place. However, there is a basic set of rules that is followed everywhere, where this form of cricket is played. There are said rules and also the unsaid ones. The said rules will be repeated before the start of every match while it is expected from you to understand the unsaid ones.

The one tip (bounce) one hand rule

This is one of the most iconic rules of Gully cricket. If the batsman hits the ball and a fielder catches it after it bounces just once, then the batsman is declared out. The fielder should apply only one of his hands and no other body part should touch the ball. This rule emphasises the fielders to be extra agile and forces the batsman to hit ground shots. Why ground shots? I will elaborate in the next point.

No six rule in Gully Cricket

While mentioned earlier why it is not profitable to hit a flying shot because of the risk of losing the ball, there are some other factors too. A shot intended to be a six is hit with more power. This can injure other players or people on the street. It can break window panes or can even dent a car.

In most places, the umpire is selected from the batting team. This is one of the most controversial rules in street cricket because unlike the international version of the game, umpires here are not neutral. Often this umpire will give decisions in the favour of his team which will result in a conflict between the two teams.

Many times, a wicketkeeper is also selected from the batting side due to shortage of fielders on the bowling side. This may also result in dispute as the wicketkeeper may drop the catch of his buddy knowingly.

To compensate for the no six rule, the duggi or the hit-two rule is 0applied. Objects which are easier to hit like a nearby wall or tree are assigned two runs. There is no need to run if you hit these objects as your score will be automatically up by two runs.

For the strict enforcement of the no-six rule, boundaries are made after which direct shots are considered out. Also, directly hitting delicate things like cars or window panes results in the conclusion of the batsman’s innings.

This rule comes into play when there is an odd number of players present. The last player which was not chosen by either of the two captains plays as a Joker. This Joker will bat from both sides and also will field for both the sides. Often, he is not allowed to do the bowling.

The toss is done only in the first match of the session. After that, the winning team is allowed to bat first. They can also select to bowl first if they have a different strategy against the other team. But the decision always rests in the winning team’s hand. 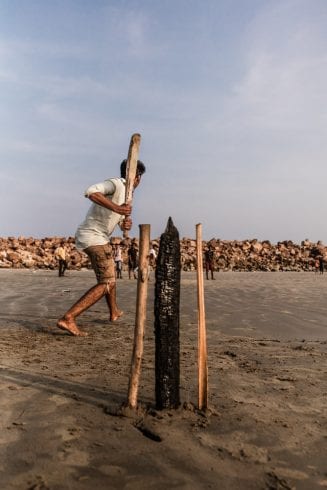 The Unsaid Rules of Gully Cricket

As mentioned earlier, these rules are not mentioned before the start of every match. Every player has a general understanding of such rules.

The one who bats first:

It is the most common unsaid rule. The one who bats first for his team is not allowed to bowl first when the chance comes. I think this done for equal distribution of the responsibilities.

The one who brings the bats:

The owner of the often has the upper hand over the game. He should be treated with respect as he has the power to walk out of the game if things do not go according to his likings. This may then hinder the course of the game.

The one who brings the ball back:

Anyone who is responsible (more often it is the batsman) for the ball going to places from where it is difficult to retrieve it back, has to bring it back from there. He or she can take the help of his or her buddy.

The one who buys the ball:

The one who loses the ball, buys the new one. Period. There are no ifs and buts in this. If the ball is lost by someone, he has to but the new ball no matter how old the ball was.

If the ball has worn out and is no more fit to be played, the entire cost of the new ball is divided among the total number of players.

The Different Forms of Gully Cricket

Gully cricket is mostly played in three different forms as mentioned below:

The general form of Gully Cricket

Here, all the players are divided into two teams. The team which scores a greater number of runs in the given overs is declared the winner.

The miss-out form of Gully Cricket

In this form, players are not divided into teams and there is no concept of hitting the runs. Each player gets a chance to bat. If the player is unable to connect the ball with the bat, he or she is declared out. The one who faces the greatest number of balls is declared the winner.

The short form of Gully Cricket

This form is applied when the place to play is too confined. A boundary is specified hitting the ball directly over it is considered out. Also, the ball is bowled under-arm here.

You just need a bat (or a bat-like thing), a ball and your friends. Gully cricket is compact but fun. It gives you that adrenaline rush and you are going to have a ball(pun intended) when you play it. So, how did you find this complete guide to gully cricket? Did it help you?