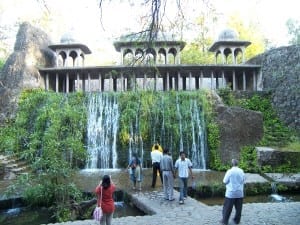 Anyone with a garden – or frankly, anyone who lives and breathes – has likely heard of or partaken in the trend of having garden gnomes. These cute little decorations have made their way from being creatures of folklore to brightening up gardens all across the world, and it isn’t difficult to understand the charm. But why do we keep Gnomes in the garden? What exactly led to people putting out statues of little men in pointy hats and beards to peek out among the bright foliage and teak garden benches? You’ll have to read on to find out.

The act of putting out statues that represent mythical creatures has been around since as early as the renaissance. The likes of Gods, Goddesses, fairies, dwarves and more have all featured in garden-ornament fashion – In fact, even statues of the god Priapus were found in gardens in Ancient Greece, but the production of the modern garden gnome didn’t start until around 1840 in Germany. There are millions of gnomes in Germany alone, and this had spread significantly not just to the rest of Europe, but to the United States too.

But, gnomes aren’t the only creatures you’ll find brightening up gardens all over the world. Northern Europe has a thing for dwarfs, Ireland of course have leprechauns, and Scandinavia dabble in the likes of the ‘Nisse’ or ‘Tomte’, especially during the month of December!

In the way of garden gnomes, however, you might be pleased to know there are actually famous garden gnomes – sort of. In 1847, Sir Charles Isham bought 21 garden gnomes in Germany and brought them over to the UK. After placing them in the garden at Lamport Hall in Northamptonshire, they have been there ever since. Well, at least one has! Lampy, the last standing of these 21 gnomes is insured for over £1 million!

The Symbolism You Never Knew

At a base level, garden gnomes are a symbol of good luck. As well as providing a pop of colour amongst the green of your garden, garden gnomes have been thought to provide protection – and this can be drawn from a similar thought from gnomes in general. They were thought to provide protection for buries treasure and minerals in the ground, and so the ceramic charmers we use today are used to watch over crops and livestock – some even tuck them up in the rafters of a barn!

While the world has arguably become more cynical in the way of mythology, garden gnomes provide a connection to an older way of life. Farmers used to use good luck charms all the time, and gnomes were even thought to provide help to gardeners during the night!

What else could you want to know?

To round this all off, we’ve decided to dig a little deeper into the world of garden gnomes and give you just a few facts that you probably didn’t know you wanted to know!

And that’s just about everything you could need to know about the significance of garden gnomes! Of course, for those who are interested there is plenty more information and for those we haven’t managed to convince – go forth and join your garden snob brethren!