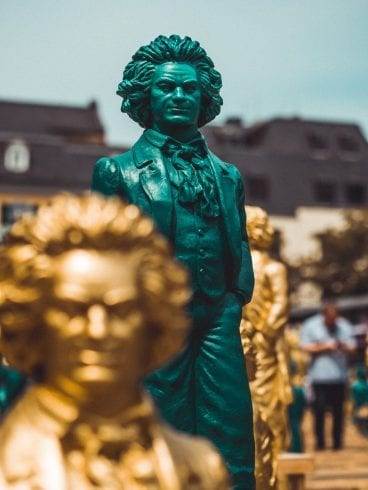 Disability just exists in your mind. You are the only obstacle in your way and this is proven right time and again by numerous great people throughout history.  From Stephen Hawking and Helen Keller to Tom Cruise and Stevie Wonder, they have asserted themselves in the society without letting their shortcomings bog them down. Did you know about the top 5 famous disabled persons in history? The life stories of these people with their remarkable achievements have been told and retold to inspire people.

Here’s a glance at the Top 5 famous disabled persons, some of the most remarkable personalities with only unbeatable spirits and relentless talents. 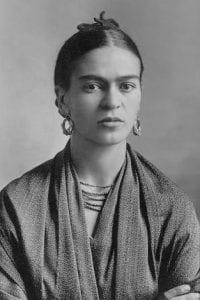 Frida Kahlo was an artist, political activist and feminist born in Mexico in 1907. She was taken ill by polio at the age of six, making her right leg smaller than the left one. Despite this, her father encouraged her to swim, play sports and wrestle, which was unusual for girls of that time.

She began studying natural sciences at the National Preparatory School to become a doctor. At that time, it was the very first intake of girls at the school, and this was where she first met Diego Rivera, the mural painter who later became her husband and supported her till the end.

A bus accident in 1922 left her seriously injured, and she was hospitalized for several months. This was the time when she began exploring her talent for painting to pass the time in the hospital. A canopy was raised over her bed with a mirror where she could see herself. As she was the subject she knew best, she began painting herself in different life situations.

Her health deteriorated further, and she portrayed her inner struggles through paintings. Her spinal injuries which made her wear corsets was characterized by “The Broken Columns” while, her miscarriage was brought to display with “Henry Ford Hospital”. Similarly, Kahlo’s failed spinal surgery was painted in “Tree of Hope, Remain Strong” depicting that despite the pain, she stands firm. Other works of self-portraits also illustrate her state of mind in several situations. 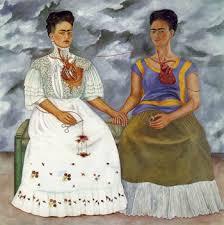 Kahlo’s paintings have a strong presence of surrealism, symbolism and magical realism. Her notable works include “What the Water Gave Me”, “Self-portrait on the Borderline Between Mexico and the United States”, “The Two Fridas”, “Self-portrait with Thorn Necklace and Hummingbird”. Her work can be described as “confessional” like confessional poetry.

Sadly, this wasn’t the end of her afflictions. In 1950, her left leg had to be amputated due to gangrene. Even though she was depressed, this did not falter her progress. She continued painting and remained politically active. At her solo exhibit in Museum of Modern Art in New York, she visited it on an opening day through an ambulance.

The Louvre purchased her painting “The Frame” first-ever from a Mexican artist. Her work became more popular posthumously, especially during the 1970s and the Feminists movement in Mexico made her an icon. After 1980, Frida Kahlo’s works became the national heritage of Mexico. A Hollywood movie ‘Frida’ starring Salma Hayek as Kahlo was released in 2002 and won numerous awards. 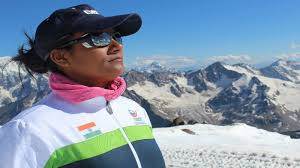 The former volley ballplayer, who aspired to join paramilitary forces, lost her leg in an unfortunate train accident. A gang of robbers pushed her out of the train when she refused to hand over her purse and gold chain.

During the recovery from this accident, she made up her mind to climb Everest and began preparing for it with help from Bachendri Pal, the first woman to scale Everest.

Now, a motivational speaker and recipient of the Padma Shri and numerous other prestigious awards, Sinha wants to start a free sports academy for the poor and differently-abled. She donates all her finances to the cause. Her inspiring life story is compiled in a book that she penned “Born Again on Mountain.” She is truly an example of one of the famous disabled persons.

You’re familiar with this name. You might have even heard some of his famous compositions Fur Elise or the Moonlight sonata or several other creations. These original compositions are pleasing to listen to and hard to replicate even after months of practice by skilled pianists. Beethoven is undoubtedly one of the prominent and influential figures in the musical history of the west and was known for his quick temper and eccentric attitude. He is the bridge between the classical era and the romantic era of western music.

Unbelievably, some of his greatest works were created while he was going deaf. As hearing is an essential sensation for a musician, Beethoven tried hard to conceal his loss of hearing. He finally admitted it in his letters to his near and dear ones. Through these correspondences, it is derived that Beethoven became completely deaf by 1816.

Astonishingly, it was after the advent of his deafness, that he crafted several of his masterpieces including Fidelio, the only opera by him, six symphonies, six-string sonatas, seven piano sonatas, four trios (including the Archduke Trio), over 70 songs and numerous other compositions.

Beethoven debuted his Symphony No. 1 in 1800 in Vienna, and since then his fame spread far and wide until he covered the musical scene of that time like a colossus. Some of his other famous compositions are Eroica: Symphony no. 3 in the honour of Napoleon, The Creatures of Prometheus (ballet), Ode to Joy: Symphony no. 9, Missa Solemnis and Symphony no. 7.

Nick Vujicic was born without arms or legs, a rare condition called Tetra Amelia Syndrome. He is an evangelist and a motivational speaker and has delivered lectures in over 50 countries on several subjects like persistence, strong determination and most importantly, positivity.

Here’s a quick guide on which positive personality traits you should inculcate. Click here.

Nick’s childhood was lonely, and he battled depression because of the teasing and bullying at school. He says that his family’s constant support and faith in the Almighty helped him overcome all his barriers and struggles. Despite the disability, Vujicic says that he has built a “ridiculously good life”. Nick paints, swims, skydives and surfs like any other average person. He is happily married with four kids. He radiates unstoppable energy and is full of life

Vujicic has authored seven books including ‘Life Without Limits: Inspiration for a Ridiculously Good Life’, ‘Love Without Limits: A Remarkable Story of True Love Conquering All’ and has starred in short documentaries. He founded “life without limbs” Non-Profit Organization that campaigns against bullying and a motivational speaking company “Attitude is Altitude.”

The familiar face from Netflix’s top series “Stranger Things”, ‘Eleven’ recently revealed in an interview that she is partially deaf. She was born with partial hearing in one ear and gradually lost all hearing over the years.

Despite this, she loves acting and singing. She even performed a part of Nicki Minaj’s verse in Monsters.

She is just 13 and yet she has achieved a lot. Millie Bobby Brown has a Primetime Grammy Award to her name and was featured in Time 100 most influential people. She is already UNICEF’s Goodwill Ambassador.

These are the top 5 famous disabled persons who have their own story and have successfully tackled all the odds. They have been a source of inspiration for many and continue to be role models for many.