5 Types of People You’ll Meet on a Bus 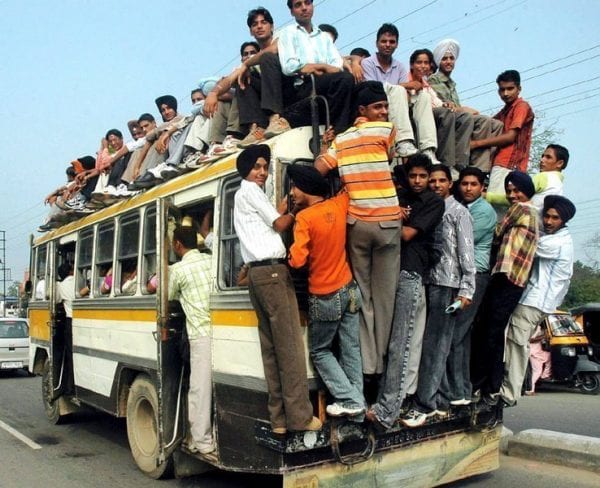 If you regularly travel by public transport, sooner or later you are bound to meet certain stock characters that are available in one form or the other in every part of the world. These are real, living people who behave in such profoundly stereotypical ways that they might as well have stepped right out of a P.G. Wodehouse novel!

Here’s a list of some of the people you might encounter on a bus during your daily travels to and from the workplace:

This is that one person who has been traversing this very route since you were in your diapers. She knows the game better than anybody else knows it! From the moment she steps onto the vehicle, you will know that you are in the presence of superior intelligence. She will skillfully maneuver mewling babies, sidestep raucous schoolboys, dodge swinging bags and water bottles before elbowing, shouting, cursing, and bribing her way into the most comfortable window-seat in the vicinity. This is the co-passenger you must befriend before coaxing them to teach you the tricks of the trade. You’ll spend the rest of your bus-riding days in blissful window-seated comfort. 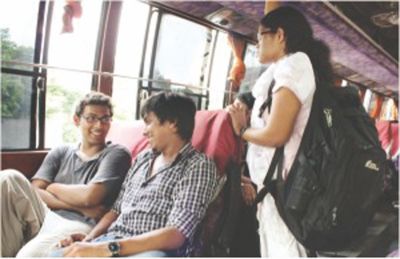 This is the new kid in class: that unfortunate soul in any setting who is relentlessly bullied and harassed by all until someone newer comes to take their place. This is the person who you will most often see staring anxiously out of the window, questioning fellow passengers at every stop about the next one. You can spot them easily enough because they’re that one person on the bus who gets elbowed the most but never actually manages to secure a seat, mostly because their reflexes haven’t yet developed to be fast enough for the arduous task of seat-grabbing! This creepy dude on the bus seems to think it his social responsibility to give everyone around him a complimentary massage. The idea of consent doesn’t seem to have registered in his tiny, horny brain yet, resulting in him being frequently on the receiving end of various expletives and even the occasional slap from the surrounding females. Regardless of his skills as a masseuse, he also becomes the most likely candidate for a public thrashing at some point in time. If you ever find yourself in the unwelcome company of this gentleman, do everybody a favor and dial the nearest police-station ASAP!

The one who was born a few decades too late to be a suffragist but is determined to make up for that misfortune by fighting for the ladies’ seat with the same zeal with which her ancestors fought for the vote! It matters not if occupying one of those precious symbols of feminine liberty is a laborer carrying fifty tons of concrete, or a school-boy weighed down by mathematical tomes. The feminist shall have the ladies’ seat or die fighting the good fight. No power in the universe can make her abide by such a heinous male usurpation of female seating rights!

Ever met one of those lovely uncles and aunties on every bus who consider it their moral duty to judge every co-passenger on their choice of attire, the shade of make-up, their gestures, postures, and the exact amount of skin to be shown in their holy presences? If you haven’t, you can rest assured that you soon will. And heaven help you when you do! Because anyone who falls short of their stringent standards of good behavior can expect to receive a constant barrage of judgemental looks and whispered comments about their clothes and morality, which are actually completely audible to the entire bus. The most effective way to escape their clutches is to judge them right back and whisper gibberish with your friends as loud as possible!

Thankfully, despite the few weirdoes hanging around, almost all buses and trains also have a huge number of friendly, helpful, and kind people who will leave no stone unturned to help a fellow traveler in need. So make sure you choose your friends wisely and grab that window seat even if it costs you your life!