What Does Being an Introvert and Extrovert Mean?

Introvert is a person who is shy. And extrovert is outgoing. This is what dictionary says. If these terms are so crystal clear, why is this article for? What am I going to put in this? Well, then you are a little way off in the blur. The terms have way more than the one-line definition. There’s a lot more to dig in and you can dig it in here.

As you can see in this image what an introvert and an extrovert is. Introverts are people who are shy, they keep their things to themselves, are content being alone or have small circle of people. While extroverts are the outgoing and the risk-taking ones. But which category do you fall in? Can you characterize yourself where do you fall into? Either of the answer you select is incorrect.

There is no such thing as a pure introvert or extrovert. Such a person would be in the lunatic asylum. — Carl G. Jung

This is what Carl says. And yes it is true. We are somewhere between the two personalities. We can never be on either spectrum, we are supposed to lie somewhere in between them.

There are various theories that show differences between the two personalities, and some research has shown that our genetic arrangement has a major role in selecting which of these tendencies are strongest. It will become more easier for us to understand the terms, by finding out ways how we recharge our brains.

Introverts are the shy people, they feel relaxed when they are alone. They fuel themselves up by staying alone. While the ones with extroversion, they tend to charge themselves by going in gatherings, large circle of people, adventure and outgoings.

In the ’60s, psychologist Hans Eysenck proposed that the difference between introverts and extroverts was that they simply had different levels of arousal—meaning the extent to which our minds and bodies are alert and responsive to stimulation.

It can be seen that introverts have higher rate of arousal. This means it is easier for them to stimulate themselves. While extroverts have to put some extra effort. An introvert will get stimulated just by spending time alone, while extroverts would need to have some outgoing or adventure. Their brains also work differently. Introverts process stimulation through a different pathway than the extroverts. For extroverts, the pathway is much shorter. It runs through an area where taste, touch, and visual and auditory sensory processing takes place. For introverts, stimuli run through a long, complicated pathway in areas of the brain associated with remembering, planning, and solving problems. 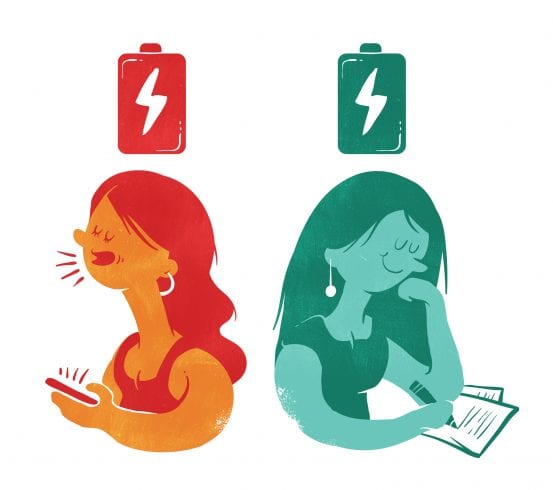 What makes someone closer to being an introvert? It is all in the way they keep things to themselves. They tend to scale up as being introverted depending on how much they keep themselves isolated. They like their own company. They prefer silence. These people are no inferior or different. They shouldn’t be let out of your circle. Respect their privacy. Let them have time for themselves.

What makes someone closer to being an extrovert? It is the way they are open to others. Outgoing and always seeking to speak their thoughts. They tend to scale up as being extrovert depending on how much they are interactive with people and things. The cannot live in lonesome. Sometimes they might seem irritating or pushy, but they should be given freedom to be what they are.

The one in between, exactly in between, has a balance of the two. And this is the perfect balance one should have in life. Know when to speak, and when to keep quiet. It’s all in what you do that tells what you are.

Be an introvert in your extroversion.