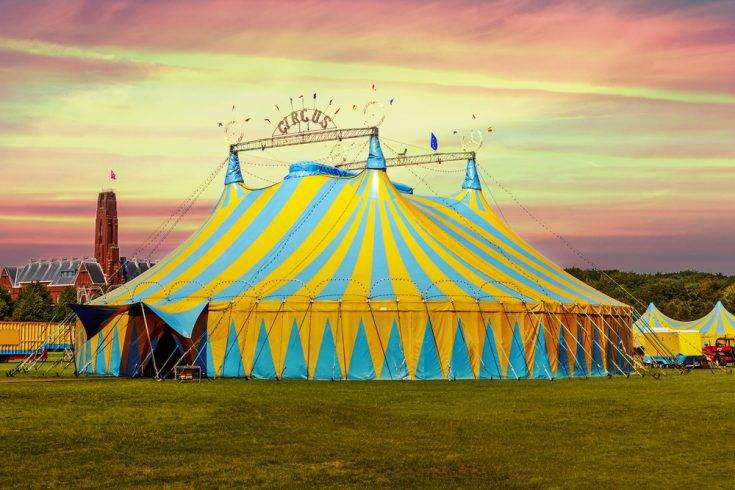 A circus is a place for dreamers. People who walk with glitter in their eyes, looking for an escape from the ordinary world they live in, experience a transition from the mundane to the exciting. The transition from essential existence to exhilarating life.

The pink ribbons flutter wildly as she raises her arms and spins. Her skirt moves in the same direction as hers. And her eyes are shimmering manifestations of that orb of light that shines in the night sky. If only the shine were natural and not just frozen images of the tears she had been holding back.

For the sheer pleasure of traveling through the cities and performing. For the applause. And for all the beauty this fabulous artform stands for. Well, I guess the light is always as bright as it appears to be on the outside.

Sarah Gruen’s award-winning book Water for Elephants takes on fantastically the circus’ dark world. As the novel progresses with the protagonist’s love story, it also takes the reader along on a journey to the unknown lanes of the circus’s sinister city.

The Benzini Brother’s Most Spectacular Show on Earth reduces a human being to a performer. Whether you’re on the stage or off, you’re nothing more than that. Animals are beaten up, and men are thrown off a moving train when they can no longer serve their purpose.

Uncle Al, the circus owner, mentally demarcates his employees into two, the dispensable and the indispensable. The latter figures human oddities, unusual acrobats, and trained performers. Uncle Al wishes to hold these people to the circus and is willing to go to any extent.

The Empire Circus elephants, horses, dogs, and cockatoos forcefully spent all their time in physical bondages. They found The Kohinoor Circus using a pregnant Royal Bengal tiger, clearly violating the Supreme Court ruling. Lakshmi, a 22-year-old chimpanzee owned by the Great Royal Circus, was discovered lying in a blood-stained bed.

Lakshmi died a few days after being rescued by Blue Cross, Chennai, and People for Animals. Another startling incident came into view in 2004 in the Great Roman Circus, which had held 23 children in captivity. Reports showed that the children were handled poorly, and girls had written to their parents about being repeatedly raped.

On receiving the letters about sexual abuse, the parents had sought Kailash Satyarthi, 2014 Nobel Peace Prize laureate. Mr. Satyarthi, along with his team, was assaulted by the circus’ goons, and the group had to escape to save their lives.

As children, we have all admired the breathtaking enigma the circus presented us with. But as adults, I believe it is imperative to take note of the other side we have been missing all along, for it is only then that we can ask for a change.

The cries of a child probably fueled the blazing lights that you see snatched from childhood covers. Those wild somersaults that you admired were probably his ways of hiding the scars that still linger. And who knows, your shouts of appreciation might be helping them conceal the cries of the pain they just inflicted on that little boy.