Eyes That Tell A Story 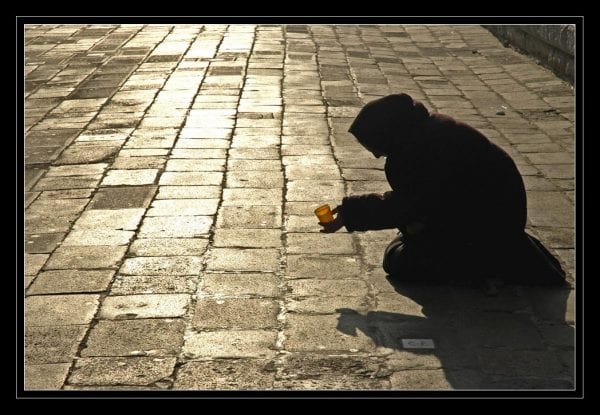 It had rained the night before and I was struggling to wade through the stagnated water on the roads. I had already cursed a million people in my head for putting me in this miserable situation. I hiked my pants higher and walked to the nearby bus stand. As I was waiting for my bus to arrive, a surprising sight met me. A little girl was sitting on the sidewalk, eating. It would have been a normal sight if it had not been for the smile that was gracing her young face. A deeply satisfied smile that reached your eyes. That image stayed with me days after. I wondered what her story was.

She walks down the busy road, her tiny figure hunched in thin rags. She looks torn and lost as her eyes wander around her at the busy road, looking wistful as she sees the line of shops that stretched alongside the road. She was a small girl who looked about the age of thirteen. Her matted hair stuck to her face and her thin dress revealed her bony figure. The most striking feature on the beautiful young girl’s face, were her eyes. Those small brown eyes were slowly losing their sparkle. Those eyes that were supposed to twinkle with innocence were now vacant for they had seen the world for what it really is. Those haunting eyes told us her misery.

Her bare feet burn at the scorching heat of summer and her throat is parched. Her stomach grumbles and she feels her profound hunger. She has not had a decent meal in 3 days. The feeling in her stomach was more than just hunger now. It was a gut wrenching pain that grew with each step she took. Fatigue weighed down on her like a heavy boulder, and her body screamed in protest. Yet, she did not stop. What else can she do? Where else can she go?

There was no place for shelter much less a place she can call a home. There was no one she could go to, no one to depend on. She was alone, plain and simple. She kept walking, searching for something, anything. Eventually, her legs gave out under her, and she sat on the sidewalk. People walked past her, some looking at her in pity while others averted their eyes from the reality. Neither bothered her. Life is unfair and she has come to accept it. The pain in her grew more acutely and so did her desperation for food. She spied a dustbin at the end of the sidewalk, in front of a small shop. She forced herself up and slowly walked towards it. She heaved a huge sigh of relief. Today was her lucky day. Somebody had thrown away a half-eaten plate of idlis. She dug further and came up with a few other food items. She gobbled up all the food quickly and felt the immense relief spread through her small body. She could not help the tears that ran down her cheeks and neither could she understand the emotions that coursed through her. She was grateful for her luck but devastated at her situation. How long could she go on like this? 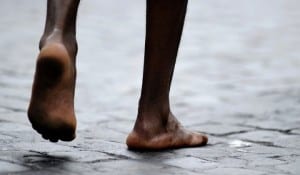 It was late afternoon when it started to rain heavily. It seemed like God was setting his wrath upon the cruel world, wishing to wash out our sins. She was forced to take refuge in the train station. The thunder rolled in one after another and lightning struck, making her jump. She shivered against the cold wind and went to search for a dry spot to sit on. She pulled her knees close and hugged them to ward off the cold. She felt the weather reflect her despondent mood. She sat there for a long time, willing and waiting for the rain to stop. A shopkeeper was nice enough to offer her some biscuits and water.  She sat there until the sky grew dark and night descended. This was not the first time she was stuck like this. At least, this time she was not out in the rain, wading through the murky waters in search of shelter as the water pricked her skin and blurred her vision. She was grateful that today was not one of those days.

However, sleeping here was not idle either. As the night grew, she knew she would have company. Many like her, homeless and desperate, will surround her. However, the leering men will show no mercy when fighting with her for space or bullying her to satisfy their needs. The police were of no help either. To them, she was just another poor heathen with no identity. Dead or alive, it did not really matter. Her choices were limited. She could not sleep that night and risk her safety. No, she could merely roam the place and keep herself warm until the rain stopped and a new day began.

She was back on the streets searching for food. The rain had made the streets intolerable. The travelers on the road had decreased in number and she felt all alone. She walked up to a woman standing nearby and tugged at her dress. She held her hand up when the woman looked down at her. She could not muster up the words to ask her for money. She was ashamed and yet so very desperate. The woman handed her some coins and walked off. She counted the coins she had saved and realized it was enough to buy something from the roadside shop. As she sat on the sidewalk, munching on her vadai, she reflected on the world around her.

She looks at the oblivious man standing at the bus stop as the passerby pick-pocketed him, the police officer accepting a bribe to let the unlicensed man pass by, auto rickshaws fighting over a petty accident. She observes a woman being looked upon by bystanders as she was harassed by a man, the traffic at a standstill as the ambulance cries pierced the air, huge amounts of litter piling the streets and open urination by upper-class citizens. She witnesses the daily routine of those around her, people whom she thought were better off than her. As she peers closely at them, she feels her self-pity wane and wither. They were no better, she decided. They may have money and luxury, but she had something pure.

She was not touched by corruption, obsessed with greed, riddled by guilt or plagued by an addiction. She was not inclined to lie for she had nothing to lose or gain. However, the world out there was filled with foolish people. Having surrounded by pomp and pleasure of the material world, they are unsatisfied. They are out searching for peace and happiness. They were holding a blank canvas without knowing how to bring color to it. She was not like them she decided. She drew happiness from little things around her. She looked down at the vadai in her hand and felt satisfied. She gave herself a pat on the back for getting so far. She was happy now, she realized and that was far from what people around her could ever feel.

That was how she brought color to her bare canvas. Yes, her life was not perfect. It was actually far from perfect, but she believed she would figure something out. Her lips tugged at the corner and she smiled after a long time. Her dim eyes slowly started to regain their sparkle.