Mona Joshi, a Mumbai-based girl, was out shopping on what she thought was just another ordinary day. Since it is wedding season in India right now, she was shopping for a ghagra at Kalki, a designer store in Santacruz. 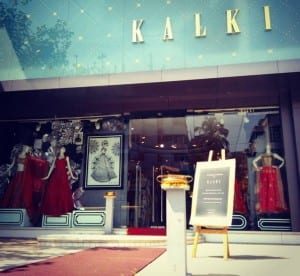 Shresht Podadar, who is the ‘Rakhi brother’ of Mona Joshi, reported this incident to the owner of Kalki Fashion through email. In his email, he says:

“These few words cited by this gentleman just changed the dynamics of her evening. This is what today’s youth refers to as ‘Fat Shaming’.

My dear sister quietly and quickly exited your store out of embarrassment. And this is unacceptable.” 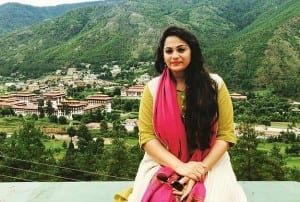 When in reality, it wasn’t Mona who had any reason to be ashamed or embarrassed. She hadn’t done a single thing wrong. It was the salesman who should have responded in a much, much better way without passing any of his unrequired judgment. In his email, Sresht says:

“In an ideal scenario, the sales gentleman should have told Mona, ‘I’m sorry madam but you may have to look at other stores.’ That would’ve reflected honesty in his character.”

Sresht said that what they were looking for was an apology from the sales gentleman. Unfortunately, Mona was unable to catch his name at that time and wished she had spoken to the store manager then itself. She intends to go back to the store and speak with the store manager.

“I felt a little angry for leaving that store without showing my discomfort with that comment because I knew that the man did not register that what he said was wrong and that he would say something like that again to another girl.” 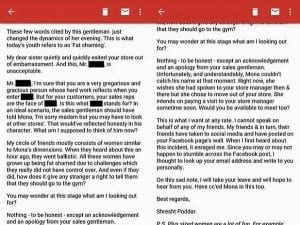 It is not only Mona and Sresht who have displayed their outrage about this incident. Many friends of Mona’s have taken to social media sites to express their anger over this incident.

“As a fashion house it’s imperative that you uphold everything that the community stands for which is about feeling beautiful in your own skin. Incidents like this only reiterate how unfeeling brands are and how they have sacrificed their humanity at the alter of what they consider ‘standards.’ It’s not okay, and it needs to stop now. “ 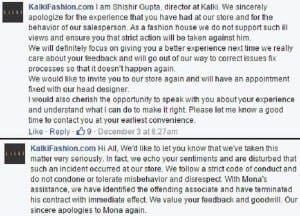 Shishir Gupta, the director of Kalki Fashion, replied to the posts and apologized for what had happened. He said:

” We’d like to let you know that we’ve taken this matter very seriously. In fact, we echo your sentiments and are disturbed that such an incident occurred at our store. We follow a strict code of conduct and do not condone or tolerate misbehavior and disrespect. With Mona’s assistance, we have identified the offending associate and have terminated his contract with immediate effect. We value your feedback and goodwill. Our sincere apologies to Mona again.”

However, this is not the first case of body shaming that has taken place and sadly, I don’t think it will be the last. This awful behavior of making someone else hate the way they are is not going to stop until people realize that they take part in body shaming without even meaning to do so. Saying stuff such as ‘aye moti‘ even jokingly, does not help people who already have low self-esteem thanks to society’s harshness. 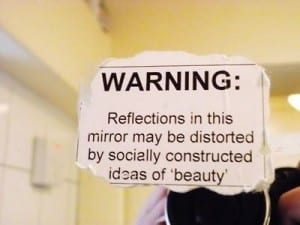 “The moment he made that remark, I was in complete shock for a while. I felt ashamed for some reason like I made a mistake by asking him for a garment in my size. In that moment, I felt like I deserved that comment.” is what Mona had to say.

The very fact that Mona and girls like her think that they’re at fault when they are body shamed for no reason, proves that there is a lot that is wrong with the society.

We do not need anyone to tell us what our ideal body weight should be, the only people who can comment on our body are us. Everyone’s opinion simply ceases to matter once you love the skin you’re living in.

Share
Facebook
Previous articleFuture Of Drones: Uncertain Or Promising?
Next articleKnow About the #100sareepact From The Co-founder Herself!