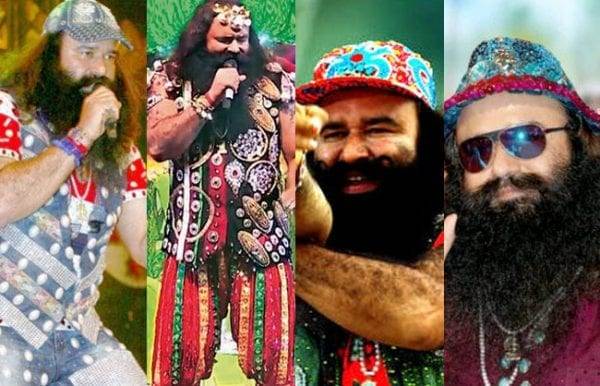 Appearing on the headlines of every newspaper and being the topic to every social media post, self-styled godman Gurmeet Ram Raheem Singh has brought unrest and chaos in the country in last one week.

The CBI court yesterday sentenced him 20 years of jail, 10 years for each case andhe also has been ordered to pay a fine of 30 lakhs. A special cell will be provided to him in Rohtak prison without any attendents.

After being convicted and being proved guilty of all the charges against him, the so called “Insaan” tried to deny all the accusations and went into a high voltage drama mode. All of a sudden he felt nauseous and had severe back pain. Apparently a few days ago on the 15th of August the baba celebrated and was found dancing and jumping on rock music, then he did not have any back ache. However, his blood pressure does keep shooting up during the hearing.

After the hearing, the man who used to claim himself a god sat down on the courtroom floor and refused to go anywhere shedding crocodile tears. Then he was forcibly taken away. The hearing of the case was done Rohtak. There were a few incidents of violence which were a great decline in the outburst from last time considering the fact that police had shoot at sight orders.

Statement of the rape survivor – “It was around 10 p.m. when I enter the Gufa, Maharaj was sitting on a bed, holding remote of TV and watching an adult movie. A revolver was lying on the pillow side of his bed. I was stunned to see this and began to feel dizzy because I never imagined that Maharaj could be like this. He said he has bestowed upon me a special favour by choosing me as his dearest sadhvi. There is no doubt that I am God When I was still not convinced, he told me he could shoot me here and now and no one would raise a finger, not even my parents. ‘The chief ministers of Punjab and Haryana and many central ministers come and touch my feet. I can get your family members removed from their jobs and get them killed if you protest.”

Further, there are allegations against Singh of mocking Sikh and Hindu religious figures, as well as Adivasi. He has also been accused of the murder of journalist Ram Chander Chhatrapati who exposed the baba in his news paper and ordering forced castrations. His Dera Sacha Sauda is the only one among the various Deras that openly asks its supporters to vote for particular political parties.

Not only that Ram Rahim is also said to have a fling with his adopted daughter Honeypreet Insan. Her husband Vishvas Gupta told media that after entering into Ram Rahim’s room one day he found both of them in objectional position. Moreover, till today Honeypreet lives at dera instead of living with her husband.

Though many people are satisfied with this decision of the court and support it, there are many people who are demanding death sentences for the heinous crimes he has committed. Baba’s lawyers are thinking of challenging the orders at Supreme Court.