Growing up, I have met countless people who believe in the man who sits on the clouds and governs the universe, although their interpretation of this is very different from mine. India, being a diverse country, is the home of many different religions; however, because of this very reason, we have seen conflict time and again in our country. It’s not just India, though, and this has been happening worldwide but is religion really to blame for everything wrong with people?

I think by now, we know what happened in Paris and then later in Syria. We all know about the countless number of innocent lives lost and why? Because religion surpasses all.

I’m not saying that we should give up religion and god and become atheists; what I’m saying is that we shouldn’t put religion above the lives of countless people. No religion propagates violence. No religion demands that all non-believers be punished. It is people who interpret it that way.

Since the age of 5, I was taught to be tolerant. Everyone has different beliefs and a different God to pray to. Please do not discriminate against them. Do not shun them. Lead a life of peace. It’s that simple. So how is it that we start blaming people for one religion when something goes wrong? I know many people who hate Muslims just because they are Muslims. How absurd is that?

They could be the kindest people ever, but you can’t look past the religion that they follow. Even in India, there have been countless occasions of religious violence. When her bodyguard assassinated Indira Gandhi, how did the country respond? It responded by turning off the Sikhs just because of the actions of two.

There were anti-Sikh riots that led to approximately 2800 deaths, and that, my friends, is not a small number. Then there were the Gujarat riots in 1969, where countless people lost lives once again. History repeats itself, and riots in Gujarat occurred once again in 2002. If I went on to name all the riots that took place with religion as its main motive, I think we’ll be here for a long time.

These riots don’t occur because religion is wrong; they occur due to a lack of education. Since people aren’t educated, they make their decisions based on the person they look up to. If the very leaders of our country put one religion on a pedestal while undermining another, what do you think the people will do? Communal violence in our country has almost become a game for people to play when their normal life stops offering them mirch masala.

We lack education, and so we follow anyone and everyone blindly. Tomorrow I could call the media and tell them that God came to me in a dream and made me his next prophet. Many people will make fun of me, and many will blindly follow me. Why? Because I mentioned God. I will dance in money while people praise and worship me.

I can’t just blame normal people for their decisions, though—our media over-hypes these cases to gain TRP. There is constant violence in Jammu and Kashmir, but a man just claimed to be Radha’s reincarnation; who do you think gets more preference?

Love your religion, follow it but don’t put religion above someone’s life.

If you don’t have access to education (you know, since our leaders have so many better things to do), at least listen to your conscience. Does it really stay silent when you take the life of another? 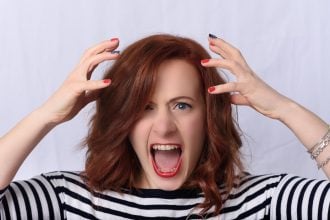