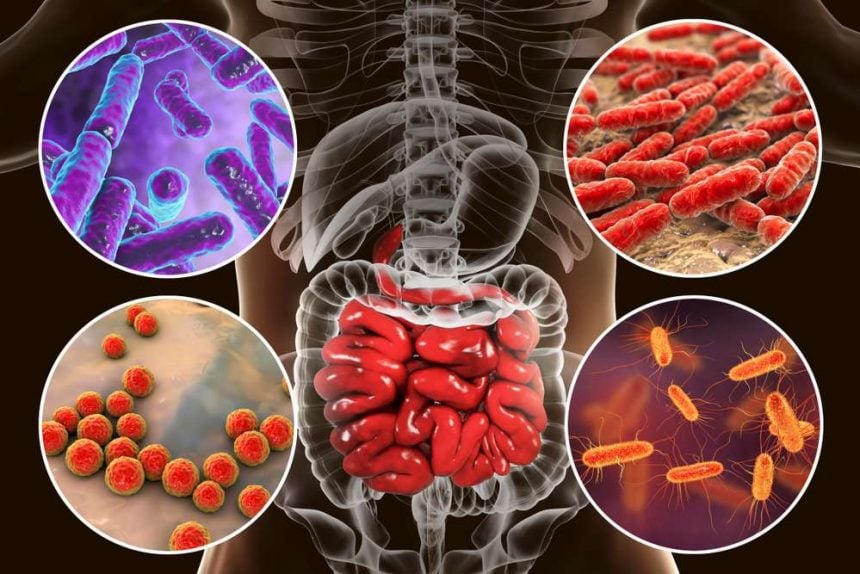 What is the best way to avoid E. coli? Do you want an answer to this question as well? If so, don’t worry because you’ve come to the right place. Here, you’ll learn everything you need about E. coli infections and everything else that goes with them.

Some of you may not be familiar with the term ‘E. coli.’ We’ll start with the introduction to help understand this concept.

E. coli is a bacteria spotted in warm-blooded organisms’ lower intestines. It is a gram-negative, rod-shaped anaerobic bacterium of the genus. It is mostly found in humans, but it can also be found in some animals’ guts.

E. coli is short for Escherichia coli, which can be found in environments, foods, humans, and animals. E. coli infection can occur in both healthy people and animals, according to my.clevelandclinic.org. Most of the time, it is not harmful, but sometimes it can be. If you want to know under what circumstances it is harmful, please read the entire article.

2. How does E. coli affect our Bodies?

Although it is a bacteria, it hurts the body by making you sick. The E. coli bacteria causes a Shiga toxin-producing infection that damages the small intestine, and some strains of E. coli cause diarrhea.

2.1. Which Strain of E. coli is Responsible for causing Diarrhea?

Not only is one strain responsible for causing diarrhea, but six different strains. Do you want to know how? The answer is given below:

‘Shiga toxin-producing Escherichia coli’ is abbreviated as STEC. It is a bacteria that is spread to others by eating infected food. The contaminated food poisons your body, resulting in diarrhea. Shiga toxin is also known as EHEC (enter hemorrhagic E. coli) and VTEC (vector-borne E. coli) (verocytotoxin-producing E. coli).

‘Enterotoxigenic Escherichia coli’ is a pathogenic variant of E. coli. Due to ingesting contaminated food or water, this strain is found in people, especially children and returning travelers.

‘Enteroaggregative Escherichia coli’ is a strain causing serious and chronic diarrhea in humans. It has an impact on both the developed and developing worlds. It causes urinary tract infections and diarrhea. If you have trouble pronouncing the name, you can call it ‘stacked brick.’

This infectious disease generally lasts 3–4 days, but if the condition is severe, it can last 14–15 days.

A person suffering from an ‘Enteroinvasive Escherichia coli’ infection develops a syndrome similar to that caused by Shigella bacteria. If someone has this, they will have a high fever and diarrhea.

An intestinal pathogen causes enteritis, and infection can lead to bacillary dysentery. An EIEC infection can be contracted by anyone who consumes untreated food, water, or leftover food from an ill person.

EPEC stands for ‘Enteropathogenic Escherichia coli,’ and it is most commonly found in children. It affects the body’s intestinal epithelial cells. People who suffer from it should not take it lightly because it can lead to serious health complications.

You’ve probably heard of the ‘infant mortality rate’ (IMR), which is the number of children who die before the age of one each year. IMR is increasing in developing countries as a result of this infection.

DAEC stands for ‘Diffusely adherent Escherichia coli,’ and it is also a diarrheagenic group of E. coli bacteria. This bacteria has an adherent pattern and is a pathogenic strain that causes extraintestinal infections.

3. Symptoms of an E. coli Infection

Diarrhea is another main symptom of E. coli and is caused due to the consumption of contaminated water or food. Diarrhea affects an individual’s physical and mental health. It can cause anxiety and depression in any human being.

The virus or bacteria that infects our bowels is the primary cause of diarrhea. That is why it is also known as the ‘intestinal flu.’ E. coli causes bloody diarrhea because it produces Shiga toxin, a powerful toxin that damages the lining of the small intestine and causes internal bleeding or bloody diarrhea.

Abdominal cramps are one of the symptoms of E. coli bacteria. The abdominal cramps result from high stomach acid levels affecting their function in the body. These stomach cramps with E. coli last for 5–10 days. Antibiotics will not help if you have E. coli stomach cramps. So as soon as you see a doctor, it will be better.

Food poisoning takes place due to eating contaminated food or water. In cases of vomiting, first, you need to determine which strain of E. coli infection is taking place in your body, and then you need to consume a lot of liquids to stay hydrated. This symptom will last for a week.

Suppose food poisoning is associated with E. coli. In that case, there is a possibility that you may get pneumonia and urinary tract infections from many different kinds of bacteria. The risks are higher in this situation because all the bacteria attack simultaneously in the body.

It is found in adults and children and is one of the necessary factors in Escherichia coli. Children will experience acute kidney failure, whereas adults are at high risk because it may be life-threatening.

In kidney failure, the red blood cells in a person’s body get destroyed. In E. coli, the bacteria first enter the urethra, cause urinary tract infections, travel through the bladder, and finally enter the kidney.

Escherichia coli’s most significant complication is seizures. According to pritzkerlaw.com, seizures can happen to an individual at any time, even after recovery. But still, it can be controlled easily, except for a child suffering from HUS (Hemolytic Uremic Syndrome).

In HUS, a child goes through “status epilepticus,” a prolonged seizure in which the child cannot regain consciousness.

4. What is the best way to avoid E. coli Infection?

Following are the ways you must follow while suffering from E. coli bacteria.

E. coli infections can also spread from person to person and are found in humans and animals. You should be cautious when purchasing raw meat and keep a separate cutting board. So that bacteria do not spread to other items.

Raw milk means unpasteurized milk that hasn’t been boiled to kill bacteria. So, there is a high chance of an E. coli infection developing in milk as it directly comes from the cow’s udder or milking equipment.

Untreated milk contains other germs and bacteria in addition to E. coli. Consume only pasteurized milk if you want to avoid serious health problems.

Wash fruits and vegetables thoroughly before eating or preparing them, as E. coli infections can spread from person to person. There is a chance that the manure of nearby animals will mix with the water during the water supply process. So, be cautious when purchasing and washing these items.

Water that has not been filtered should never be consumed because it harms the body. Consuming polluted water can have serious health consequences, including an E. coli infection. We occasionally swallow water from swimming pools containing E. coli and other infectious diseases. So, you must be extremely cautious when dealing with E. coli disease control.

E. coli infections are found in humans and animals with weakened immune systems. We, humans, love animals, and you’ve probably been to a zoo to see them, but did you know that places like pet zoos and animal exhibits can also cause E. coli infections?

To avoid E. coli, wash your hands thoroughly with water, soap, or handwash. If handwashing is not available, you can use hand sanitizer.

Juices such as unpasteurized apple cider and other untreated drinks, like unpasteurized milk, should be avoided because they contain bacteria. It is necessary to avoid these drinks to control the disease.

Cleanliness is critical in any disease, especially those caused by E. coli bacteria. Always wash your hands before and after touching food, using the restroom or toilet, or coming into contact with another person or animal. Proper hygiene maintenance is required to combat E. coli.

You must see a doctor for Escherichia coli infection treatment, but your doctor will also be able to determine which type of E. coli bacteria has infected your body. To begin, your doctor will send a sample of your stool to a lab to diagnose your infection. Then he’ll treat you according to the reports.

The test results determine the medicines used to treat the infection, indicating your strain. Doctors do not usually recommend antibiotics and medications, but the doctor will take appropriate action if your condition is severe.

To get rid of E. coli, you must get as much rest as possible. You must be relaxed to maintain your mental health and avoid feeling dizzy or tired. Rest is also required to overcome respiratory illnesses.

Another important consideration is the liquids you must consume while suffering from E. coli. Fluids or liquids should be consumed to stay hydrated; dehydration will make you feel energetic.

5.2. Why are Anti-diarrheal Medications taken for Escherichia coli Infections?

Because medicines contain chemicals, they cause your digestive tract to slow down. The risk factors are higher due to the chemicals, and in E. coli, the Shiga toxin in the body also develops, so taking medicines will react with the toxins. As a result, medications or antibiotics will be ineffective.

Most E. coli infections get managed independently if they are mild and not too serious. But if the infection is severe, the patient will be hospitalized because it is life-threatening and can result in kidney failure.

6. Is E. coli Harmful during Pregnancy?

A pregnant woman should be more cautious in all aspects, especially with E. coli, because this infection can result in preterm delivery of the baby around 35-37 weeks. Because of premature birth, the baby may contract E. coli bacteria and other infectious diseases.

Miscarriages are also possible during pregnancy. UTI (urinary tract infection) is common and can interfere with fertilization. Complications can arise both before and after a woman’s pregnancy. As a result, E. coli is a very serious infection that must be treated immediately during pregnancy.

6.1. Which Age Group is Most Likely affected by E. coli?

According to mayoclinic.org, adults over 60 and children aged five and under have a higher risk of contracting E. coli than other age groups. Because young children and the elderly have weakened immune systems, any bacteria or infection can easily infect them.

The conclusion is that E. coli is a serious infection that should not be ignored because it can be fatal. However, if you consult a doctor early on, there is no risk. The treatment is also simple because you can try it at home. To overcome an E. coli infection, follow the steps mentioned in the article.