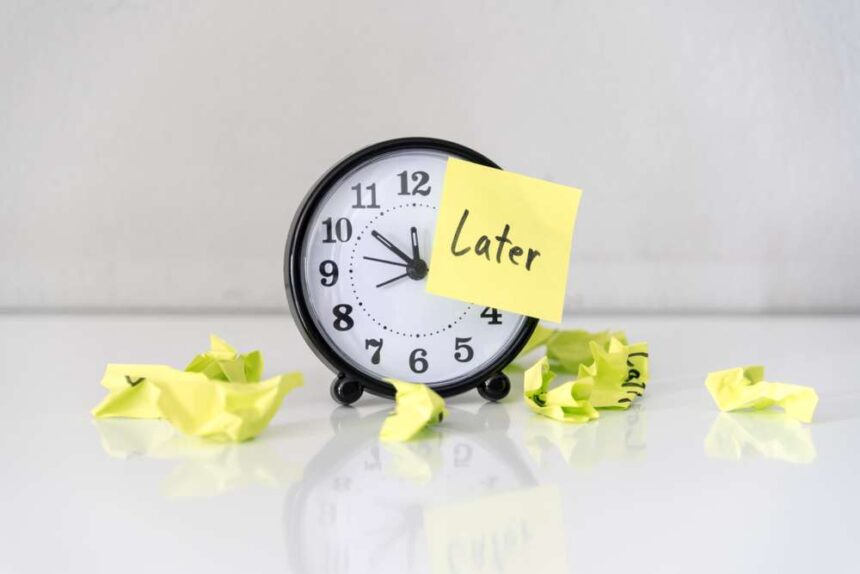 Like many more obscure disorders, chronic procrastination usually never gets diagnosed. Instead, it is often blown off as excessive laziness, concentration issues, and delaying tasks. Even our educational professionals are rarely trained to handle kids with this disorder or understand their problems.

It was much as the case with dyslexia and other learning disorders even a few years ago. Chronic procrastination is often seen as a shortcoming of the sufferer himself rather than a treatable psychological illness.

However, despite the immense social pressure to ‘get over themselves and get the job done, those suffering from the symptoms of chronic procrastination’ might find it incredibly difficult to do so, often blaming themselves for this inability because of a lack of information about the disorder.

This lack of information and social pressure might lead to further feelings of depression, inadequacy, and self-loathing. It might sometimes even become the cause of self-harm when the patient is overwhelmed by social pressures on the one hand and their psychological disabilities on the other.

We need to know the symptoms of this corrosive disorder to help ourselves and others – if we ever meet someone suffering from any of these symptoms.

One of the main signs of Chronic Procrastination is feelings of self-doubt and indecisiveness. You might suffer from indecisiveness about the nature of the task or even whether you want to do the job.

Before beginning a task, you might feel overwhelmed by a lack of confidence to finish the task, which leads you to procrastinate, tell yourself that you will reach a decision tomorrow, and feel more confident after a good night’s rest.

But the thing is, the more you postpone the task, the more these feelings of failure and inadequacy will keep increasing until they become so pervasive that you find yourself completely incapable of completing the task that you had initially set out to do.

The only way to break it is to grit your teeth, close your eyes, take a deep breath, and plunge into the unknown. You might still fail, but you’d fail to know that you had tried!

People suffering from Chronic Procrastination Disorder often do this to keep reminding themselves of their to-do list and pushing themselves to complete the things they had started. It is a good tactic and one with a good chance of success.

List-making might be helpful to anyone, regardless of their psychological state. Seeing a list of everything you need to accomplish by the end of the day constantly in front of you might spur you into accomplishing at least some of those tasks in reality. Also, it is an excellent way to motivate yourself while keeping track of your chores at the same time.

However, this can sometimes backfire. If the tasks on the list become overwhelming or pile up over time into something that the patient finds suffocating or excessive, this will only cause them to shut down completely. Because they know they cannot accomplish everything on the list, they will refuse to do anything; this might become counterproductive and result in the exact opposite of its intended effect.

So, one must always be careful to manage the list carefully and delete tasks that have either been already completed or prove too burdensome to bother with.

Many people with chronic procrastination disorders do not deal too well with options. If you give them multiple tasks, they will become so paralyzed with indecisiveness over which task to tackle that they will finally do nothing; this might also happen if, while moving through a list of tasks, they suddenly come across one that, for some reason, cannot be completed.

Because they had been unable to finish that one task, they might abruptly shut down and waste time futilely trying to finish it, while all the other jobs remain unattended.

Someone who appears to be distracted all of the time is a good indication of someone with chronic procrastination. These are the people who are constantly doing small tasks throughout the day but never seem to be able to complete their actual work on time.

They will come up with reasons for not doing what they need to accomplish but will find distractions wherever they go. As a result of this tendency, they waste too much time during the day trying to accomplish these minor tasks rather than completing the work in front of them. They can get more done each day if they decrease the number of times, they can become sidetracked.

Procrastinators dread few things as much as they dread deadlines! In a study titled ‘Procrastination, Deadlines, and Performance,’ what was discovered was when a group of people diagnosed with chronic procrastination was given a set of math problems to solve under the guise of a practice session with no natural consequence, the majority of them completed the problems on time.

However, most did not finish the set tasks when they were asked to finish the problems within a given period to prepare for a quiz; this demonstrates that their failure to complete the identical assignment a second time had nothing to do with a lack of aptitude, but rather with an underlying inability to meet deadlines – perhaps even dread of them.

Nearly 20-25% of the human population suffers from procrastinating tendencies to one extent or the other. In some, the symptoms are more severe than in others – to the extent that they might even become debilitating and interfere with their ability to live a healthy and fruitful life.

Without proper help, guidance, and compassion, such people might slowly waste away, stuck in their hell: a self-perpetuating circle of inaction, failure, self-loathing, and further inaction; this might give rise to many other mental disorders that had not previously existed.

Therefore, we must treat such people not as social pariahs but with the same compassion and understanding that we would extend to anyone suffering from a similar incapacitating physical illness that rendered them incapable of performing tasks with the same efficiency and speed as their peers. A little bit of love and compassion can solve most of the world’s problems!