Well, you all must have heard about the game ‘Derby.’ But what is this ‘Roller Derby’? Worry not; we have the answer ready for you.

So in this article, you are going to know every exciting detail about Roller Derby.  Roller derby is a roller-skating contact sport where two teams on roller skates race around a circular track. The Roller derby game is called a match or a game. The team which scores more points at the end wins.

This sport is prevalent in New Zealand, Australia, and Canada. It is more popular in New Zealand than in any other nation. It was even considered as a roller sport for the 2020 Summer Olympics.

Roller Derby has its own rich and long history. Leo Seltzer, an event promoter, and Damon Runyon are credited with bringing up this game’s competitive form.

This game had its origin from the banked-track roller-skating marathons in the 1930s. 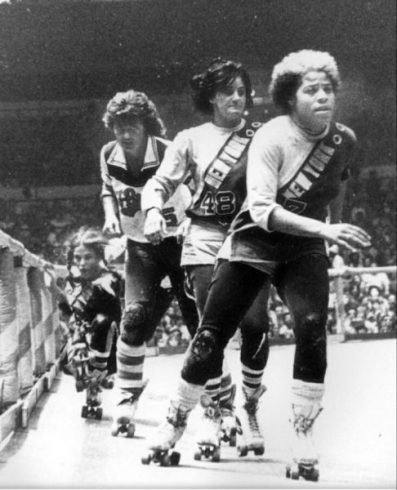 Earlier, it was a form of sports entertainment. The 21st-century revival led by women created more emphasis on athleticism. In the 1930s era, it was rare for women to be involved in any sport, but Roller derby from the beginning gave both men and women equal opportunity.

Roller Derby And Its Origins…

As told in the stories, Leo Seltzer was looking for something more exciting to attract huge crowds during the Depression-era.

One day he read a magazine that said more than 90% of the Americans had roller-skated at some point in their lives. So he took upon the idea and gave Roller derby an exciting new competitive face.

Around twenty thousand people came to watch the First Transcontinental game between two teams, which consisted of both men and women. The team which completed a distance of 2700 miles from coast to coast was declared the winner.

In 1937, Leo Seltzer, together with Damon Runyon, introduced the full contact-thrills and shaped Roller derby’s actual structure as we see today.

By 1949, this game became very famous; it became a national sensation with the players becoming well-renowned names. But by 1953, the craze faded as fast as it made its way into people. The enthusiasm people had for Roller derby started dying.

In 1959, Leo Seltzer’s son took up the responsibility to light up the dying flames. He started videotaping the games and licensing them to local TV stations.

In 1965, after an absence of 13 years, the game came back to life when 13,421 viewers gathered at the Madison Square Garden to watch the championship. And since then, the fans are showering endless love for the game.

The Basic Set of Rules for Roller Derby…

Roller Derby is played in two halves, each of 30 minutes. Two teams, each having up to 15 players, field up to five members for episodes called “jams.”

Each Jam lasts for 2 minutes unless called off in between. Out of the five members, one is the scoring player,” the Jammer,” the other four members are “blockers.” One of the blockers can be designated as ” the Pivot,” which can act as the Jammer in between the game. Jammers can only score the points.

In each Jam, the teams skate on the circular track in a counter-clockwise direction. The jammer scores one point bypassing any opposing blocker by breaking through the pack and completing one lap to start another. The jammer scores four points if he\she passes the entire pack. This is commonly called a “grand slam.”

According to strategy, the Blockers of the team block the Jammer of another team from scoring points by using body contact and changing positions.

Things Needed to Get Ready for Playing Roller Derby

A Roller Derby player is required to put on many things before getting ready for the game. These include the four Wheeler skates, protective equipment, which includes a helmet, elbow pads, wrist pads, knee pads, mouth guard, and wrist guard. Inline skates are forbidden for the players under the current set of rules for Roller Derby.

There are a few gender-specific pieces of equipment, too, like a hard-case sports bra for female players and protective cups for males.

The Jammers wear star covered helmets; the Pivots wear stripped helmets, the Referees wear black and white striped helmets, while the Blockers don’t have a particular symbol on their helmets.

WFTDA (Women’s Flat Track Derby Association)is regulated by three to seven skating referees. Many non-skating officials(SFOTherehere are four refer inside the trackers, and three additional referees skate outside the track. They call penalties, give award points, and ensure a safe gameplay.

Nicole Williams, also popular as Bonnie Thunders, is one of the most famous Jammers. She is called the Barry Bonds of Roller Derby. She was a top skate on New York College’s synchronized skating team: the Syracuse Orange Experience. 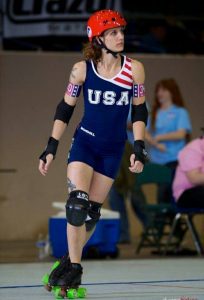 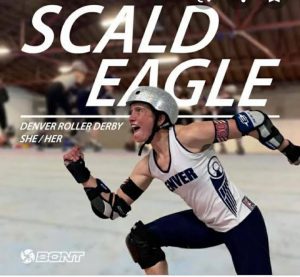 Ronnie Smith Robinson was an American Derby player and coach. He was the son of a great boxer Sugar Ray Robinson. He was the third African-American to play Roller Derby. He was included in the Roller Derby Hall of Fame in the year 2004. 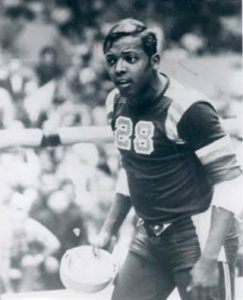 Stefanie Mainey, the blocker from London Roller Girls, was the Captain of team England for the 2011 World cup. 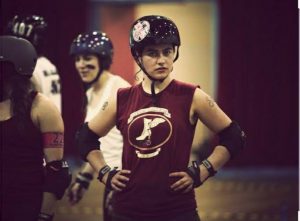 There are many more outstanding players. We named just a few because we, for sure, cannot mention all of them. If you want to know about some of the more best Roller derby players, Click here.

WFTDA is an international governing body and membership organization of women’s flat track derby sport. This organization was founded in 2004. Currently, there are 451 team’s from over thirty countries from six continents under this organization. 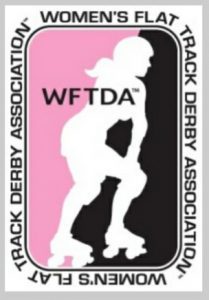 WFTDA championship is held every year, and an annual ranking list is released at the end of the year. As of now, the Gotham Girls Roller Derby team has got the most number of titles that are five in number.

This was all you needed to know about the WFTDA organization briefly, as you cannot forget when you are talking about Roller Derby.

Across the period, Roller Derby has evolved from a professional game to a sport loved at inspired by the community. It is an unofficial game that turned into official gameplay.

During the 2003 “flat track revival,” to attract people’s attention, the skaters started giving themselves punny nicknames like “scald eagle,” “Lady trample,”  and many more.

You’ll be surprised to know that doing makeup using glitters and a variety of different colors is done by the skaters either to develop a signature look or just for fun to entertain the spectators. People are attracted to such shiny stuff, and also, it brings out the personality of the player that we can judge by the look. You can figure out whether the player has an aggressive nature or a defensive one. 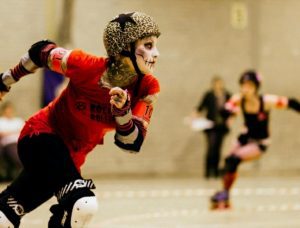 The skaters also use eye-catchy uniforms during gameplay, which includes spandex clothing and bandanas. It is entertaining for the spectators to watch them bump and fall on each other while preventing the Jammer from scoring. 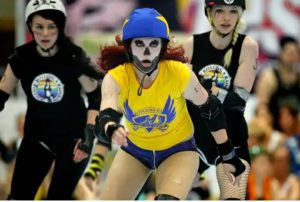 What’s most interesting is that it brings up a feeling of team spirit and togetherness. It is a true team sport. A player alone in the field is completely useless. They have to work as a team if they want to win.

If you ever watch a derby match, you’ll be surprised to see that the players have to know each other in a way that even the facial expressions should be enough to convey a message. They shout at each other, use coded words, and stick together as a team to win against the opposite team.

Watch this video. You’ll get amazed at how fascinating and attractive this game is.

Now here is an interesting and hilarious fact about Roller Derby. In the beginning, when the skaters start their training, the coach orders them to fall altogether, and then they have to get up without using their hands.

It is really difficult to get up because they are on skates. It doesn’t matter how much time they take, but they have to do it. Once all of them are up, they are asked to do it again.

This exercise runs for about twenty minutes. It is tough and requires a lot of strength, but it is amusing if someone watches. Even the players enjoy this exercise.

Use of their Body Parts to Play!

You’ll be surprised if you have a look at a Roller Derby match. Even if it looks like a crowd while they are playing as they are bumping and falling on each other, the players are not allowed to use their hands and legs to kick or punch another player. They cannot hit another player below the knee line. Please have a look at the video to understand how they play.

They can only use their shoulders, rib cage, hips, and thighs for hitting, pushing, and resisting the attack of another player. It is wonderful to see how much you achieve by only using a few body parts.

There should be no kicking, punching, elbow nudging, and even no contact with another player’s helmet.

Roller Derby is Not a Girl Sport…

Earlier, people used to refer to Roller Derby as a girl sport because it was new for viewers to watch girls involved in sports-related activities. Even now, when Roller Derby is an international sport, most teams are all-female teams.

As we said earlier, this game gave equal opportunities to both male and female. It always has. But due to the 1930 revival in which women participated actively, it has grown more among the feminine side.

But in recent years, there is a growing number of male, unisex, and junior teams. Many renowned Roller Derby players are not from women’s teams like Ronnie Smith Robinson.

Germany holds two championships, namely November Pain and The Incredible Kick-Ass Cup, at national levels. Brasilierão de Roller Derby Championships are held in Brazil every year. We also have the Roller Derby World cup, which started recently in the year 2016.

To name, these are a few famous ones. Many national level championships and member leagues also take place every year for this wonderful game.

To know about the 10 most popular sports in the world Click here.

Rose City Rollers is the best team according to the WFTDA rankings. They are outstanding. They have succeeded in maintaining a consistent position despite the competition from tough competitors. The second is the Victorian Roller Derby league, again a splendid team.

Then we have the Denver Roller Team and Arch Rival Team with the third-highest and fourth-highest ranking. If you want to know more about current rankings, tournaments, and bouts, click here.

So in this article, we covered up everything about this interesting and enthusiastic game called Roller Derby. I guess now we know what it is all about. We told you we would have the answer ready. Hope you enjoy reading the article and gained some interesting knowledge about this wonderful sport.