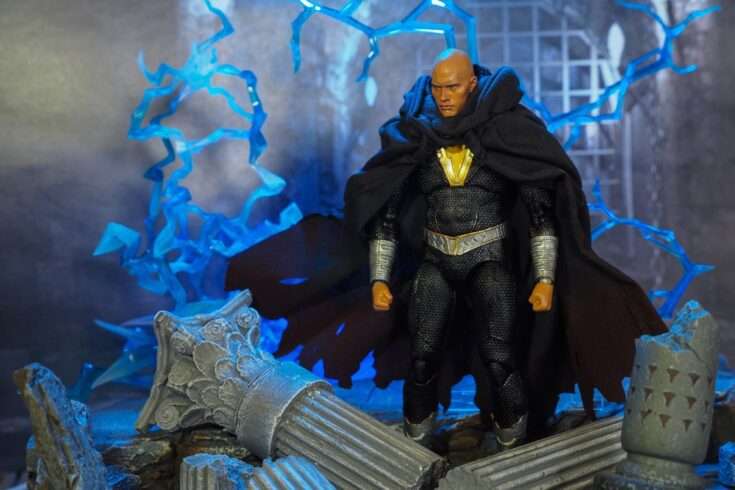 Born in Egypt, the young prince Teth-Adam was bestowed with six Egyptian gods’ power by a wizard Shazam. However, things turned terrible as Blaze (the daughter of Shazam) corrupted the Mighty Adam making the wizard take back his powers, which he later grants to Captain Marvel. He is one of the greatest villains in comic history.

When the family of Adam was killed, he committed genocide over the nation of Baliya. After starting a war against the world’s heroes, he defeated every superhero who dared to cross his path. Sometimes presented as an anti-hero, he is the primary antagonist of Shazam (Captain Marvel).

Doomsday is a genetically engineered Kryptonian monster. Ruthless and mindless in nature, he is the nearly unstoppable supervillain in DC Universe. Being of krypton origin, his powers equally match up with thereupon of Superman, making him the only one in the comic history to beat him to his death. He is one of the greatest villains in comic history.

He can adapt himself to any condition and attack that harms him. Moreover, the protruding bones of his body can pierce the Kryptonian skin. The capabilities to regenerate and resurrect himself from death makes him an even tougher one to hold off.

Loki, the Norse god of mischief, is a master of sorcery and is one of the most famous supervillains in Marvel. A free birth, a frost giant raised in Asgard, allows him to acquire some Asgardian attributes of super strength and durability.

Aggrieved from his disregard for Thor, he always desires to kill him, meanwhile attempting every possible way to dominate the Asgard. He is the reason behind the Ragnarök event and is the threat for which the Avengers teamed up for the first time and, from that point of time, has been recurring trouble for the Earth’s mightiest heroes. He is one of the greatest villains in comic history.

Belonging to a race of alien symbiotes, Venom offers excellent powers to its host in return for feeding on their emotions by making a physical and mental bond with them. The symbiote first bonded with Spiderman, who realized that the parasite was eventually taking control over him. He then opted to be separated from it with the assistance of Reed Richards. He is one of the greatest villains in comic history.

On bonding with Eddie Brock, his hatred against Spider-man corrupts the symbiote, making it more violent and bloodthirsty. It always seeks a more robust host and abandons the previous owner if proven unworthy of it. The Venom inherited Spiderman’s fast reflexes’ abilities, wall-crawling, and spider-sense that gave Eddie (as Venom) an edge over Spiderman. Having weakness against sound and flames is the sort of thing you never want to mess with.

Also known as the Devourer of planets, Galactus possesses enormous comic power and is a somewhat god-like persona in Marvel Universe. Whatever the other villain’s dream of, conquering or destroying, is merely a meal for Galactus; he eats the planet to rejuvenate his powers. He absorbs the planet’s life force and maintains the cosmic balance of the universe.

Although Galactus has no rivalry with any hero, Fantastic 4, with the aid of Silver Surfer, confronted him with saving the Earth from being consumed by him. He also raged war with Asgard to acquire the Galactus Seed to satisfy his cosmic hunger but failed.

He is one of the greatest villains in comic history. Apart from his telekinetic and telepathic powers, he can also transform, restructure, and create inter-dimensional portals. With ultimate strength, his teleportation and size alteration powers also contribute to his terrifying image.

The ruler of Latveria, Victor Von Doom, is credited to be the most intelligent man in the marvel universe. Doom is hell-bent on conquering the entire world and rebuilding it in his image, believing that the world would be better under his rule. As a Latverian ruler, his diplomatic immunity can’t let you hold him off even if you defeat him.

Doom is equipped with highly sturdy and advanced armor making him invulnerable. He is conjointly the designer of specialized robots known as the Doombots. Being an egotist, his ingenuity and powers are overshadowed by the strong desire to defeat Reed Richards. He is one of the greatest villains in comic history.

The mutant god, ‘En Sabah Nur,’ is the first mutant ever born on Earth, and since that time, he is causing trouble to anyone who dares to cross his way (ask Kang the Conqueror).

During his time on a Celestial ship, he became immortal, coming in contact with a techno-organic virus he only believes in the survival of the fittest, so he doesn’t care if you are a human or a mutant; if you are weak, your better dead. He is one of the greatest villains in comic history.

In the ‘Age of Apocalypse,’ he raged war with X-Men to conquer the world; by doing so, he killed millions of humans in a campaign called ‘culling.’ His most significant fear is that he can create mutants out of normal humans (ask Mr. Sinister) and turn a mutant into one of his servants (ask Angel or Gambit).

One of the most potent DC Universe characters, Darkseid, is an Apokolips’ evil ruler, probably the greatest threat to the Justice League. His goal is to destroy every free will from the universe to complete his ‘Anti-Life Equation, a formula that would combine all minds in the universe into one, thus granting Darkseid the sole superiority over the entire universe.

To protect the Earth from Darkseid invasion, Justice League came into existence. Darkseid is the one whose ambition extends beyond simply conquering the world; he not only wants to rule humanity but also wants to control every living entity in the universe.

In a fierce fight with Darkseid and his army, Cyborg lost half of his body, and the Justice League suffered a lot of damage, but somehow, they managed to thwart his evil plans. He is one of the greatest villains in comic history.

Obsessed and in love with the idea of death, this mad titan massacred his entire race, making him the sole survivor of his race. He is probably a prime threat to Marvel’s Mightiest Heroes since he decided to destroy Earth’s life. He is one of the greatest villains in comic history.

His hunger for power drives him into a quest to possess the Infinity Gauntlet, which has enough power to distort space, time, and reality. He commands an army named Chitauri and has the foremost motive to court death by wiping out every aspect of life from the universe.

A deck of cards is incomplete without a Joker. Thus, how could we conclude this list without him? Joker, the clown prince of crime, is the arch-enemy of Batman and is no doubt the most famous villain ever created.

He is a genius-level intellect, a master-level strategist, and above all, a maniac. He kills people for fun in the utmost brutal way possible, as he beats Jason Todd (the second Robin) to his death with a crowbar. He is one of the greatest villains in comic history.

Murdered Sarah Essen (James Gordon’s wife) and shot Barbara Gordon (aka Batgirl) to her paralysis. With no plan, world domination, world destruction, and grudge, his only aim is to bring anarchy. For all such reasons, Joker is feared by heroes and villains alike since no force affects the clown. Being the counterpart of Batman in every aspect, Joker is indisputably the worst-case scenario of an evil one can dream of.