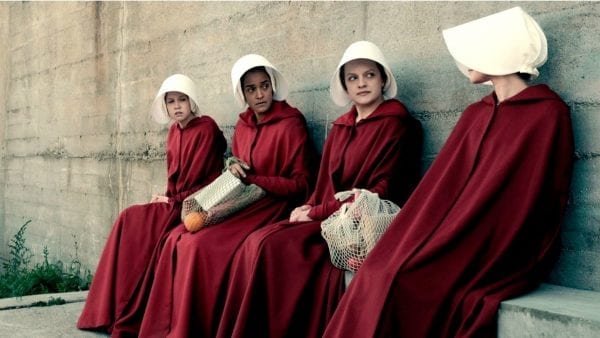 Recently, a tv-series with an underdog cast took over Golden Globes 2018. It was the based on the Handmaid’s Tale book by Margaret Atwood, the tv-series portrays the life of June “Offred” who lives in a future dystopian world of  Gilead which is none other than the US itself but after an imaginary second civil war.

Handmaid’s Tale following the book follows the journey of June and her ordeal in the repressive tortured world of Gilead where fertile women who can bear babies are secluded from the rest of the world by turning them into forced Handmaids and giving birth to children of the Generals or Commanders who have come to power in the recent coup and whose wives have been rendered infertile due to worldwide infertility epidemic.

In the Handmaid’s Tale, the women who have been turned into handmaids are forcefully made to have sexual relations and bear children of the ruling class and follow the strict rules imposed upon them, for if they don’t abide by those rules they can face incineration.

The various depictions of dystopia as portrayed by the tv-series seeks to bring us an image of destruction that is not so far off in the future for humanity with rising dissent and zero tolerance and ambiguity among nations and people.

In the Handmaid’s Tale, on one side are the opposers of Gilead with people like June and all rest of the Handmaids who are suffering under the tyrannical and patriarchal rule of the Commanders in charge of the country. On the other hand are the families and supporters of Gilead who find the dystopian way of life the ideal condition for good and honest living.

The one character in the Handmaid’s Tale who portrays the latter emotion is the wife of the Commander June is made to serve: Serena Joy. The director has taken a lot of care not to portray Serena as a cold-hearted person who lacks empathy or emotion, instead, in the Handmaid’s Tale, she is portrayed as the anti-hero who seeks to maintain her own in a male-dominated society. Her cruelty does not stem from within but is a mask to hide her deep pain and grief at her husband’s indifference to her existence.

The one issue which is recurrent throughout the entirety of the tv series is the oppression of women and other minority groups in the male-dominated Gilead where women are relegated to the position of the silent wife and the abused handmaid. The tv series seeks to ask questions and raise knowledge about women sexuality in a repressed society and how one seeks to deal with it when faced with the threat of immediate execution.

It was one among the initial shows of Hulu which took its time to come into focus. Handmaid’s Tale first aired on Hulu on 26th April 2017 with three initial episodes and subsequent seven episodes aired on Wednesdays on a weekly basis. The show due to its very successful first season, was renewed for a second season on April 25th, 2018.

Handmaid’s Tale will be aired for a few more seasons following its wide popularity and wonderful run at the golden globes 2019.