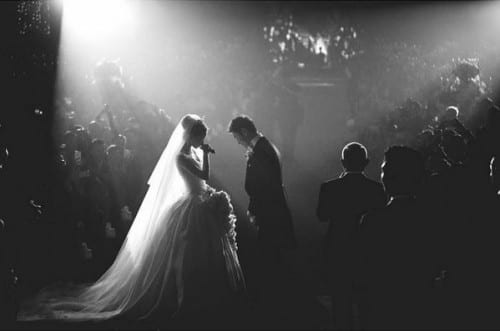 Growing up with Disney princesses with their Prince Charmings and elegant ball gowns and happy-ever-afters, we’ve all thought of (and perhaps even wanted at some point or the other, okay not perhaps, DEFINITELY WANTED) a Big Fat (filled with whatever nationality you may have) wedding. Especially for the women out there, the idea of our own “big day” always seemed like an appealing idea when we were little and waiting for our own versions of Mr. Perfect. And seeing celebrities like Kim Kardashian West having lavish million-dollar weddings makes us feel like our own princess wedding may be possible someday! But guess what, there’s another “princess” in the news.

Hong-Kong-based model, actress, and singer Angela Yeung, a.k.a Angelababy (Funny right? She says she just clubbed her first name Angela and her nickname baby to come up with that name!) and the new Kim Kardashian of China, had her own version of a fairytale wedding. The wedding ceremony was estimated to cost $31 million, approximately thrice the amount spent on Kardashian’s nuptials, and just a little shy of William and Kate’s royal wedding that cost $34 million. (Woah! Our Chinese actress sure took Keeping up with the Kardashians a bit too far).

The wedding deets are below: The ceremony was held at the Shanghai Exhibition Centre, which was filled with thousands and thousands of roses that had the venue had a beautiful rosy fragrance. Screens in and around the venue displayed the couple from their pre-wedding photoshoot, which was shot in Paris, in front of the Eiffel Tower, with Angela wearing Eli Saab couture gowns! *long sigh and hand on fluttering heart* But that is not all. To top all of that, there was a holographic castle at the wedding (Taking the princess theme literally now, are we?), expensive gift bags, stained-glass window lights, and flowers everywhere.

Moving on from the visual aspect down to the nitty-gritty, the bride’s ring, designed by Parisian designer Chaumet, features a five-carat pear-shaped diamond with another half a carat of diamonds around it. *bling* The bride’s wedding gown (which was a piece of art in itself) and was custom-made by Christian Dior and took FIVE MONTHS to design and turn into a reality! According to Forbes, the gown had “115 feet of ivory satin organza, and 165 feet of tulle…a 10-foot-long train, and nearly 100 hand-cut rose bouquets made of Chantilly lace.” Truly, the dress was amazing. Adding to ALL of that was the enormous cake! It was a ten-foot-tall masterpiece designed to look like a carousel (Yes, it’s the thing with the horse chariots going round and round. Awesome, right?), which also took a MONTH to assemble (Wow).

There were 2,000 guests at the wedding, including some of East Asia’s biggest celebrities. Two thousand people got to witness the miracle-wedding! But can you really imagine spending $31 million on getting married?

Frankly, I can’t. For me, just the love of my life, a bouquet, a wedding dress, some diamonds, family, and friends would suffice. Oh, and John Mayer. John Mayer singing in the background is very important. (Message to girlfriends: Tell my future hubby that! )

Jokes aside, let’s hope having over-the-top wedding ceremonies doesn’t turn into a competition.