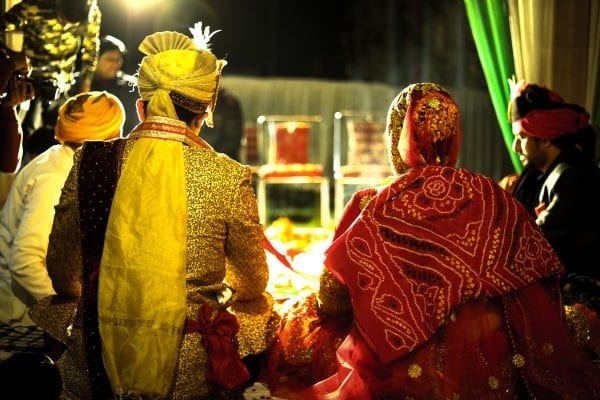 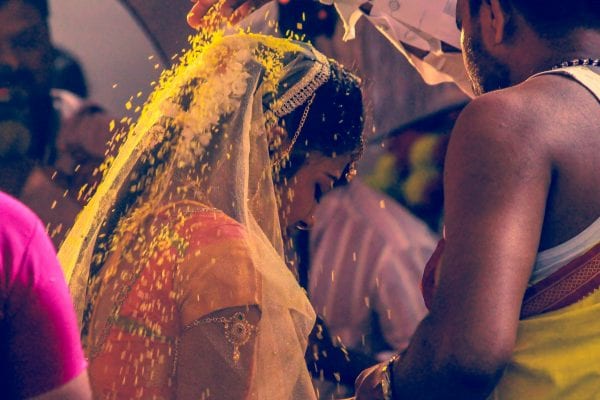 The saat phere (or Shaptapadi ritual) is well-known to anyone who has seen an Indian wedding. The bride and the groom circumambulate around the sacred fire (agni) seven times. It is said that Agni, the Vedic god of fire, resides in the sacred fire. Taking Lord Agni as the witness, the bride and groom take certain vows surrounding their married life. Each time the couple takes one round (phera) of the sacred fire, the priest utters a particular vow, which the groom and bride repeat accordingly. In total, there are seven vows that are taken by the marrying couple. The Indian wedding seven vows are crucial to any Indian marriage.
While this ritual is extremely well-known among all Indians, what is often overlooked are the vows in itself. Few people know the real meaning of the seven vows that they take during their wedding. So, instead of uttering the vows without knowing their meanings, let’s look at dive into what these Indian wedding seven vows mean.
Note: Each of these vows has two parts. The first part of the vow is repeated by the groom, and in response, the second part is repeated by the bride.

Groom: “Om esha ekapadi bhava iti prathaman”
Bride: “Dhanam dhanyam pade vadet”
The groom promises that he will provide welfare and happiness to his bride and their children. He tells the bride that she will provide him with food and help whenever necessary. In return, the bride promises that she will be responsible for the household duties. She promises to take care of the family and finances and shoulder all responsibilities with the groom.
The significance of the first of the Indian wedding seven vows is the promise of fulfillment of the social duties of both the bride and the groom. They assume the gender roles of each of them through this vow. It places significance on social duties for a successful marriage. 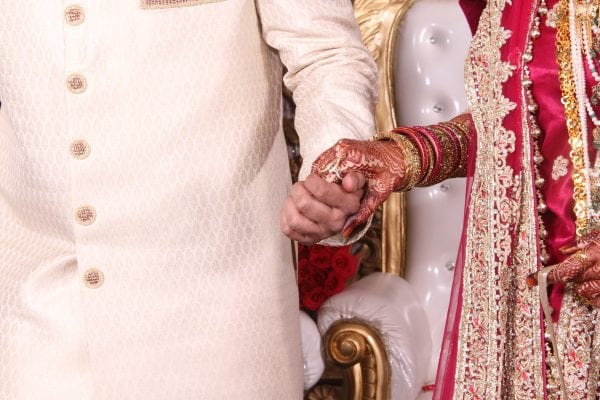 Groom: “Om oorje jara dastayaha”
Bride: “Kutumbum rakshayishyammi sa aravindharam”
The groom assures the bride that he will protect the household and the children with her help. In response to this, the bride promises her husband that she will stand by him no matter what the circumstances are.
The second of the Indian wedding seven vows is of significance as it shines a light on the fact that for a successful marriage, the couples need to stand by each other as one another’s strength in testing times. 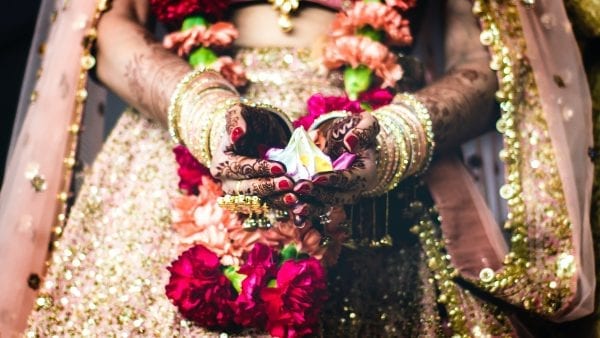 Groom: “Om rayas santu joradastayaha”
Bride: “Rava bhakti as vadedvachacha”
The groom promises to strive for a life full of wealth and prosperity for themselves and their children. He promises to ensure education and a long and healthy life for their children. In return, the bride assures her to-be husband of integrity on her part. She promises to love her husband throughout her life and put every other man in her life in a secondary position.
The third of the Indian wedding seven vows emphasizes on the material and spiritual safety that is essential to any marriage. No marriage can thrive unless the couple has complete faith in each other, both in terms of loyalty and physical protection. 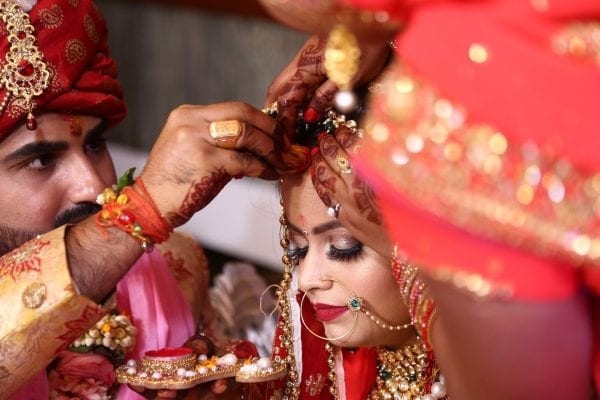 Groom: “Om mayo bhavyas jaradastaya ha”
Bride: “Lalayami cha pade vadet”
The groom tells her to-be wife that she has brought immense joy and happiness to his life and that she has completed him as a person. He prays that their children will be noble and obedient. In response, the bride promises her future husband that she will strive to please him in every way possible for her. She will fill his life with happiness and joy at all times.
The fourth of the Indian wedding seven vows focuses on the importance of happy family life. Without a happy family life, a marriage can never last. This vow ensures that both the wife and the husband give their all to please each other and keep everyone in the family, including their children, happy and joyous. 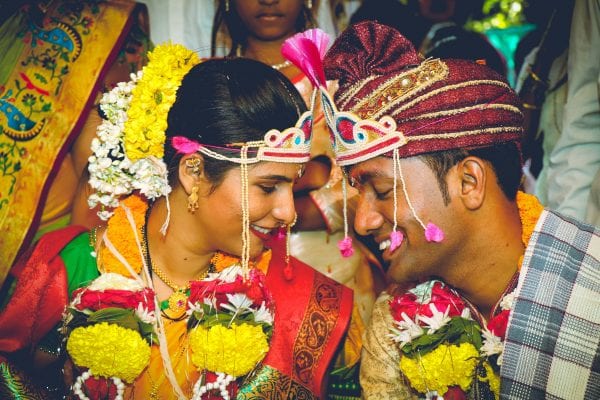 Groom: “Om prajabhyaha santu jaradastayaha”
Bride: “Arte arba sapade vadet”
The groom calls his bride, his best friend, and his biggest well-wisher. He says that she has brought supreme joy and happiness in his life. In reply, the bride promises his future-husband that she will share both his happiness and sorrows. She promises to respect him and love him for all eternity.
The fifth of the Indian wedding seven vows emphasizes on the importance of friendship and dependency in a marriage. Friendship is the key to an everlasting relationship. This vow fosters a sense of friendship and love among the couple, which is key to a successful marriage. 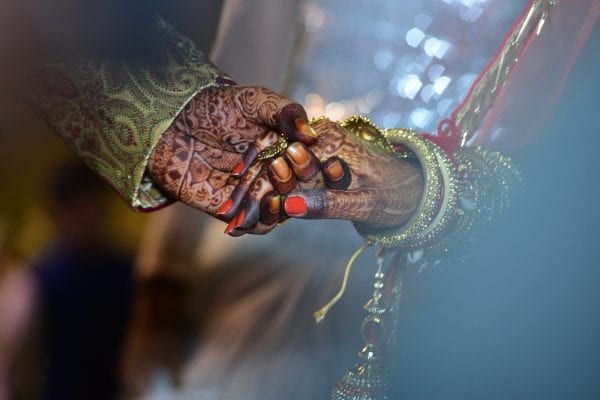 Groom: “Rutubhyah shat padi bhava”
Bride: “Yajna hom shashthe vacho vadet”
In this step, the groom does not make a promise. Rather, he asks his bride, with whom he has taken six pheras (rounds) already, whether she will fill his heart with happiness and joy for all eternity. To this question, the bride answers by promising that she will stand by her husband through both the good and bad times.
The sixth of the Indian wedding seven vows is important because it lets the couple promise to stand by one another in times of sickness and disease. Too often, people are scared of standing by their significant other during daunting times. However, once this vow is taken, the couple has to stand by one another during both rain and sunshine. Without this, marriage is simply impossible to last. 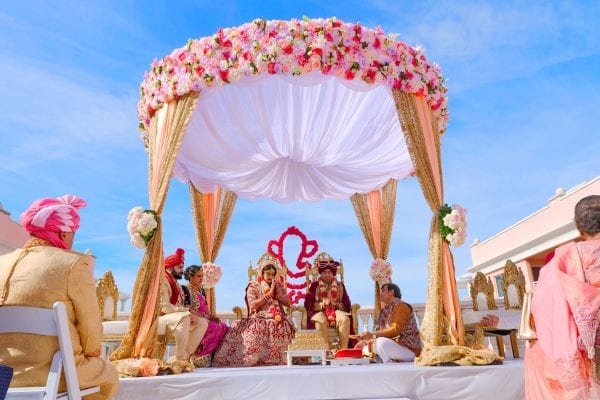 Groom: “Om sakhi jaradastayahga”
Bride: “Attramshe sakshino vadet pade”
The groom finally declares that he and the bride are, from this moment onwards, husband and wife, and bound for life and beyond. The bride, taking the Supreme God as the witness, declares herself the wife of her husband, and promises to love and cherish him for eternity.
The seventh of the Indian wedding seven vows is a mirror image of the “I do” that is seen in Christian marriages. It seals the marriage formally; it is a declaration of the acceptance of the bride and groom of their new married life. It resembles an oath that is taken for eternity by the new couple: one where they promise to share their lives with each other. 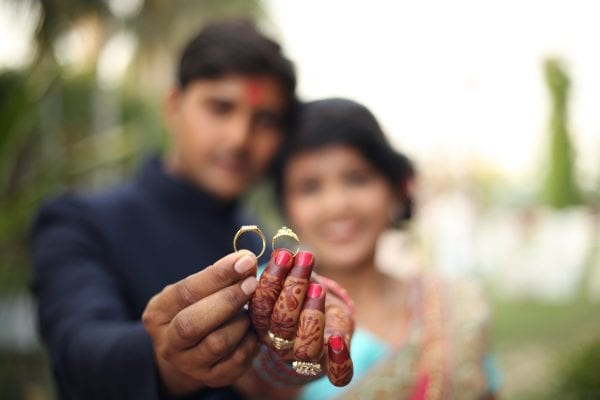 Indian Marriage: Why is it so Necessary In India?
Arranged Marriages: Exciting Pros and Cons of It