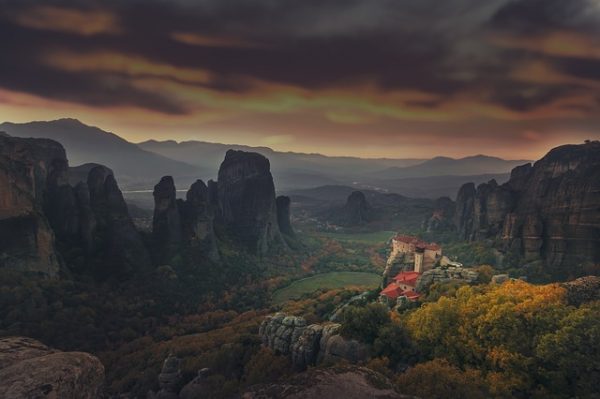 The Meteora monasteries have found their home in the country of Greece. Greece, as we know it, is a country of unmatchable beauty. They are ranging from the grand historic structures and places to a memorable culinary experience. 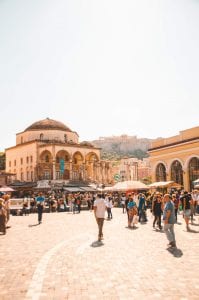 These rock formations of Meteora are situated in the town of Kalabaka. Simultaneously, there were initially 24 Meteora monasteries back in the 14th century when the monks first started settling in. Today, only six remains. The word Meteora could be translated as “suspended in the air” or “hovering in the air,” and these monasteries on the plain of Thessaly are a testament to that. They move so many people with the absolute beauty and grandeur that they hold, in addition to their historical and religious importance.

Monks in Greece during the 11th century are believed to have first started settling into the caves of the rocks at Meteora. When the Turkish empire’s reign struck, they were forced to scale unbelievable heights to escape cruel leaders. In the Meteora monasteries today, you can still see the baskets these monks used to bring their supplies up.

During the Turkish rule here, the Ottoman empire was imposing its culture, among other things, on to the people and the monks here. These monasteries are accredited with preserving the Hellenic culture among those trying times. Declared in the UNESCO World Heritage List, the Meteora monasteries are amongst the gigantic structures standing today that pay homage to the ancient Eastern Greek orthodox.

Traveling to the Meteora Monasteries

All six Meteora monasteries are connected by narrow pathways or roads that you can walk or drive on. They are home to historical art and paintings as they’ve inspired thinkers, artists, and philosophers throughout the centuries. Besides their historical and cultural significance, the monasteries are a sight to behold. With far-stretching landscapes and rock pillars that’ll marvel you, they are a site you don’t want to miss. 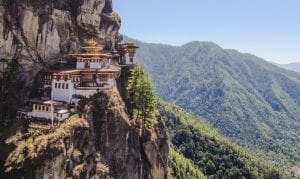 For admission to each monastery, there is a minimum fee of 2 Euros. Women are asked to be in skirts that reach below their knees, and men must have their arms and legs covered. Here you can be provided with guidebooks that help you navigate and teach you about the history and significance.

Nearest to the Meteora monasteries are the town of Kalambaka and the village of Kastraki. Kalambaka boasts of a history of its own. Here you can visit the Cathedral of the Dormition of the Virgin, a beautiful basilica.

The village, on the other hand, is situated right next to the rock pillars of Meteora. Here, adventure seekers can find a little something to do with activities like rock climbing and such. Most people who visit Meteora take shelter here, in either the town of Kalambaka or the village of Kastraki. There are also several restaurants you can choose from to eat at for traditional Greek cuisine.

1) The Great Meteoron or Megalo Meteoro

Arguably one of the grandest among the Meteora monasteries, The Great Meteoron Holy Monastery of the Transfiguration of the Savior is a sight to behold. Constructed upon the ‘Platis Lithos’ and spread across 50 acres, this monastery was founded by monk Athanasios in the mid-14th century, who was the first to scale the rock. 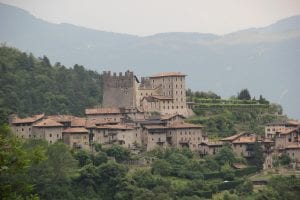 This monastery gets its name after the church of the Transfiguration of Jesus Christ established there by St. Athanasios, a Saint of the Greek Orthodox church and a monk of Mount Athos.

The Monastery of the Holy Transfiguration of the Savior homes captivating 16th-century frescoes by the Theophanis that carry the stories of the Christians that were persecuted by the Romans.

The main church still carries parts of itself that were built back in the 16th century. This part of the Meteora monasteries will, without a doubt, provide you with the tranquility that is so rare in these modern times. This monastery stays close on Tuesdays and Wednesdays, and like all other monasteries here, between 1 to 3 in the afternoons.

The monastery of Varlaam, founded back in around the year 1390, is the second-largest monastery here at Meteora. It is named after Varlaam, who built the first church here, but the area was left for two centuries after his death.

The artist Franco Catalano’s frescoes adorn the walls of the All Saint’s Chapel. There is also a museum here at the Varlaam monastery that has art pieces from the Byzantine time. Other things you can find here include relics, epitaphioi, and other works of religious and historical significance. For the tourists, this monastery remains closed on Fridays.

Situated in the route from the village of Kastraki, Roussanou is at quite a low height compared to the other Meteora monasteries. With the first traces of its discovery ranging back to the 14th century, today, the sanctuary is a sight of beauty. 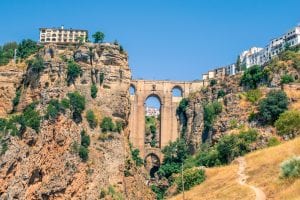 Like the other Meteora monasteries, this was destroyed during the second world war but was rebuilt as a nunnery in 1988, and today, it’s run by around 15 nuns. It’s connected by a well-maintained bridge and has a church that was made a part of this in the late 16th century. It also homes cherished paintings and works of art by a hagiographer.

Built upon 80 m high rock formation, the Holy monastery of St. Nicholas Anapfsas is a multilevel monastery. This, like some of the other Meteora monasteries, is believed to be founded around the mid to late 14th century.

This monastery overlooks some of the most spectacular views—everything ranging from the mountains, slopey terrains, and vibrantly colored trees and plants. 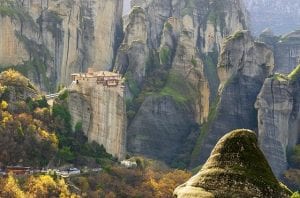 In the monastery itself, on the 1st level, there are paintings and a very peaceful environment. The 2nd level homes the Catholicon, honorary place of the monastery’s namesake, St. Nicholas. The 3rd and the final floor has the famed and precious Holy Table.

There can be found gorgeous murals upon the Holy Table. Other attractions here include St. John Prodromos chapel and frescoes of the passion of Christ and the Virgin Mary. The famed artist Theophanis Strelitzas, popularly known as Theophanes the Cretan, is the artist behind these murals.

At a very approachable distance from the town of Kalabaka, this 14th-century monastery is relatively easy to visit. Also known as the monastery of Agios Stefanos, it just has a small bridge you need to cross to get there, contrary to a lot of steps and other difficult climbing for the other Meteora monasteries. 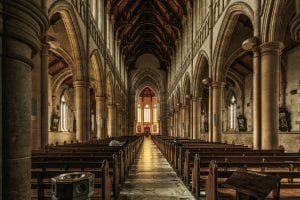 Run by nuns, the monastery has two cathedrals, one of which was destroyed in world war two and the other that was built in dedication to Saint Charalambos in 1798. The respected Saint’s skull is present here, which was given to the nuns back in the day by the Prince of Wallachia.   This monastery overlooks the Thessaly Valley and remains a witness to some of the most tragic parts of Greek history.

Monastery of Agia Triada or the Holy Trinity attracts tourists in large portions due to its famed feature in the James Bond movie ‘For Your Eyes Only.’ The intense drops and dramatic landscapes and the valley that it overlooks have made it an attraction and a part of the famous Hollywood movie series. 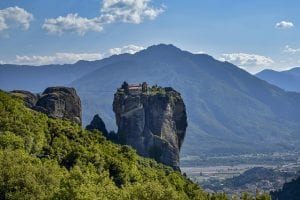 The walls here are graced with famed frescoes by Antonios and Nikolaos, two brothers from the 18th century. It’s a climb of around 140 steps to get to the monastery as you come across the church of Saint John on your way up.

The Meteora Restaurant in Kalambaka serves exquisite quality Mediterranean cuisine. Run by a family for around 5 generations, you can get your hands on some of the most delicious delicacies. Meteoron Panorama, also in Kalambaka, serves you delicious barbeques and Greek dishes while you sit outside and enjoy the view. 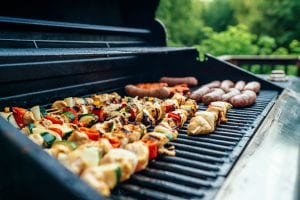 Stefanos Tavern will serve your Greek cuisine needs while also accommodating diets like vegan, vegetarian, or gluten-free. There are lots of other restaurants in the town of Kalambaka that you can choose from.

Elia’s Garden is a beautiful restaurant with plants growing around and rather old and rustic furniture. They serve local and traditional Greek cuisine paired up with delicious Greek wine from their cellar. Restaurant Panellinio is located in the center of the town of Kalambaka on the Town Hall square. They allow you in their kitchen where you can look at the dishes for yourself at the available display. 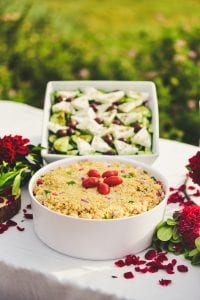 For your accommodations, Pyrgo Adrachti is an attractive choice, set high atop the mountain in Kalambaka, and very close distance from the Meteora monasteries. All the rooms are equipped with wooden furniture, and some of them also have an astounding view of the rocks in Meteora. 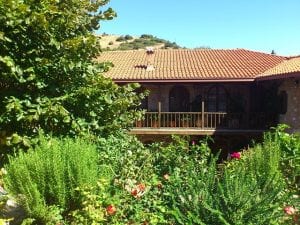 Located in the Mesochori Square in the village of Kastraki are the Archontiko Mesohori Suites and Apartments. With views of the mount Pindos and the rock formations, this place is a mere 10-minute drive from the Meteora monasteries. Here you can have a shared lounge, beautiful wooden furniture, and so much more.

Thus, make sure to add the famed Meteora monasteries to your bucket list destinations. Other articles that may interest you: