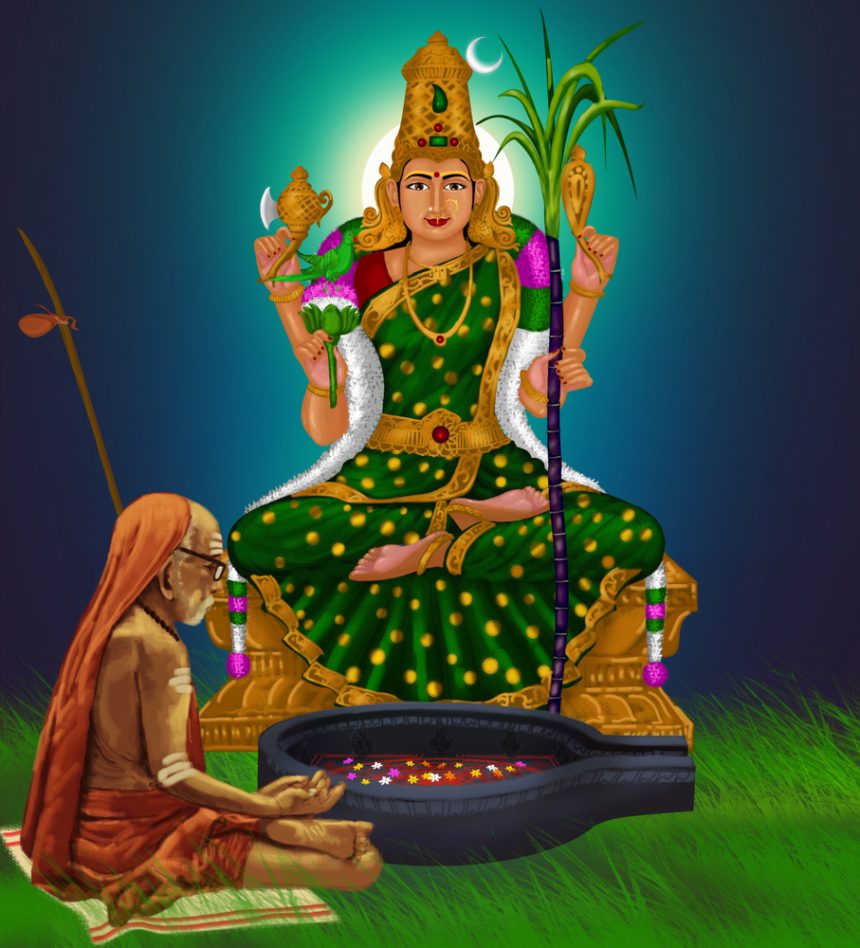 We all love stories, don’t we? Mythological stories remain one of the most popular genres. Whether you are a theist or atheist, you can’t deny that mythological stories are widely popular worldwide. Be it the Clash of Titans or Ramayana; mythology plays a significant role in our lives. Myths are not only a form of cultural truth and religious truth but also a community truth. Today we will be taking you on the journey of one such popular myth of India, the Goddess Kamakshi Story.

South India and grand temples like the Kamakshi Amman temple are complementary to each other. One reason South India has more temples than North India can be the long history of being ruled by mainly Hindu rulers. India can be called a land of mythologies without digging deep into history. Even though Goddess Kamakshi has her main temple in Tamil Nādu of South India, Kamakshi Devi’s story is widely believed throughout India. So, what does the legend say?

Goddess Kamakshi, as her name suggests, is a goddess and mythology lovers already guessed whose incarnation she can be. If you guessed Parvati, then you are right. When I was a kid reading such stories, I got the idea that most female Hindu gods are the forms of Parvati, Lord Shiva’s wife. And the same is true for Kamakshi Devi’s story.

Goddess Kamakshi, or as we can call her Kamakshi Amman, is a Hindu deity. As we have mentioned earlier, Kamakshi Devi’s story mainly revolves around the Kanchi Kamakshi temple of Tamil Nadu. But Amman is also worshipped in the Meenakshi Devi temple of Madurai and Shri Kashi Visalakshi Devi temple at Varanasi.

If you look at the deity of Kamakshi Devi, you might think, the Goddess Kamakshi story must be a story of a peace-loving and doting goddess. I mean, why not? Her face looks like a whole sea of peace and loves only. Yes, you are right to think that. In a way, Kamakshi Amman is worshipped as a peaceful, doting, and mother-like deity. But let us have a look at the other side of the coin.

Legends say Kamakshi Amman used to sit under a mango tree of Kanchipuram, Tamil Nadu, and pray. The deity herself used to pray? But for what? For the same thing, she prayed in the form of Parvati. Yes, for getting married to Lord Shiva. So this is how the Kamakshi Devi story starts.

Kamakshi Amman sat under the mango tree, built an idol of Lord Shiva with sand, and started her indefinite prayer with full devotion. Lord Shiva, as expected, got pleased by her extended devoted meditation, and finally, they got married. In the month of Falgun us, Uttara Nakshatra was considered pious for marriage. Do you know why? Because that is the day when Kamakshi Amman got married to Lord Shiva. The generations-old mango tree in the temple premises strengthens this belief.

Now we know that there is some specific reason behind every such incarnation by God. So what is the reason behind the birth of Goddess Kamakshi? Just to get married to Lord Shiva? Absolutely not. Now the climax of Kamakshi Devi’s story begins with the entry of the Asura.

Most of us mythology lovers know that Brahma was one of the Gods who used to bless anyone who would pray hard to them. By anyone, I mean anyone, literally. To be precise, maybe if the Asuras were not able to get the boons from the Gods, they would never be able to give a tough fight to the Gods, and we would be deprived of such rich stories.

So in the Kamakshi Goddess story, Bandashura Rakshasa is the main villain. He penanced himself severely to please Lord Brahma and achieved a lot of boons from him. Next happened is what you suppose to happen if you give the ultimate power to a villain. Bandashura started troubling the Devthas, a.k.a our Gods. He wanted to drive them away from heaven to rule it.

Now it is obvious when Bandashura was ruling the Earth if the Gods stayed in their real forms, Bandashura would at once kill them. But evil can never win over the truth. So the Gods took the disguise of parrots and stayed in a Champaka tree of Kanchipuram. From there, they started praying to Sri Bala Tripurasundari Devi.

Pleased by their prayers, Sri Bala Tripurasundari Devi took a ferocious form to kill Bandashura. Yes, now the fight sequence of Goddess Kamakshi starts. With eight hands, fully equipped with eighteen dangerous weapons, and the Chakra itself, Sri Bala Tripurasundari Devi prepared for the ultimate fight with Bandashura. She not only defeated Bandashura but also dragged him from Kailash to Kanchipuram in her ferocious avatar.

Even after killing Bandashura, Sri BalaTriourasundari Devi did not calm down. She was so angry that it is believed, the Gods feared going near her as the fumes of her anger could destroy them. So they started praying to calm her down. The ferocious Devi was cooled down by their prayers and directed them to bury Bandashura and build a Jayatsmabha (Victory Stand) on it.

Sri Bala Tripurasundari Devi took the form of the peaceful and motherly Kamakshi Devi. She announced to reside in that place from the day and bless the devotees with her eyes only. The devotees believe Kamakshi Devi fulfills the devotees’ prayers by just one look.

2. The Connection Between Kamakshi Devi and Lord Rama:

We all have read and even watched the Ramayana. Rama’s victorious journey is known to all. But how many of you know the connection between Lord Rama and Goddess Kamakshi? Yes, Lord Rama is a significant character in the Kamakshi Goddess story.

Legends say, King Dasaratha, father of Lord Rama, visited Kamakshi Devi’s temple with prayers to have sons. He performed a Yajna there dedicated to Goddess Kamakshi to get sons. And that is how he got for almighty sons at once. Since then, it is believed childless couples will be blessed with children if they visit Kamakshi Devi.

3. Kamakshi Devi and The Secret of Sri Chakra:

Many of us know the popular story of Devi Saraswati’s curse to Rishi Durvasa. Due to the curse, Rishi Durvasa was born on earth, deaf and dumb. This is another enlightening part of Kamakshi Devi’s story as it was Goddess Kamakshi who blessed Rishi Durvasa with the power to talk and hear. Pleased by Rishi Durvasa’s prayers, Kamakshi Goddess not only blessed him but also allowed him to be her one of three chief worshippers.

As we have revealed earlier, Goddess Kamakshi can be both fire and ice, and anger makes even our Gods blind. So to save the innocent devotees from Kamakshi Devi’s anger, Rishi Durvasa established the Sri Chakra in front of Devi. This Sri Chakra is believed to calm Kamakshi Devi’s wrath as well as represents the Vedas.

Another interesting fact is popular Hindu monk Adi Shankaracharya was the man behind the establishment of the Kanchi math. He was also the one who re-established the Sri Chakra in Kamakshi Devi temple of Kanchipuram.

Which mythology lover doesn’t know about the secret behind the creation of Shakti Piths? It is believed that when Lord Vishnu dissected Devi Parvati’s body with his Chakra, Devi’s navel fell where the temple today is.

The priests make a sand idol of Lord Shiva every day and worship that too. There are many rituals revolving around the temple, and one such is the Brahmotsavam. Every year in January or February, thousands of devotees gather in the Kamakshi Devi temple to see her Viswaroop. This occasion is known as Brahmotsavam.

So this was Kamakshi Devi’s story. If you see the deity, you will feel by heart that this face can only be of a loving mother full of peace, kindness, care, and affection. And with one sight, she can fulfil your wishes. There is another story of Kamadeva and Kamakshi Devi, which you can read here.

There are a lot of other temples on the main temple premises, which you can find here. Even if you are an atheist, at least to see the stunning Gopuram made with gold on the top of the Sanctum, one visit to the temple is a must. And the Kamakshi Devi story is a pleasure to any mythological story lover. So just click here and plan your visit.

What Does the Bible Say About Astrology? (Best 101 Guide)

The One I Wish To Love… 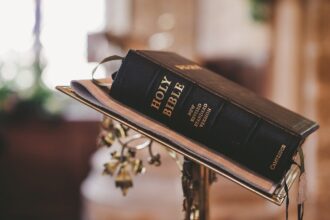 What Does the Bible Say About Astrology? (Best 101 Guide)