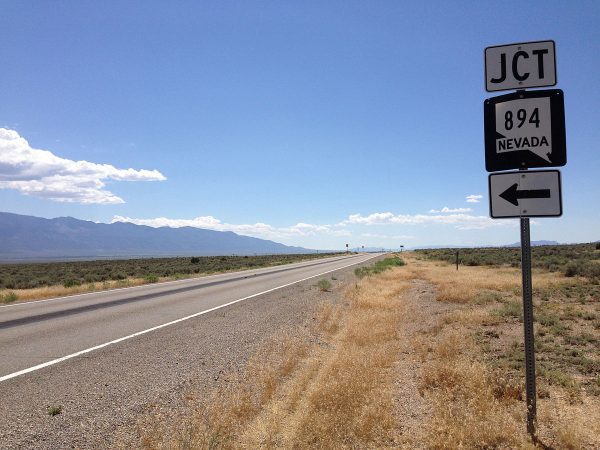 Carved out from the portions of Yuba County, Nevada County was created in 1851. It was named after the mining town of Nevada City, and a name derived from the Sierra Nevada mountains. It has its etymological roots in the Spanish word ‘Nevada,’ which means ‘snow capped.’

During California’s Gold Rush, Nevada City was known as Deer Creek Drive. Later, it was called Caldwell’s Upper Store. A blacksmith soon opened a Gas Station in the region. Coburn’s station was quickly selected as a camp for the railroad crew of the Central Pacific Railroad, who ascended into the Sierra foothills. And in 1849, it was renamed ‘Nevada.’ 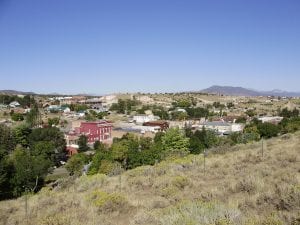 Ever since the discovery of Gold in the north side of Deer Creeks, Nevada County became the leading gold mining center in the country. Most US gold came from Nevada. By 1856, the town of Nevada was incorporated, and the word ‘City’ was added to differentiate it from the nearby Nevada State.

Nevada’s location and mineral wealth made it a potential state during the Civil War. Hence, it got its name, “The Battle Born State.”

Nevada City is famous for being the center of the Northern mines during the Gold Rush era. And it was also the site of the infamous Donner Tragedy.

How Grass Valley received its name remains a mystery. A popular theory suggests that the city was named by settlers who came across a grassy valley while searching for their wandering cattle.

The City’s peaceful beginnings were short-lived, however, with the discovery of gold-bearing quartz around Wolf Creek in the 1800s. There was a sudden economic and population boom with people flocking to the region in search of gold. 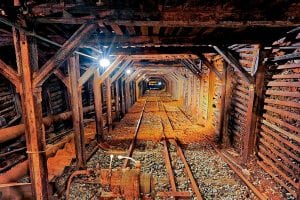 Empire Mine became one of the most substantial mines in California, producing over 5.6 million ounces of gold until it’s closing in the mid-1950s. It carries the tag of being one of the oldest, largest, deepest, and richest gold mines in California. The underground passage covered 367 miles.

Today you can walk in the footsteps of the miners and discover the life of the bygone days of the Gold Rush era by visiting the Empire Mine Living History Museum. 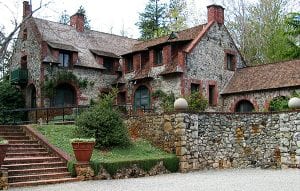 Truckee was initially inhabited by the native tribes of Washoe, Maidu, and Paiute tribes. It soon becomes a bustling town with miners and settlers in the 1860’s.

Truckee’s life started as Gray’s Station in 1863. It was named after Gray’s Roadhouse on the Trans-Sierra Wagon Road.

A blacksmith named Samuel S. Coburn lived here almost from the beginning, and by 1866, the area was known as Coburn’s station. When the Central Pacific Railroad selected the station as it was a railroad station in August 1867, it was renamed Truckee. 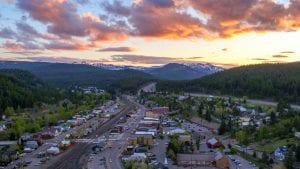 There are various accounts of how Truckee got its name. The name ‘Truckee’ was derived from a friendly Pauite Indian guide who, in 1844, assisted thousands of immigrants migrating west across the Humboldt sink. The Indian guide’s name sounded like ‘Tro-kay’ to the white men, so they dubbed him as ‘Truckee.’

Another theory says that the first European settlers encountered the Sierra Nevada tribes. The friendly chief rode towards them, yelling “Tro-kay,” which is a Paiute word for “Everything is alright.” The Europeans assumed that he was yelling out his name.

This railroad town of Truckee added a rectangle section to the map of Nevada. The founders wanted to gain access to the transcontinental railroad; therefore, they acquired Truckee. And what’s remarkable is that the final shape of the map resembled ‘Deringer pocket pistol.’

Logging played a crucial industry in the region. Joseph Gray and George Schaffer carry the credit for setting up the first Lumber Mill in Truckee.

Life in Truckee was affected continuously by frequent fires. It has seen major ones in the years 1868, 1869, 1871, 1873, 1875, 1878, and 1891. But the settlers had bravely fought the fires and were determined to rebuild their town—each time constructing better structures.

Nevada City holds the county seat. It is one of California’s most beautiful cities. It got recorded at the National Register of Historic Places. This is the reason why the buildings had been preserved just as it like the early founding years. 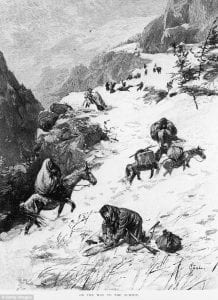 Nevada County is known for it’s infamous Donner Tragedy. It was one of the worst disasters of overland migration to California. The story of this tragedy still looms large in American folklore. As disturbing as it seems, cannibalism can show up at the most unexpected points in history.

In 1846, the Donner Party crew of 89 followed a branch of the Emigrant trail known as the California Trail to the Truckee in order to cross the Donner Pass. The column of ox-drawn wagons carried families consisting of 29 men, 15 women, and 43 children. They were one of the last major pioneer groups during the Gold Rush years.

The Donner Party, also known as Donner-Reed Party, was headed by its captain George Donner. Their trip started dangerously late during the pioneer season, because of which, they failed to pass the treacherous Western mountain before winter set it.

Lansford Hastings suggested a shortcut to California, which added another month to their journey. And with it, they saw an early blizzard covering the Sierra Nevada with several feats of snow. The mountain pass soon transformed into Icy roadblocks, which forced the Donner Party to retreat to nearby Truckee Lake and wait out winter in worn-out tents and cabins.

The pioneers spend their winter of 1846 in the mountains trapped in the snow. As hypothermia set it and food ran out, the people resorted to the most significant human taboo – cannibalism. It was survival cannibalism. Out in the snowbanks, they found a great source of protein. The dead bodies of their comrades were lying there. Soon, out of starvation, they were feeding on the dead bodies.

On October 16, 1846, 15 members of the Donner Party walk out of the mountain to find help. Seven of them managed to reach the California ranch and helped organized rescue efforts. This journey later came to be known as “Forlorn Hope.”

The rescue team reached them in 1849. It took four teams and more than two-and-a-half months to bring the surviving members of the Donner Party back to the civilization. Out of the 87 members who started the journey, only 47 survived. 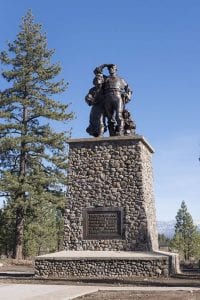 Today, the Donner Memorial State Park stands at the campsite of the Donner Party. Here, you can witness a part of Sierra Nevada’s geological history with granites rising within the crust of the earth in enormous bubbles that had been cooled and hardened to be exposed by erosion.

Gold Hill of Nevada County: Center of Northern Gold Mine 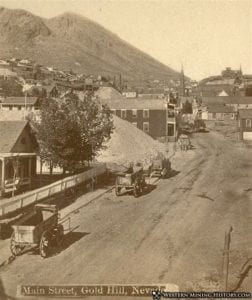 Gold Hill in Grass Valley, Nevada County, was the site of one of the first discoveries of quartz gold in California.  While quartz gold was found in other areas of Nevada County, it was the find here near Wolf Creek that gave birth to an excitement leading to the start of a rush for quartz mining and the subsequent creation of the Gold Country quartz mining Industry.

George Knight is credited for finding gold in the Grass Valley hillside. He came across a white quartz rock laced with yellow while mining. He pounded the rock with a cast iron skillet and hammer, then washed out the gold. It was he who renamed the location at Grass Valley as ‘Gold Hill,’ and his claim became the Gold Hill Mine.

Knight and his friend soon construct a crude stamp mill made of local forest pine tree logs and equip it with metal boots. It produced $ 4,000,000 between 1850-1852. Champion, Providence, Canada Hill, and Huge were some of the important mine industry during the early years of the Gold Rush in Nevada County.

Nevada County is also known for having the first technology moments. In the year 1852, America saw it’s first Hydraulic mining coming into operation here in the Grass Valley.

Did you know that Nevada City and Grass Valley were among the first cities to have lights in the USA? 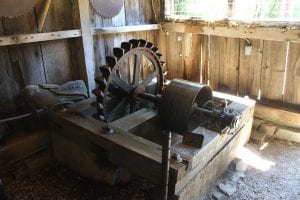 Built-in Nevada County in 1856, the foundry became one of the first manufacturing sites of the Pelton Wheel. Edward Cooker started up the Nevada Iron Foundry and Machine Shop in 1855 to serve the needs of loggers and California Gold Rush miners in Sierra Nevada foothills.

Lester Allan Pelton first developed a new type of water wheel in the late 1870s. He soon bought it to the foundry and tested it before manufacturing the first Pelton Wheel. 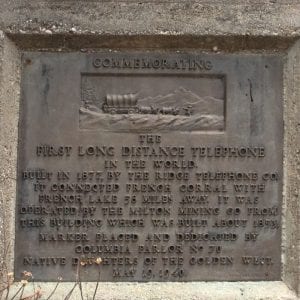 It was established in 1877 by the Ridge Telephone Company. It connected French Corral with Bowman Lake at the headwaters of Yuba River.

The railroad was built in 1876. What’s intriguing about this railroad is that it had never been robbed ever since it started to ply down the rails carrying gold. The chief engineer, John Flint Kidder, made it clear that he would hunt down and killed anyone who tried. The robbers and thieves did not want to sacrifice their lives over Kidder’s gold when they had an immense opportunity of finding gold themselves in the region. 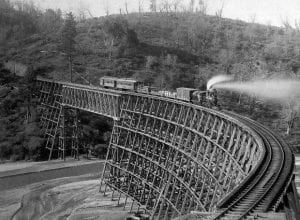 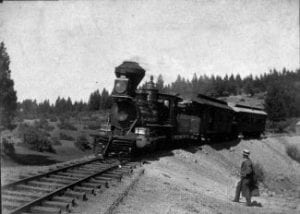 The railroad is located in Northern California’s Nevada County and Placer County, connecting with the Central Pacific Railroad. It carried freight as well as passengers. The rail services began in 1876 till 1942 when it was closed by the Presidential decree of Franklin D. Roosevelt. It was closed due to the Advent of WWII when all non-essential business and gold mines were closed down.

Nevada County Narrow Gauge Railroad and Transportation Museum were set up in order to honor the history of the 22-mile railroad that ran from Colfax to the Grass Valley ending in Nevada City. 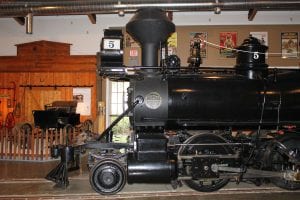 Today, it exhibits more than 40 pieces of transportation history, including buggies. Nevada’s first car is also preserved here in the museum. 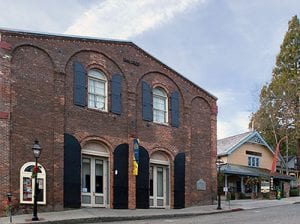 The grand opening of this theatre happened in the same year of 1865 when John Wilkes Booth assassinated President Lincoln.

Mark Twain also made an appearance here at the Nevada Theatre.

Nevada’s National Exchange Hotel on Broad Street is also one of the oldest continuously operating hotels in the west of the Rocky Mountains. In 2012, the hotel was aired in the episode of Ghost Adventures because of the reports of paranormal activities.

Nevada County has it all: all innovative technology and outdoor recreational outdoor activities. With its rich history of the California Gold Rush times, Nevada County serves as a popular tourist spot today.

It is home to people from all walks of life. The County’s strength encompasses the diverse category of arts, education, recreation, technology, and agriculture. Many who reside here in Nevada County are entrepreneurs who have developed successful startup businesses in service and technology.

From being the center of a gold mine in northern California, the small town of Nevada has evolved to a bustling city with economic frenzy and population boom. The region has gained its popularity because of the discovery of gold quartz in the 1800s, which has attracted settlers from another part of the country. In spite of being located in one of the driest regions of America with its arid surroundings, it had attracted millions of people who came in search of gold.

The state had been the principal supplier of gold to the US. And the gold mines of Nevada continued to thrive even during the WWII and the civil war. Rich underground mines continued to flourish during the Great Depression too.

Nevada County is truly a remarkable place bearing the witness of the American dream coming true. It is a place where people have sweat and exhausted their energy in the hopes of finding their dream.

Nevada County invites us to come and experience what life was like, for the founding members and miners during the rush for California Gold. Grass Valley and Nevada City offer a range of gold mining history from explaining the different mining techniques to exhibits of historic pieces from the Goldrush era.