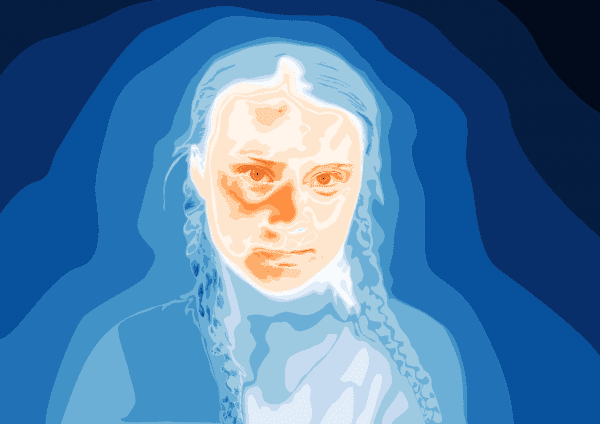 One fine day in August 2018, a 15 year old Swedish girl took position outside of Sweden’s parliament, holding up a simple sign, with some black letters written on a whiteboard. This was Greta Thunberg and the message read, ‘School Strike for Climate’. Talking to BBC back then she said it seemed that it was only she who was concerned about ecological and climate crisis.

She stood there alone, but not for very long.

Within one year, her message carried on, weathered all storms and inspired millions of students and youngsters across the world to demand decisive action on all these concerns. Her struggle since then also got her Nobel Peace Prize nomination in 2019. Even though Greta didn’t receive the prize, she’s one of the strong contenders for 2020. Let’s tell you a bit more about this young climate change activist who has taken the world by storm.

Where does she come from?

Greta Thunberg was born on January 3, 2003 and has a younger sister at home. She was brought up in Stockholm by her opera singer mother Malena Ernman and her father Svante Thunberg who is an actor. In fact, she is a descendant of a scientist named Svante Arrhenius who had won the Nobel Prize for Chemistry in the year 1903 for coming up with a greenhouse effect model.

Greta has Asperger’s syndrome, widely known as a developmental disorder which many consider is both a superpower and a gift for her.

How she got involved in all these protests?

Greta Thunberg learnt about climate change at the age of eight and wondered why no one was taking any action. She wondered why no one was talking about it despite being aware of it. She took part in a climate change related essay competition conducted by a local newspaper, and won it in May 2018. Exactly 3 months later, she began her protest opposite the Swedish Parliament, making a vow that she will continue until the government accomplished the carbon emissions target set by the various world leaders in 2015, in Paris. Her parents didn’t support her protests outright in the beginning, and told her that she’d be on her own if she went ahead.

How her protests took shape of a global movement?

Once she was pictured opposite the Swedish Parliament, with her sign, her protest went viral across all social media platforms. Slowly, she found support from all parts of the world and by December 2018, over 20,000 students across the world joined her mission.

She travelled to some of these strikes across Europe, opting for train travel to limit the environmental impact. Last September, she travelled to New York and spoke at the United Nations Climate Conference, reaching there in two weeks, through a zero emissions boat. Upon her arrival, several millions of people across the world participated in a climate strike highlighting her influence.

Later in her address at the United Nations, she took politicians to task, blasting them for depending on youngsters for answers. She said, “How dare you?” and that she shouldn’t be there, but in her school across the ocean, yet all the leaders came to the younger generation for hope. How dare they? She blamed them that they stole her dreams and her childhood with their empty words, and warned them that the next generation is watching them closely.