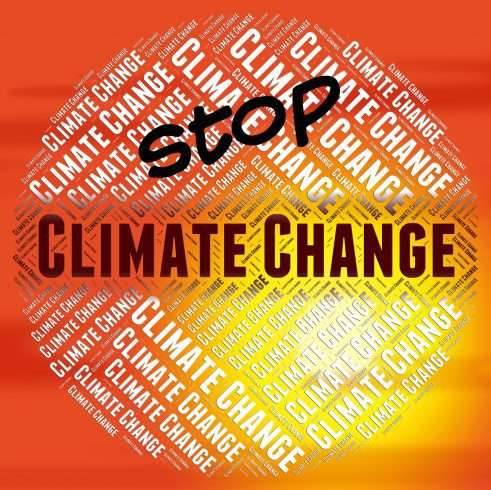 The word climate refers to the distribution of weather conditions over a particular area. The atmosphere of a location is influenced by factors such as climate, latitude, etc.
Change in climate is the change in this weather condition, which lasts for a prolonged period. Climatic turnovers are caused by the harmful radiation emitted by the sun, the abiotic and biotic processes, human activities or interference with the natural processes, etc.
The toxic emissions are coming from the sun, results in an increase in the average surface temperature, because of greenhouse gases like carbon dioxide, methane, nitrous oxide, etc. This effect is termed as ‘Global Warming’. Global warming can have adverse effects on the entire ecosystem in the long run. As a result, of these climatic changes, the climate of India has become increasingly volatile over the past many years, and will continue over the coming decades and maybe even centuries. Not just India, global warming is a problem that the entire world is facing. Over the past 30 years, the global temperature has risen by 1 degree (Fahrenheit) and predictions are that it may increase by an estimated 2 to 8.6 degrees (Fahrenheit) by the year 2100. Future climate change is expected to have an effect on the tundra region, mangroves and coral reefs and also might result in the extinction of several species of animals. Rise in Sea Levels:
Another problem that the world faces is that along with the rising of temperatures, there is an increase in the sea levels also. Sea level is rising by an estimated 1.7mm every year. India, being a peninsula, will have dangerous effects, maybe not immediately or through the months, but through the years and decades due to this. There are many low lying areas in our country which are flood prone zones, and inundation causes death, destruction and devastation.
The coastal states of Andhra Pradesh, Karnataka, and Kerala, face a significant risk from the sea level rise, which could flood land (including agricultural land) and cause damage to coastal infrastructure and other property. Flooding could displace a large number of people and could destroy roads, bridges, houses. This will put lot of pressure on the government as the cost involves in rebuilding these will be very high
The rise in temperature causes the melting of the ice in the Himalayan region and also the Arctic and Antarctic regions. Because of this, there is unseasonal rainfall, floods, or in some years very less rainfall. When there is a drought or inadequate rainfall in a year, agriculture, which plays a significant role in the Indian economy, is affected.

Water situation and Ecosystem:
The rising temperatures also have become a threat to the fresh water and energy resources. All kinds of living beings and their habitat are being affected by the climatic changes. Heat waves, droughts, floods. The drastic weather changes all affect the habitat and life. The ecosystem, which plays a vital role in the survival of animals, flora and fauna, or the survival of the earth itself, is being disrupted because of climate changes. Another major problem is deforestation. Trees are destroyed every day by industrialization, urbanization and for the products that can be extracted from forests for wood, rubber, paper, etc.
Another man made problem contributing to global warming is the pollutants and oil and chemical spills from factories and burning of fossil fuels. Harmful gases are emitted resulting in air pollution. These gases combine sulfur and form harmful sulfur dioxides that lead to acid rains, thereby killing trees and leading to deforestation. Acid rains also have an impact on aquatic life. The oil or chemical spills pollute the water to such an extent that its consequences last for many years as happened in the Bhopal gas tragedy, in India, where thousands of people were exposed to the harmful gas released from a factory
Solutions:
Individual, unpredictable factors like environmental catastrophes- earthquakes, tsunamis also cause deaths and massive losses, but cannot be controlled, but half of the factors influencing frequent necessary alterations are man-made objects and hence can be controlled to a certain extent. Climate changes have become one of the major problems of today’s India and if not controlled, will be one of the major problems of tomorrow and will lead few species of animals to their grave, over the centuries.
Tree plantation:
We, the people of India have to play our part in the control of these climatic conditions. As an initiative, the ‘Green India’ mission has been started by the government of India, which targets afforestation of 10 million hectares of land in the coming decade. Trees are our primary source of oxygen and also a source of rainfall. Planting trees should be encouraged. It is not just the duty of the government to control global warming, but every citizen of India should do their part, as a team or as an individual to reduce the pollution first.

Utilization of renewable energy resources:
The emission of chlouroflouro carbons can be lessened in factories and can be replaced with hydrofluoric carbons, which are less harmful. In India, we use non-renewable sources of energy like coal for electricity generation. This method should be discouraged and the utilization of natural renewable sources of energy like solar power, wind power should be encouraged.
Reduce pollution and carbon emission:
As population growth has adverse effects on climate change, we should control population. Because when the population is more, the utilization of sources like water sources increases, leading to ground water subsidy. Also, the number of people using cars or their means of transport should try to be controlled. People can use bicycles or walk for short distances instead of vehicles, use public transport for commuting, etc. This can reduce pollution and traffic congestion to some extent across India. Awareness should be spread among the people about the harmful effects of pollution and how it has effects on the climate change and life too, in the long run.

People should have a perception of the situation of India today, what it will be tomorrow if the situation continues and should be up to date with the new energy saving technologies, For example the usage of CFL bulbs instead of standard ones to save electricity as all these are contributing factors to the climate change in India.
Efficient utilization of water resources:
To overcome the problem of flooding in low-lying areas, an integrated water system can be developed throughout India, which will connect all the rivers, so that when there is an excess of water in one region, water from that place will flow to other areas, thus reducing the problem of wetter logging. Hence, the areas that have inadequate water supply can be benefited. Each and every individual can help in any way to work forward to creating a pollution free country and take part together as a nation in reducing this problem of global warming.
Not only India suffers due to climate change, but the whole world does. To solve this critical environment issue of our era, which has become a threat, a menace to our life and habitat, we must all work together, as children of our Mother India, to help save it and to help the world save itself. It is not just the duty of the government or the job of an organization to reduce global warming, but the duty of every individual to play their role in diminishing this life threat.