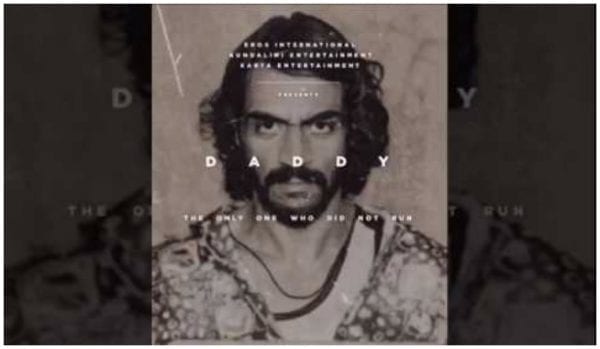 Whenever you think of an edgy and intriguing character, has Arjun Ramphal ever crossed your mind? If not then the just-released trailer of Daddy will convince you enough. Daddy is a biopic based on the life of gangster-turned- politician Arun Gawli. It gives a descriptive insight of Mumbai’s underworld and covers four decades with multiple perspectives.

Considering the trailers, it is very well evident that Arjun Ramphal has transformed like never before and has given everything to be the lead role. The trailer shows that the movie has successfully recreated the setup of 1970s underworld of Mumbai.

His crisp dialogues loaded with Marathi accent and signature Maharashtrian attire justified with his suitable body language gives an easy access to gangster Arun Gawli’s life. Arjun Ramphal himself released poster of his upcoming movie a few days back on social networking handles. In the poster, with a prosthetic nose, long and muffled hairs, beard and an angry young man look, he looked so much like a mafia.

Daddy’s teaser was released last year in December and it’s just launched trailer had made the viewers even more curious and excited. Arjun Ramphal had a lot of expectations from his upcoming movie and his performance seems justified and perfect.

This movie has been directed and co-written Ashim Ahluwalia. Talented actors like Farhan Akhtar, Aishwarya Rajesh, and Mir Sarwah also starred in this movie and performed really well. The movie was supposed to release on 21 July 2017 but on the request of Arun Gawli’s daughter, the release dates have been postponed to 8 September 2017.

By then Arun Gawli will be out on parole and his family wants to watch the film together. The family is very much attached to their daughter and other members of his family as well. Geeta his daughter couldn’t stop appreciating Arjun and his whole team. She also states that since the last 3 years Arjun has got really close to Arun and his family. They all are very much excited to watch the film. The film releases on 8 September 2017.