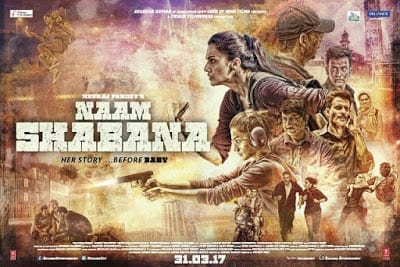 I thought the movie was never going to end, and when it did, I sighed, with relief.

Being the prequel of  2015 spy thriller hit ‘baby’, the movie ‘Naam Shabana’ had sky-high expectations, which the movie brutally shattered; Painfully long, unbearably boring and overly predictable, the movie is just a drag and the background music doesn’t help either, it somehow enhances the irritability of the flick. There is nothing different or engaging about the movie, anyone who has watched even a few Bollywood movies can predict the entire movie, let alone the next scene. The problem with the plot is, well, that there isn’t any. The first half of the movie deals with revenge and the second half with spy thriller and both the parts are equally typical and boring. The only good thing about the movie is the casting and the effortless acting. Akshay Kumar, Anupam Kher, Danny; though the screen time is limited, they make it worth it. Even in the lack of good direction and screenplay, Manoj Vajpayee and Taapsee Pannu did justice to their roles. The actors tried their best to save the movie, but couldn’t. Neeraj Pandey, who gave us some of the most remembered movies in Bollywood like, ‘A Wednesday’, ‘Special 26’ and ‘Baby’, couldn’t keep the audience engaged this time. Although Neeraj wrote the story, he handed over the responsibility of direction to Shivam Nair which can be one of the reasons of the movie not being up to mark. However, Neeraj’s screenplay isn’t as deep and intense as his previous flicks either.

Tulika May 1, 2022
Share this Article
Facebook TwitterEmail Print
What do you think?
Love0
Sad0
Happy0
Sleepy0
Angry0
Dead0
Wink0
Posted by Tulika
A law student, wading through life with books, music and a dash of sarcasm.
Leave a comment Leave a comment