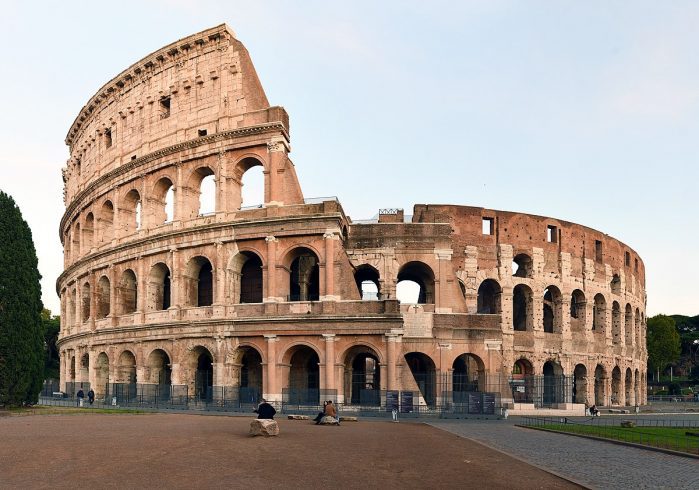 “Rome is not like any other city. It’s a big museum, a living room that shall be covered on one’s toes.”

Rome is one big museum, just as all the great poets and philosophers have said, and Colosseum Rome is the centerpiece of that museum. The largest amphitheater to have ever been built and to ever exist. Yes, you heard that right! We still have no competition to The Colosseum Rome. What does Colosseum Rome offer, being the large and old amphitheater today standing from 80 AD?

Keep reading to find out.

Colosseum Rome was called the Flavian Amphitheatre because it was built by the Flavian dynasty. This old amphitheater has held about 65000 spectators on average and has been used at various times because of its magnanimous space and history.

It was built using volcanic rock, travertine limestone, and brick-faced concrete. Being the ultimate symbol of Imperial Rome, Colosseum Rome has held functions such as:

And several other purposes.

The last time this happened was when the American state of Connecticut abolished capital punishment in April 2012. Imperial Rome continues to hold its legacy even in today’s world through Colosseum Rome. 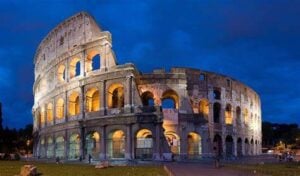 And in this way, Colosseum Rome bears the values of respect, status, uprightness, and faithfulness. These are the central ideas of the Roman empire.

3.Colosseum Rome was built to hold around 70.000 spectators all at once. But today, it can barely accommodate a few hundred people. Blame the damage done to the marvel by natural disasters as well as people. Now, concerts are held just outside the Colosseum Rome. People use it as a backdrop, and Colosseum remains to be as beautiful as it was.

4.Earlier Greek theatres were built in the Hillsides, which ensured extra support to the entire building. Colosseum Rome was built as an entirely free-standing structure. It was intended to be the center of the city, thereby connecting the city.

5.The Amphitheatre had over 80 entrances, out of which 4 were meant for the elite. The northern and main entrance was reserved for the Roman emperor. The northern entrance is still standing upright, while the other entrances have suffered major collapse and breakdown through the years.

All the entrance and exit doors were meticulously numbered. Because it was such a magnanimous building, it also required planned doors of exit for times of emergency. Colosseum Rome was built in such a way that if an urgent need arises, evacuation becomes as easy as it can be.

6.The hypogeum, which is clearly visible even now, was not a part of the original plan. It was built later by Emperor Domitian. The hypogeum of Colosseum Rome consisted of a network of tunnels and cages that were used as a living place for gladiators and animals. The Gladiators had their barracks at the Ludus Magnus, and these were also connected to the tunnels.

The word “hypogeum” meant underground. The Hypogeum of The Colosseum Rome is right below the Arena. 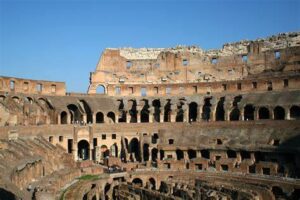 7.Talking about the Arena, it measures 83×48 meters. The arena floor was made of wood. This layer of wood was covered by sand. This part of Colosseum Rome does not exist as it is today.

8.The Colosseum Rome is a sacred space for Christianity.

Although it was not built for that purpose nor treated like one earlier, the notion changed drastically after Pope Benedict XIV expressed his view. From that time, Colosseum Rome is seen as a place where many Christians have been martyred. He installed Stations of Cross and declared that space is sanctified by the blood of Christians who were martyred at the place.

There is very little evidence that proves that Christians were martyred at Colosseum. But the supposition that they may have been paved the way for this belief. Around the same time, Colosseum Rome’s use as a quarry also became forbidden for the same reason. This brings me to the next interesting fact.

9. The Colosseum Rome was used as a Quarry at one point in time. This essentially means that the architecture material was taken and used for the construction of other sacred places. This is one of the major reasons that the Colosseum Rome is not as marvelous as it was when it was built and other natural reasons.

10.The seating arrangement in The Colosseum Rome reflected the hierarchical structure of the Imperial Roman society.

There were special boxes in the north and south ends reserved especially for the Emperor and the Vestal Virgins. One possible reason was that these places provided the best view of the arena.

Vestal virgins were the priestesses of the Roman goddess of the hearth, Vesta. Names of some senators can still be seen carved on the stones in these ends of the Colosseum. It is believed that it was a sign of reserving the seat.

The different sections were as follows:

Another part was constructed later where slaves and women were occupied. The credit for this goes to Domitian. It is believed not to have any place for sitting.

There were specific places for some other special groups of people as well—for example, soldiers on leave, priests, and foreign dignitaries.

The Colosseum Rome was a very well-planned structure; Each spectator was given a ticket stating the row and seat number to avoid any confusion. 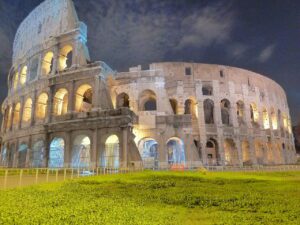 Rome has a rich heritage, and that comes with various places of tourist attractions. Besides The Colosseum Rome, there are other places that you should not miss when you have planned a trip to Rome. Here are a few:

It is quite peaceful and thrilling to visit the smallest independent state of the world. It is ruled by the supreme head of the Roman Catholic Church, the Pope. Michaelangelo’s masterpiece should not be missed while visiting this place for sure.

It is considered the most well-preserved monument of ancient Rome. It is a former Roman temple, now used as the church of Saint Mary. Many archaeologists believe that it is well preserved because of its continuous use throughout the years. What we know for sure is the fact that one should not miss visiting this piece of art. 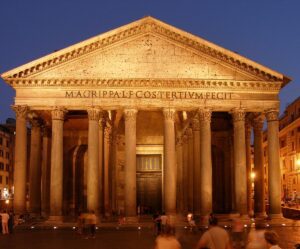 Stepping into the ruins of a city that is known to have thrived for many centuries is indeed heart throbbing. Roman Forum is the place where the religious and cultural life of most Roman citizens was centered. Only little remains of this history but the imagination that what must have existed is thrilling and exciting. You should see it for yourself.

Pope Clement XII built this beautiful place. It features the Roman sea god Oceanus with horses and shells. It is believed that throwing a coin in the fountain assures your return to Rome. The water from this fountain is collected in a large basin.

This place is one of Rome’s largest gardens. Visit if you want to wind down a bit. Another attraction is how this place is home to various rare and beautiful Borghese art. The English-style park has walkways, and you can also rent boats here.

This beautiful building has been used as a Papal residence and as a fortress. It is a drum-shaped structure that contains beauty in all its glory, truly. Do not miss visiting here. 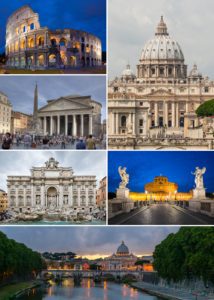 The Colosseum Rome is surely one place that was built to show off the glory of Imperial Rome. The historical significance of the Colosseum is Colossus (No, I mean it, and you know it). It has many interesting facts about it and an equal number of conspiracies or analogies, whatever you prefer to call it.

In any case, one should not miss visiting a place where the air is filled with legacy, even if it seems like bare ruins to the naked eye.

Colosseum Rome is the centerpiece of Rome, but what this museum has to offer can only be found out upon visiting.