The Diary Of A Young Girl

Shaily Badonia
Hello! I am a creative technocrat...and I have my own theories of life!

MY LIFE MY RULES….

Being a girl is definitely the world’s most challenging job ever! If you try to peep inside her life… you will find yourself lost in her dilemma rather than drawing out a decision yourself… touches of melancholy rather than happiness!  We are often misled into believing that only girls from small towns have a hard time living in such a time, but that conception is utterly wrong. The small-town girls, however, do have to take the more problematic way compared to the others. They come to the city with hopes to find a path between clashing thoughts of the orthodox society and the modernising world!! Here is a story from The Diary Of A Girl.

This is a story of a 25 year old girl Ruchi, who was born and brought up in the city of Bhopal. She was an engineer graduate in Information Technology and worked for a software company and was currently living in Pune. When she was in college she was a very happy go lucky kind of girl! She was always surrounded by boys not because she was pretty but because she was so fascinating and full of life and everyone enjoyed her company!! Many People tried to stop her but she was that gush of wind, that could never be controlled..!! Slowly and gradually this journey came to an end after four years of engineering! The young confident girl is finally going to enter the wheel of actual materialistic life!!! She shifts to Pune after 3 months of completion of her final year of engineering. .

The city is full of people, who are in a hurry, always! On seeing the big- big skyscrapers she was flabbergasted. The girls living in Pune were independent and had their own free will, Ruchi was astounded to see their way of living. She thought that they were all like her, and no one would stop her here. She believed that she was the master of her own aspirations! This also made her feel as if she could conquer the world!

The first day in her office was amazing! She definitely stood out of the crowd because of her passion of learning the work. As she was constitutionally friendly… on the first day, she made many male friends. There was an office party at night. She came late at her apartment. She heard one of the neighbours questioning her character for coming home late! She felt bad and soon realised that there is no difference in the mentality of people anywhere. They remain the same. She now knew that people are not what they pretend to be! People pretend that they are heading towards modernisation and are walking at the same pace as the world where every one has the same rights and the freedom to express themselves. Every one has the right to live their own life!

She was depressed to witness the reality! Her roommate had gone through the same experience, and she told Ruchi that life is all about experiences- some are good, and most of the others are bad! There has always has been a conflict between social attitude and individual attitude. Social attitudes tell us to live our life straight, and these attitudes are formed by varying experiences of individuals so that others do not commit the same mistake. But life is not about walking straight; it’s about falling, walking, stumbling, and also standing right back up! All these will help us create new experiences. These words gave me new energy to fight the world and live life the way she did! 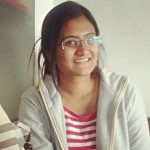 Hello! I am a creative technocrat...and I have my own theories of life!