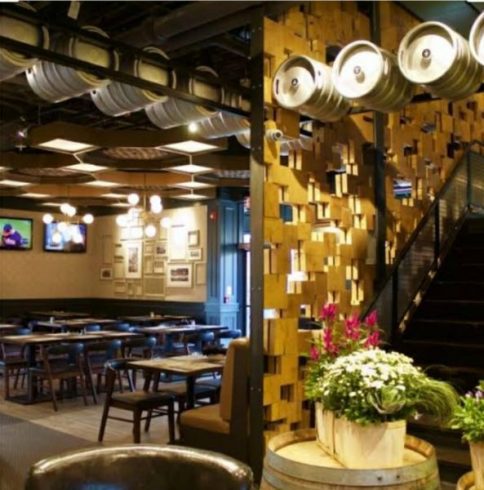 People who have a liking for wines and whiskeys tend to travel all over the world in search of the best breweries. And what is better than a Barrel House or Barrel themed brewery.

So in this article, we will learn every exciting thing about a barrelhouse and the architecture of world-renowned barrel houses.

What is a Barrel House?

If we look at the definition of a barrelhouse it says that a barrel house is a cheap saloon it a room where barrels of a very inferior kind of whisky is tapped, and the whiskey is given as a glassful right out of the barrel. In the 1870 era, a barrelhouse was associated with brothels is a reference to barrels of beer or booze typically stacked along the wall.

Earlier a  barrelhouse used to be a juke joint where an early form of wild jazz, an improvised piano, and an accented two-beat rhythm used to play and people gathered to drink the cheap whiskey and wine.

But nowadays when we talk about a barrelhouse it has a different meaning. These days barrelhouses have become the best spots if you are looking for great wines and whiskeys alongside mouth-watering foods.

The flavour of the alcohol depends on the period for which it is kept in the barrel and how wet the barrel was. Sometimes the barrels are charred from the inside which gives the whiskey a flavour of barrel char.

The beers are aged in all sorts of barrels from cigar to rum and whiskey, calvados, Chardonnay, and many more aromas. Some barrel houses have also opened small pubs and restaurants along with alcohol bars.

They serve delicious and stunning dishes prepared by great chefs, along with traditionally cultured wines and whiskeys. The ingredients are taken up from local farmers to support them. So a Barrel House venue can be a great destination to relish authentic wines and whiskeys along with mouth savoury dishes.

So here is a list of famous barrel houses, everything about their architecture and what people love about them.

Founded by Jasper Newton or Jack Daniel, the Jack Daniels namesake is about one hundred and sixty-five years old now. It is America’s oldest distillery and was discovered when Jasper Newton ran away from his house at the age of seven and started making whiskey with Lutheran Minister. 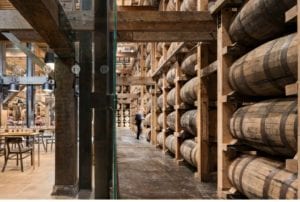 The minister later sold him the business at $25 to keep the church family pleased as they started questioning his morals. The Jack Daniel distillery has about seventy-eight barrel houses in Tennessee.

One of the most valuable alcohol brands in the world, it celebrates its founder’s birthday in September. One of the oldest barrel houses is in Lynchburg, Tennessee at a ninety-minute drive from Nashville. It is manufactured in one hundred forty-nine years old distillery, a site named on the US Department of the Interior’s Register of Historic Places. 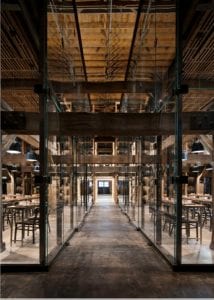 The Jack Daniels barrel house has been manufactured in a way to create an amazing experience for the visitors where they can enjoy the commitment to the authenticity of Jack Daniels at full view.

The distillery is part barrel house and part refined tasting environment. This type of architecture encourages interchange between those who work, learn, and live in Moore County and the visitors who have great knowledge about whiskey and can share it with other attendees. 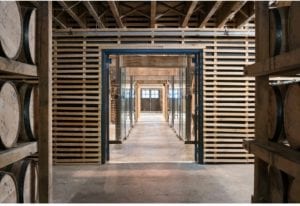 The ruggedly crafted timber-framed building with the detail of steel and glass framed design, the architecture brings together historic and operating barrel house structure suitable for the enjoyment of incoming visitors.

In the east wing of the Jack Daniels Barrelhouse, the whiskey barrels are tapped and are stored to reach maturity.

Cozy and civilized tasting areas surround the main hall. These glass pavillions framed with steel give an insight into the 1930s industrial aesthetic in a modern way. Down the central corridor, there is a three-story open area with plenty of natural light.

The last threshold is the Jack Daniels Visitor Centre, which is the point of origin of all the distillery tours. The great architecture of The Visitor Centre is like a modern log cabin with high wooden ceilings and natural light. Here the visitors can pick up a whiskey bottle of their own choice from the gift shop mingle with others.

The whole Barrelhouse is decorated and handmade designed using old barrels which can be used only once for making whiskey. There is a giant open furnace where sugar maple charcoal for whiskey is mellowed, and it is hard to miss.

The Barrelhouse Tavern in downtown Sausalito is a beautiful setting where you can enjoy local seasonal ingredients and sustainability through a unique farm to table experience. It features classic and barrels aged cocktails. The wine menu of Barrelhouse tavern accentuates California winemakers. 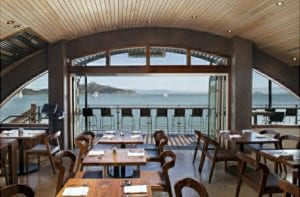 It offers rotating local microbrews and wines on tap. The Barrelhouse tavern features their handcrafted sodas with seasonal fruits. It also features an immense Carrera Marble bar, a snug lounge, and a wood-fired pizza oven. All the 140 seats have an amazing view of the Bay and San Francisco beyond and the outdoor deck sits right over the water.

Now talking about the architecture of The Barrelhouse tavern is built over an area of five thousand square feet on Bridgeway Avenue. The building originally built in the 1900s was the original ferry terminal that shuttled travellers from Sausalito to San Francisco before the beginning of the Golden Gate Bridge. 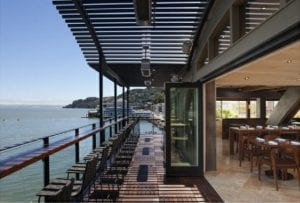 Endeavours were taken to keep the historical characteristics of the building intact like the maple ceiling which curls in the form of a barrel.

The Carrera marble bar occupies the centre of the architecture. On its left, there is a cozy lounge and a blackened steel fire orb which is surrounded by plush banquettes and ottomans. 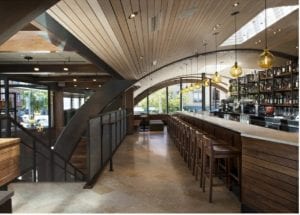 On the right of the Carrera marble bar is the champagne display on custom curved shelvings and the main finding hall. On the entrance, there is a walnut lined staircase and a liquor and wine holding metal mesh structure which is made up of blackened steel and lines with formed bronze.

Designed by CCS architecture with designers Thomas Michael, Sarah Klocke, and Danielle Velasco is a marvel and an awesome place to visit. Their collaboration with local farmers encourages the local population and brings in fresh fruits for wine brewing and restaurant.

The Roy Pitz Barrel House is a brewpub situated in Philadelphia by Liquid Artists at Roy Pitz. Featuring its portfolio of award-winning beer and some location-specific barrel-aged sour and funky wines this Barrel House continues to relish people. 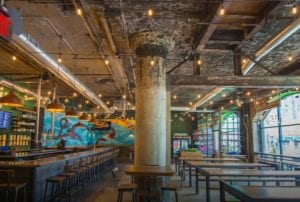 Its newest fixture in the Spring Arts neighbourhood and the industrial style of the building is winning many hearts. It was built in a way to showcase and reflect the artistry and craftsman behind beer and food.

The Roy Pitz owner team – Jess Rotz, Rayn Richards, Collier, and Mike Treon like to call the skill of beer blending and barrel aging as “liquid art”. The Roy Pitz store the barrels for aging in the Spring Garden space in Philadelphia while they are brewed in their Chambersburg Headquarters. 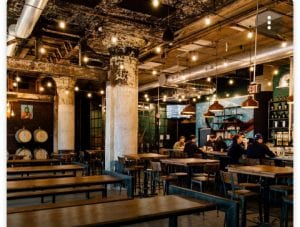 It is a long and airy space surrounded by broad floor to ceiling windows that cast in natural light. Concrete cylindrical pillars support the wide-spaced roof. The walls are decorated with used barrels of different sizes. The interior is decorated by paintings and compositions done by the artist Will Hemsley. 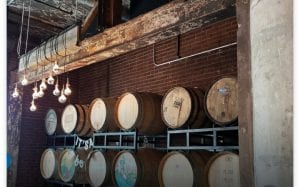 The entire restaurant space features a twenty-three seat bar with a mix of high top and low top tables. The standing capacity and sitting capacity, both are approximately one hundred and fifty. The Liquid Art Space is surrounded by high tops, bar rails, and bar access.

There is an outdoor beer garden with a seating and standing capacity of seventy-five people.

The full working barrel room and bar is a place designed for intimate gatherings secluded by using wooden folders, metal walls, custom glass, and tanks. It is the spot for private dining for a group of guests, for custom beer and food pairings. This lab has a sitting and standing capacity of fifteen people.

The exposed brick walls, tall ceilings trendy painted interior design, and wide-open space have made it a cherished spot for people.

The beers are blended and barrel-aged with different fermentation variations to create extraordinary and original zest. Their goal is to take the powerful characteristics from barrels and blend them with the complexities and delicacies of emerging flavours.

The history of the land dates back to the turn of the century when it was nothing but a farm. Later a couple,  Joseph and Mary Jessup bought the plot and converted the farmland into a farmstead by building the brick farmhouse and the barn. Later the Jessup farm was clubbed with the neighbouring Johnson farm which was later called the Spring Creek Farms. 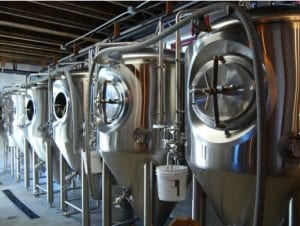 Later in 2011, the new owners decided to renovate the existing structure of the farmstead, preserving its historical integrity into the innovative Jessup Farm Artisan Village. This farm village consists of the Jessup Farm Barrel House (1921)- winery, the Bindle State 1933 Jessup Drive- coffee house, the Lovif Bakery 1939 Jessup Drive – bakery, the Farmhouse in backyard and HEYDAY – retail shop for classic attire and furnishings.

The Barrel House serves a sixteen tap selection of various blends. The beer and whiskey are served flights, pints, and growlers. To ensure proper carbonation and to extend the longevity of beer, counter-pressure growler filler is used to fill the growlers.

The Barrel House focuses on barrel aging and beer blending using the freshly produced farm products from its Farmhouse, producing its original flavoured wines,  whiskeys, and delicious food for an amazing dining experience. 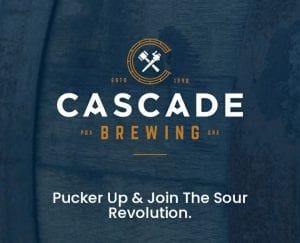 Their menu has beer blends of various flavours starting from fruits, barrel-aged ales, and an amazing array of flavours emanated from Northwestern grown ingredients. They have an amazing list of beers, for example, Vintage, Blackcap, Elderberry, Raspberry, and Gingersnap. The beers are brewed in their original brewery in Southwestern Portland and trucked down to the Barrel House for stocking and aging.

The Cascade Brewing Barrel House building was constructed by renovating a prior produce warehouse in Portland, Oregon. The barrels are stored in the warehouse, which is spread on an area of five thousand feet for the aging process and conditioning of the brewer’s ales.

The rest of the space makes up a small pub for seating of eighty people and outdoor space. There is a barrel room spread on an area of two thousand five hundred square feet area designed for storing sour beers at an appropriate temperature for aging and bacteria cultivars which give these brews their distinct tang.

If you fancy whiskeys, read this article to learn more about – 5 Most Popular Types Of Whiskeys.

There are many more amazing Barrel House breweries like Barrel House Z, Barrel House Tap, Barrel House Pub, etcetera with delightful and original whiskey collections and diners. The services are available in the CoViD period with the maintenance of social distancing and safety norms.

So in this article, we covered up everything the architectures and special features of some famous Barrel Houses. I hope you enjoyed reading it.