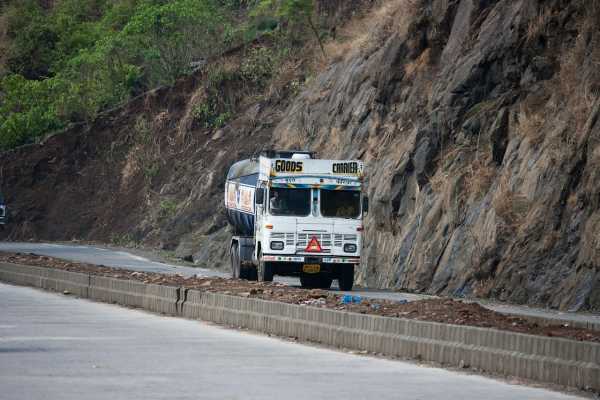 There is so much weirdness and craziness in India that you always come across one thing or the other, wondering how this actually started. And hey, they turn out to be completely meaningful. Have you ever come across the weird, completely grammatically wrong phrase ‘HORN OK PLEASE’ on the heavy Indian vehicles like the trucks and buses? Ever wondered what is the actual significance behind it? Well – there are a lot of theories and stories which explains its significance, and we already covered a few of them in one of our other articles for

Flipping the Pages of History

Well! The whole history stuff behind the phrase dates back to the time when the Indian highways just had single lanes. The phrase HORN OK PLEASE was painted on the back of the heavy vehicles. The word OK had a bulb on it as well. If a vehicle behind the truck or a bus wished to overtake, it’s driver would honk the horns to signal or might be question to know if there was oncoming traffic.

If no such thing was on the way, the driver of the prior vehicle would just light the bulb, signaling you that it was okay to overtake. Also, trucks are not well equipped with side mirrors making it quite difficult for the truck drivers to know about the vehicles at the back. So, here you see, here is how the phrase helped or even helps at some places.

But we now have those multi lane highways and there is least or completely no use of the phrase. But this practice has become a ritual and now you see this phrase on every truck.

Horn OK Please – Let’s Dig a Bit More Into It

Basically, the version of history stated above is considered to be the most authentic fact. But here I am, with more theories that speak a lot about horn honking practice which is sometimes uselessly practiced on the lanes of India.

During the World War II days, trucks were used as haulage for the transportation of kerosene. There was a risk of heavy explosion if the truck got hit by the other vehicles. So, to kind of alert the other vehicles on the road of the heavy risk that the truck carried, the people started painting the phrase OK on the back of the trucks. OK meant ON KEROSENE.

• The Advertisement Stunt by The Tatas

Big people! Big ideas! Well! Money related theory this is! It is said that a new detergent soap OK was introduced by the Tata Oil Mills Subsidiary. The soap’s logo was a lotus flower and you obviously see a lotus with the word OK. To promote and advertise this soap of their very own brand, the Tatas started painting OK on the back of the trucks, since these big people had the near monopoly of having manufactured the first ever Indian trucks. The soap is no more in the market but it seems people started liking the whole lotus OK idea that it has been on the trucks till date. Smart people!

The Other Tales of Horn OK Please

You’ll always find a story or two related to many topics as facts and fiction, both form a part of history. Here are some more talks from the world about this ubiquitous phrase.

It is said that the word OK was actually OTK which meant ‘overtake’. Any driver approaching from behind would read and know that overtaking was okay. But with time they realized that the word paved way for confusion due to the truck’s panel and the world changed to OK, okay?

Let us get back to the grammar portion now. It is also assumed, mind you, that the people who first painted the phrase were kind of English amateurs and completely messed up the whole phrase. But we Indians are darn cool and kept up with the mistake and ignoring it. And yes, OK is often seen as a polite tone in Indian English. So I now wonder if you see the whole connection of the word OK with HORN AND OK.

• Indian drivers are known for their rash driving skills.

The phrase has a link with it as well. The word OK is often seen written separately from the other two words, HORN PLEASE, to kind of alert the drivers at the back that they were all okay and also, it is written in bold, visible letters so that the other vehicles could maintain a safe distance and avoid rash driving.

Indians are known to adopt everything with love. This phrase has also found a place not only on the back of the trucks but also in few more places.
• Are you a Foodie?

If you are a foodie, you might know about Delhi’s most loved food festival, the ‘Horn Ok Please’ food festival. The whole idea behind the name comes from the reason that you got to binge on the food stalls of moms, kebabs and other different cuisines which are on the wheels of the trucks. Last year, it was there in November 2019 and was said to be a hit.

• Horn OK Please is Used as a Movie Title!

The phrase was also used in the complete flop comedy Bollywood movie, ‘Horn Ok Please’ in 2009 starring Muzzabil Ibraham and Nana Patekar. Did you watch the movie?

Some of the claimed theories about Horn OK Please are not proven facts. Know some more intriguing theories about the phrase? Do let us know in the comment section.