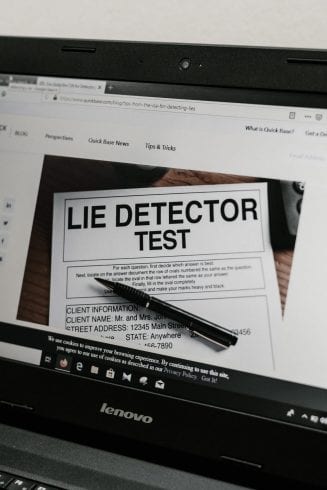 How many times have we seen it in movies — someone gets the merit of his or her words tested over a lie detector test! What should be a matter of science fiction is a really old technology known as the polygraph.

But then comes the immediate question: how do they work? If they do, how much? Indeed, how accurate are polygraph test results? Can a super-liar beat it, or is it omniscient?

Don’t worry, we have got all your questions covered in this article. So let us find out: how accurate are polygraph test results?

A polygraph (or otherwise known as the “Lie Detector Dest”) is a device for the detection of deception by checking physiological indicators like blood pressure, pulse rate, respiration, sweating, etc. The main objective behind a polygraph is that when a person is telling a lie, the body will produce responses that are distinct from other answers.

The polygraph that is known today was not invented in a single day. Instead, it is a mixture of many different machines. The first of them was built way back in 1906 by James Mackenzie — the device could measure pulse rates as line graphs on paper. The Grass Instrument Co. made polygraph machines in the sixties that were much more advanced — but they were made to detect illness, not lies.

How Accurate are Polygraphs Anyway?

There is no single answer to the question, “How accurate are polygraph test results?”. While movies are quick to portray polygraphs as magic wands, that is without any scientific evidence.

The first problem is that there is no scientific backing to the theory that is lying triggers any specific physiological reactions. Therefore, it becomes to difficult to pin the reactions that a polygraph test must monitor to identify lies.

The second problem is that there is no standard marking system that can be used to analyze polygraph results. Instead, individual testers rely on their scoring systems. This form of the non-standard scoring system also makes it hard to justify any polygraph exam.

There is no uniform consensus on the effectiveness of polygraph tests, in 1998 case United States v. Scheffer, the US Supreme Court, tried to analyze the accuracy and validity of polygraph. Proponents say that laboratory studies of polygraph exams using the “control question technique” were very accurate with precision in the region of 87 percent (Abrams, 1989).

On the other hand, opponents say that the accuracy rate of a polygraph exam is “little better than could be achieved by the toss of a coin” (Iacono and Lykken, 1997). According to the American Psychological Association, “Most psychologists agree that there is little evidence that polygraph tests can accurately detect lies.” The National Research Council, in its annual report titled “The Polygraph and Lie Detection,” found the high accuracy claims of polygraph exams to be without scientific validity.

The biggest problem with a polygraph is that while it can measure the physiological responses, it cannot understand or predict the reasons for those reactions. Indeed, a person, when under pressure, may have reactions like racing heartbeat, sweaty hands, or altered breathing, all of which will affect a polygraph test (Bork & Giberti, 2007).

The responses measured by a polygraph can also be triggered by nervousness, anxiety disorders, posttraumatic stress disorder (PTSD), fear, confusion, depression, and so on. Indeed, there is no difference between responses caused by lying and responses caused by other things.

How Does a Polygraph Test Take Place?

When answering the question “How accurate are polygraph test results?” it is important to understand how the process takes place.

There are two testing procedures of conducting a polygraph exam — the extremely common Control Question Technique (CQT), and the Guilty Knowledge Test (GKT).

The problem with this form of polygraph exams is that there is a big scope for false positives. Innocent people may be equally (or even more) nervous than the guilty ones. The interrogation style of the exams triggers anxiety in both the guilty and the innocent.

The GKT (or the Concealed Information Test) is used in Japan. The polygraph examiner has no knowledge of the subject or the crime or incident in question. The tester asks about information regarding the crime that would not be known to innocent people.

All the questions are multiple-choice questions. The subject is monitored for his reaction when the correct answer is given. It is believed that the guilty ones will react differently to the “correct” answer.

Where are Polygraph Tests Used?

Now that you have a vague answer to the question “How accurate are polygraph test results?” let us find out where they are used.

The biggest users of the polygraph are law enforcement agencies in the US. According to a 2018 report, an estimated 2.5 million polygraph tests are annually administered in the US.

Most of them for job screenings by government agencies and legal cases. Although the Employee Polygraph Protection Act of 1998 prevents employers from using polygraph tests at any time, there are some exceptions. Indeed, as many as 70,000 American federal government job applications require a polygraph test for employment screening.

The US Supreme Court, in its 1998 United States v. Scheffer ruling gave the individual jurisdictions the autonomy to decide whether polygraph results were admissible evidence in court.

In India, the first time polygraph was used as admissible court evidence was in 2008. However, The Supreme Court of India ruled in 2010 that all kinds of polygraph tests were illegal unless consented for by the subject. They are, however, legal if the subject asks for one.

You asked, “How accurate are polygraph test results?” and we gave you the answer! However, if you want to read more, click below

NSA Whistleblower Reveals How To Beat a Polygraph Test

15 Things To Know About A Lie Detector Test