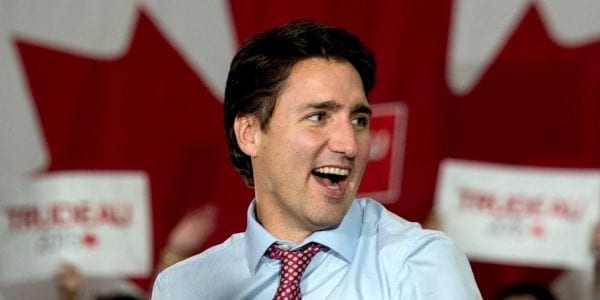 Canadian Liberal Party leader Justin Trudeau arrives at a victory rally in Ottawa on October 20, 2015. Canada is "back" on the world stage, newly-elected prime minister Justin Trudeau said Tuesday after a landslide victory that ended nearly a decade of conservative rule. "I want to say to this country's friends all around the world, many of you have worried that Canada has lost its compassionate and constructive voice in the world over the past 10 years," Trudeau told a rally. "On behalf of 35 million Canadians, we're back" AFP PHOTO/NICHOLAS KAMM (Photo credit should read NICHOLAS KAMM/AFP/Getty Images)
SHARE

Canada’s new Prime Minister Justin Trudeau has set a new example for the world political scenario. He has, for the first time in history set up a young and ethnically diverse cabinet which has equal number of men and women in it. The ministers-15 men and 15 women, all under the age of 50, make up the Canadian cabinet. It is an example of a generation change and is also a reflection of Canada’s diversity. “It’s important to be here before you today to present to Canada a cabinet that looks like Canada,”– this is what the 43 year old told the reporters soon after he officially became the 23rd Prime Minister of Canada. The second youngest Prime Minister in history, when asked to explain his gender parity replied –“Because it’s 2015.” Many of the rising female ministers have been given important roles in Trudeau’s cabinet.  Former journalist Chrystia Freeland has been given the charge of international trade and  Maryam Monsef, who had fled from Afganisthan 20 years ago, will look after the the democratic reform portfolio. Trudeau’s cabinet also consists of two aboriginal members and also three Sikh politicians. The Prime Minister has also included some of the old members of the Parliament. Party leader Stéphane Dion has been involved in foreign affairs and his closest adviser, MP Dominic LeBlanc has been made the government leader of the House of the Commons. Trudeau is the son of Pierre Elliott Trudeau, who was the longest serving Prime Minister of Canada. But he said that his thoughts weren’t on his dad’s legacy during his swearing on Wednesday. “My thoughts today – sorry Dad – aren’t mostly on him, they’re very much on my own kids and the kids across this country that we are going to work very, very hard for to ensure they have a better future.”

Trudeau has been a liberalist since 2008 and has led the centrist Liberals to a great victory in October’s federal election. He has been given some opportunity to reform former records,  like the amendment of controversial anti-terror legislation and pull off the Canadian forces out of the US led coalition against Islamic state. Trudeau has promised that his cabinet members will get independence in their work and has assured that the Canadian government will be much more open and transparent.

After the swearing in, Justin Trudeau greeted the crowd of people who had gathered in the driveway of the governor general’s official residence and took selfies with them. During the ceremony he was cheered by the crowd for his selection of some of his cabinet ministers.  This young new Prime Minister brings with him some new hopes and ambitions for his country. It is hoped that this adorable combination of cuteness, intelligence and dedication will be a revolution for Canada, and an inspiration for the young generation of this world.