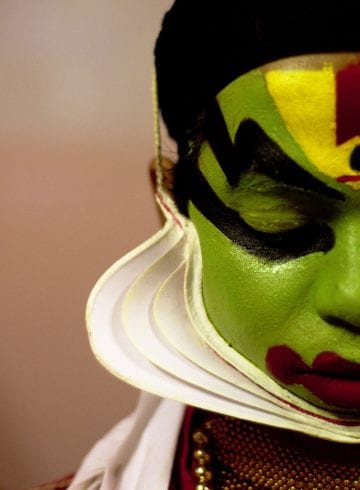 Staring right into the deep crevices that further marred the already tawny, dilapidated roof and walls surrounding him, he lies hysterically on the floor, with an unflinching eye but an exhausted heart. “It’s over. This is the end”, he reminds himself “and now I am like these walls — old, torn apart and blank with life slowly ebbing away.” “His Life, his Love, his passionate counterpart”. The one thing that has kept him alive all these years, kathakali.

It would be demeaning to call it a ‘Thing.’ Kathakali is not a ‘Thing’, and it is definitely not a ‘thing‘ for Him. It is his mystical world, a pathway to the metaphysical and the spiritual, a revered art form, and his profession for the last 30 years, and today, it has all come to a standstill, a perpetual pause.

It is his last dance as a Kathakali artist. An eternal farewell to the stage and audience that have lauded him for years.

As the thick layers of makeup get brushed across his face by the Chouttikkaran, and the hues of green and red gleam brightly from his cheeks denoting his Kathi Vesham for the last dance, tears well up in his eyes, whispering to him that this is his last Chamayam. Red, Green, White, and Black form his rainbow.

He would certainly miss it all-the smell of the vermillion, the soot, and Chutti that have painted his face for decades, the red, black, and white beard, his roles in the demonic Kari, the Sathvik Pachaa, and the challenging feminine Minukku – they all will be mere memorable tales to be passed on, by the break of the dawn.

The man is disappointed, shattered like a million little pieces of glass. He closes his eyes to hide his feelings, to wear a brave face—his mind journeys through the hurdle of the yet glorious path that he has traversed over the years.

As a young boy, he had entered this field, following his ancestors’ footsteps, unaware of the tools that lay ahead. It was not a cakewalk at the beginning. Intense training based on Kalaripayittu and attaining the 24 controlled mudras and Rasas as per Natyashastra demanded immense stamina and concentration.

The staging of Nalacharitha, Duryodhana Vadham, and Kalyana Sougandhikam, the Carnatic and Sopanam music, and the huge throng of crowds in the temples became a part of his daily routine wherein he discovered his passion and solace …. And all through the years, the words of his master reverberated in his ears – “We dance for laughter, we dance for tears, we dance for madness, we dance for fears, we dance for hopes, sometimes we lead, sometimes we follow. we are the dancers, and we create the dreams…”

In a faraway corner, new life brews in a young painter. He dips his varied brushes in the little cans of dyes close to the canvas and starts his masterpiece — the portrait of a Kathakali dancer. He had been eager to find the right one, to present something exotic, unknown to his culture. Traveling back and forth, he had finally discovered the essence, and now he sits there, on the edge of his three-legged chair, working on his magnum opus.

With the eyes of a hawk, he starts meticulously from the top, slowly trailing down to the striking Chamayam. As time ticks, he becomes keener and more observant, feeling a sense of fulfillment that has been concealed from him for years. He knows this would be a turning point, something that would elevate him from the position of an apprentice—his first big hit.

Each stroke of the brush by the artist is like a knife through the heart of the dancer. For he has danced, it is over, and the last dance has been done.

As he wears off the makeup, slowly removing the colors, taking time, for he wants to savor every minute of it, the painter progresses with his work, rendering life to the canvas, painting the dance pose. He strikes the chord with the right color and expression and slowly establishes the equilibrium. The balance where the dancer has taken off his mask, the Chamayam. It is no more on his face. However, the painter is elated, and his work is complete. The last dance has been caught in the canvas.