As the leaves begin to turn brown and an icy chill hits the shifting breeze, there are only two words on everyone’s lips – sweater weather! There truly is nothing better than wrapping up in warm, woolen winter wear (maybe, knitting vs crochet).

The velvety threads of yarn hugging your body are always a welcome relief on a chilly evening. Making your own fleecy wraps is an even more enjoyable experience – who would not like to wear a custom garment, perfect skill, and discover a new hobby at the same time? 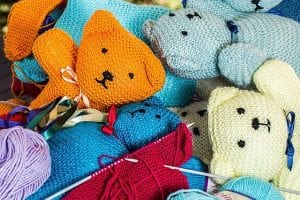 With the arrival of the colder months, every designer and hobbyist has a choice to make; should they pick up the knitting needles or the crochet hook this season? The debate of Knitting vs crochet is as old as time. To help you decide which craft to continue refining, keep on reading ‘Knitting Vs Crochet: the Absolute Tough Debate‘

What Is Knitting Vs Crochet? 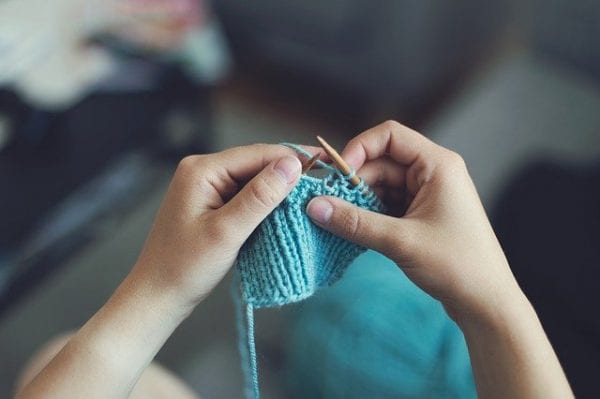 Knitting is one of the oldest methods of creating clothes known to mankind. Knitted artifacts have been found in sites across Egypt that have been dated to the fifth century (AD)!

Knitting is the art of manipulating yarn (or cotton threads in some cases) to create a cohesive garment. Knitting is fairly simple and requires just two needles and a bit of practice to get the hang of it. A knitted garment essentially consists of loops of yarn that are woven together so that they do not unravel.

The way this is achieved is that the knitter threads one set of loops onto one needle and a parallel set of loops onto the second needle. Then, the knitter interlinks the two sets of loops together using the points of the needles. This way, each loop is securing the loops that are suspended from it, and the yarn comes together as a cohesive garment. 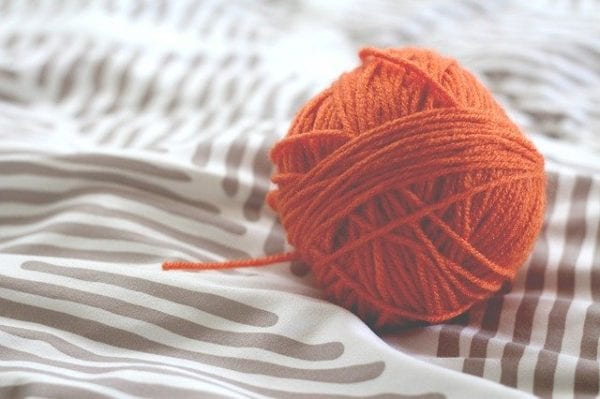 Crochet is comparatively a much newer craft. The oldest known records of crochet garments come from the 1800s, where the technique was used primarily for lace making. Full crochet garments were a fairly recent development in the art of crochet. So when we compare Knitting vs crochet, we should keep in mind that Knitting has been a legitimate technique of clothes making for a much longer period than crochet.

Crochet is also a yarn or cotton thread manipulating technique like Knitting. Unlike Knitting, however, crochet uses just one hook rather than two bulky needles. This style of clothesmaking is achieved by looping thread or yarn over itself using the crochet hook. The crocheter eventually creates a lacey, woven pattern using this single hook looping technique.

Crocheted garments are not nearly as tightly woven as knitted garments, and so it is not hard to see why, for most of its history, crochet was used to make frilly and decorative additions to pre-existing garments and not to make the garments themselves.

Knitting vs Crochet in Fashion 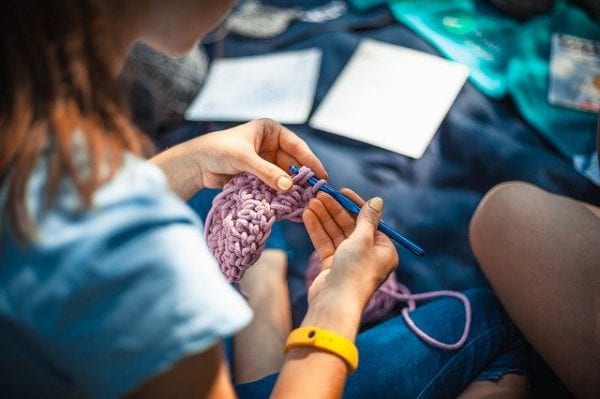 Wool and yarn have been used in haute couture for decades. This means that knitting and crochet have made their way onto runways and red carpets alike. Designers all the way up from Alexander McQueen down to Calvin Klein have used crochet or knit in their designs.

Let us take a look at some iconic celebrity knit and crochet garments over the ages. 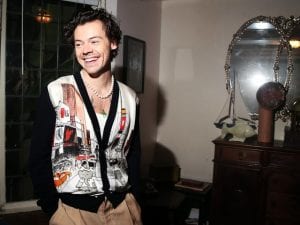 Harry Styles has become something of a style icon in this decade. The singer-songwriter has become famous for his signature 60s and 70s sound and fashion. Knitting and crochet pop up a considerable number of times in his wardrobe, partly due to his association with the high fashion brand Gucci.

Some notable pieces from Styles’ collection include the crochet top he wears in the music video for his summer hit ‘Watermelon Sugar‘ and the various Gucci knitted items he has been photographed wearing in and around the streets of London, New York, and Tokyo. 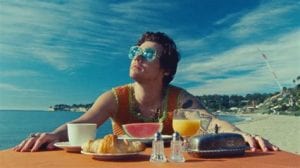 One of the Styles’ iconic pieces is the oversized J.W Anderson cardigan that has sparked a viral Tik Tok trend where people attempted to recreate the cardigan themselves. The trend was used to share handmade knitting patterns and popularised knitting amongst the younger generation.

J.W Anderson appreciated the attention so much that they actually published a free pattern of the cardigan so you can live your Harry Styles retro-glam fantasy at home! 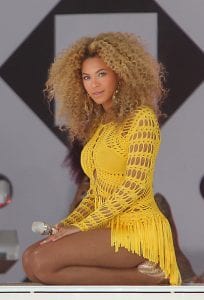 Queen B is no stranger to the world of crocheted fashion. From her unforgettable lilac crochet dress in the early 2000s to her identical black and yellow performance ensembles in 2011, Beyonce does crochet well!

Her twin looks from her Good Morning America performance prove why Beyonce is the Queen of fashion. The juxtaposition of the delicate crochet and bold, neon colors is legendary. Her performance even kickstarted a fashion trend of heavily weighted yarn being used for crochet. 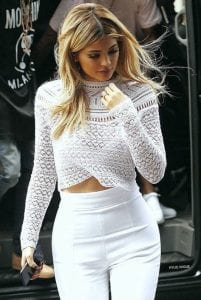 The Kardashian Jenner family has dominated Hollywood for years. The dynasty is known for its unforgettable fashion moments, and this family has worn their fair share of knitwear and crochet designs both on the runway and the high streets.

Kim Kardashian is known for her body-hugging knit dresses that show off all her curves. Kylie has been known to wear the occasional knit dress but generally speaking, the younger Jenners – Kendall, and Kylie- tend to prefer the trendy crochet styles.

Knitting vs Crochet – Which Is Better?

Now, that we know all that there is to know about knitting vs crochet let us look at which one is actually better.

One of the main factors that divide the consensus in knitting vs crochet is the difficulty level. Generally, most people can agree that crochet is easier than knitting. 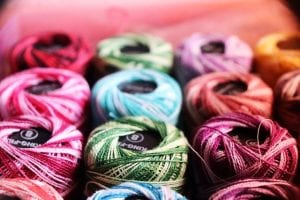 There are a few reasons why this is the case. The first reason is that there is only one hook to keep track of. Knitters have to have both hands keeping track of two sets of loops, whereas crocheters just have to keep track of one. 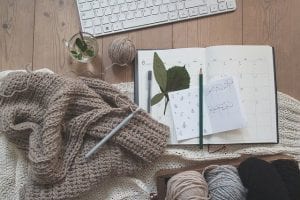 Lastly, knitting is much more precise than crochet. There is a considerable amount of math involved in knitting vs crochet because you have to keep track of the number of stitches you have to add and subtract in order to get the right size and shape. In crochet, on the other hand, you can be a lot more freeform and can generally ‘eyeball’ most of the measurements.

Both crafts require intense hand-eye coordination and are in no way easy. However, In terms of difficulty, crochet wins the Knitting vs crochet debate as the simplest technique to learn. If you are deciding whether to learn how to knit or learn to crochet, definitely go for crochet! 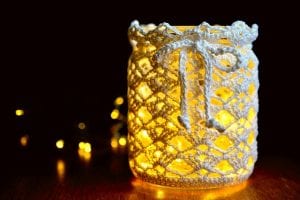 Another very important element to consider in the knitting vs crochet debate is the visual appeal of the two styles of craft. Knitting produces tightly wound garments that have a uniform look to them. There are much fewer holes in knitting vs crochet due to the precision of the technique.

However,  the looser crochet stitches allow for more variation so you can create various patterns and shapes suspended in yarn like a beautiful tapestry. Crochet is lacy, dainty, and elegant, whereas knitting is quite uniform and structures.

Although, if you are skilled enough at knitting, it is possible to create shapes, scenes, and even full portraits within the knitted garment. Knitted art has been around for centuries and can be as simple as a red heart on a white sweater, or as complex as a full landscape picture of Eden on a shawl! The aesthetic appeal of knitting vs crochet comes down to personal preference and technical ability. 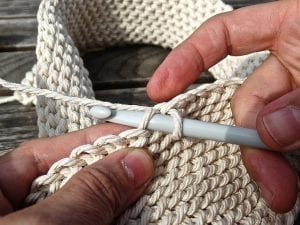 One question people often ask during the knitting vs crochet debate is which one is more durable? If you are a hobbyist, this question is extremely important because you don’t want your handiwork (which took your blood, sweat, and tears to make) to fall apart with the slightest amount of wear and tear!

It is also an essential consideration when gifting a woolen garment. After all, you would not want that expensive Christmas sweater you gifted to fall apart and look cheap! A shabby gift is a social no-no.

Usually, knitwear is more durable than crochet. The loose stitches of crocheted clothing often make it susceptible to snagging and getting caught on various bits of furniture while knit stitches are durable. This makes crochet last a much shorter amount of time.

The issue with wool and yarn clothing is that it tends to fray and frizz. The strands of yarn tend to unravel at the seams, so no matter how tight your stitches are, you are bound to have some fraying. That being said, because a knitted garment uses more yarn per square inch, it can appear as if the garment is fuzzier than a crocheted garment of the same size (even though they both have exactly the same level of frizz as each other).

This does not matter. Of course, if you do not mind the fraying; A fuzzy piece of winterwear can give you a cozy and warm look. 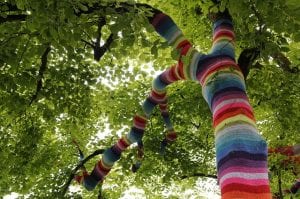 Versatility is a useful measurement to consider while deliberating which skill to learn. Knitting is an important life skill, and everyone should endeavor to try it at least once in their lives. However, knitting is not a very versatile craft. Knitted fabrics tend to have the same look to them, and the only creativity comes from what knitting patterns you use (or come up with).

Crochet, on the other hand, allows for much more freedom. You can even combine different crochet styles on the same panel and have a garment for different crochet projects that is one of a kind. Furthermore, Knitting is only really done with yarn, whereas you can use thread, yarn, or any other string to crochet with to give you whatever kind of garment you want.

You can create lace, fringe, dressed, tops, skirts, shorts, and much more using just a single crochet hook and your imagination.

Knitted projects are only given or knitted garments are only really found in fall or winter because they are made of thick woolen yarn that would roast a person alive if worn in the summer. Crochet can be made with anything so you will be able to find crochet clothing in stores year-round.

Not to mention, the light and breezy design of some crocheted clothing actually make it ideal for hotter climates! Crochet is definitely the most versatile of the two crafts.

Knitting vs Crochet – What Have We Learned?

Ultimately, the debate between knitting vs crochet comes down to personal preference. There are some factors we can measure, but when the craft is so creative, how can there ever be an objective answer to the question ‘which is better?’

On the surface, it may seem like crochet wins this contest; the technique produces versatile, imaginative, and beautiful clothing with the very little difficulty involved. This may seem like the go-to craft, but in reality, there are several things one has to keep in mind while creating a garment. 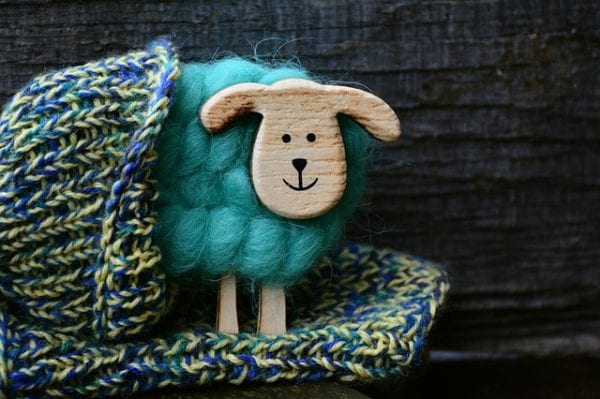 The general, overarching conclusion amongst hobbyists and fashion designers is that knitting is for utility (warm, plain panels of fabric), and crochet is for fashion. If you are looking to make a warm sweater that will last you a good few seasons, then Knitting should be your go-to choice. If you are trying to make a Boho, summery, designer top, then obviously crochet will work better for you.

As with every rule, however, there will be exceptions. Still, it all depends on your own fabric and design goals.

Both these crafts have their own benefits and drawbacks. You would not go wrong with learning any one of these brilliant skills. Knitting vs crochet is really a superficial debate and just learning a new skill is an achievement in and of itself.

Both crafts will teach you patience, precision, and help elevate your artistic visions. Who knows, this Knitting and crochet may become a new hobby for you!

In reality, Knitting vs crochet doesn’t matter so long as you are having fun!