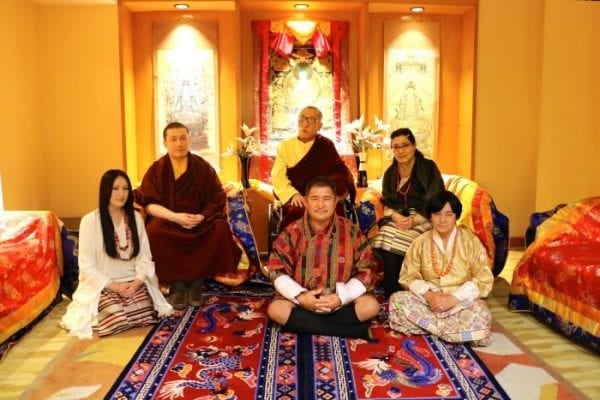 J.K. Rowling, in one of her worldwide famous books, rightly wrote, “Love is the strongest power there is”, and Karmapa Thaye Dorje, who abandoned his monkhood to get married to his childhood friend is the most recent example. Now, we have a monk marrying his childhood friend!

We live in an era of skepticism, where love is a long lost idea; being indifferent and not caring at all is ‘cooler’, and wanting to love and be loved in return makes you a ‘desperate loser’. But once in a blue moon, amid our daily cynical lives, we come across stories that somehow make us stop and wonder, “Wow! It really does exist, doesn’t it? Love!” Yes, it is one of those stories, A Karmapa giving up his monkhood to be able to raise a family with the one he loves. Trinley Thaye Dorje, 33- years- old senior Tibetan lama, married his childhood friend, 36-years-old, Rinchen Yangzom in a very low profile ceremony attended only by close family members and friends in Capital of the country, New Delhi on 25th March 2017. Thaye Dorje Proposed her with prior permission of her father, and according to the traditions of Tibet on January 19, 2017.The couple is a close childhood friend, who has been acquainted with each other for more than 19 years. They plan to spend the 15 days following the day of their wedding with their extended families as the period is considered to be sacred. Trinley Thaye Dorje, leader of the Karma Kagyu, one of the four major Schools of Tibetan Buddhism and one of the claimants to the ‘Karmapa Lama’ title, became the 17th Karmapa of the Karma Kagyu at the age of 11 in March 1994. He was born in Tibet; He asserted since childhood (when he was one and a half years old) to believed he was the transmigration of the Karmapa Lama, the commander of one of the four chief schools of Tibetan Buddhism. He moved from Tibet to Nepal and then to India where he was formally recognized as the 17th Karmapa, Whereas Rinchen Yangzom (wife of the lineage lama), was born in Thimpu, The Capital of Bhutan, and received her education in India and Europe. On Thursday, Trinley Thaye Dorje’s office made a surprise announcement, which literally surprised the whole world, That the Tibetan Lama got married to his very close friend of more than 19 years and plans to raise a family, the office also said that Thaye Dorje will no longer continue to be monk but will persevere as the lineage lama and the office emphasized that Dorje is a Karmapa from birth  and will  continue to fulfill his obligations as the Karmapa, which includes offering blessings and teachings to students and followers from all around the world. He will hold meditation sessions and continue his travels.