Musings on the growing commercialization of the news media, and the effect it has on society at large.

Of politics, the horrific snapshots

Of puffy faces and red-rimmed eyes

Glaring at an unseen opponent,

Grace the screen, till the clock strikes three

Of blood and death, tales then begin.

Of drone attacks that innocents maim,

Of terror strikes that children claimed.

And when the carnage is complete,

Time to sway your hips to the beats

Of the latest of Mika and Taylor Swift;

As sordid images flash away

Of sex scandals and wardrobe malfunctions

That the TRPs sway.

Of the latest photo ops

Of the Kings of Jazz and the Queens of Pop,

We learn all aspects in great detail,

All packed and prettied for retail.

And then when all is said and done,

They show us how to bake a bun

In their latest solar cooker,

That sells for less than a Cheapside hooker.

And with a whole day’s news complete,

We go for a smoke, in worldly knowledge replete.

9 Fail Proof What to Wear to A Club Outfits: For Men and Women 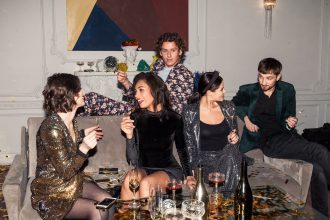 9 Fail Proof What to Wear to A Club Outfits: For Men and Women