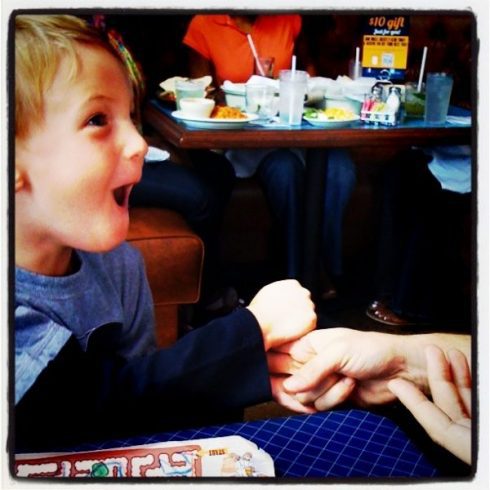 We’ve all played the children’s hand game called “Rock Paper Scissors,” whether it was to settle stalemates, decide on who gets the window seat, or simply for the heck of it. I remember having played it, religiously, at school as the (ungrammatical) “Stone Paper Scissor . . .”  One of those few games that people worldwide have played at some point in their lives.

One requires no muscle or mettle for it. The chances of winning depend solely upon— well— chance. The rules are quite simple too. But is it really that simple?

You would be surprised to learn that this so-called child’s game has now become a full-fledged sport! Read on below to know more about the origins and the state-of-the-art of rock paper scissors. 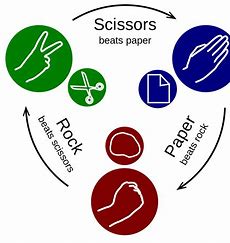 The players usually count aloud to three or say the name of the game— “Rock! Paper! Scissors!” They then “throw” or extend their hands, which were behind their backs, towards their opponent.

Variations overthrowing may be present in various game formats, but the rules remain homogenous- A beats B, B beats C, and C beats A.

Here, rock blunts or breaks scissors, scissors cuts paper, paper covers, or smothers rock. If the ‘weapons’ are the same, the game comes to a tie and is followed by another round.

We can offer up our hands in one of the three ways— rock (clenched fist), paper (an open hand), and finally scissors (the peace sign; the index and middle finger forming a V-sign).Supposedly, what one tends to choose amongst the three speaks a lot about their personality. Rock is said to signify intimidation. It is preferred by beginners and players who have been cornered. It is also the most predictable and sometimes the safest option.

On the other hand, the paper is considered the choice of the intellectual, the passive-aggressive, the least used sign. It has connotations of unsafe territory to venture into. Lastly, scissors are the controlling, devious tools of malice, outrightly, and unapologetically aggressive.

Some even suggest that gender has a role to play in our choices between rock paper scissors. An expert claims that women tend to open with scissors.

For all the above denotations and connotations, rock paper scissors are a fun little game that often helps break the ice in social gatherings, office teams, and fresher students.

Don’t have anyone to play it with or simply want to play solo? Don’t fret. The internet has that covered too. One can play this game online.

Rock Paper Scissors: You vs. the Computer 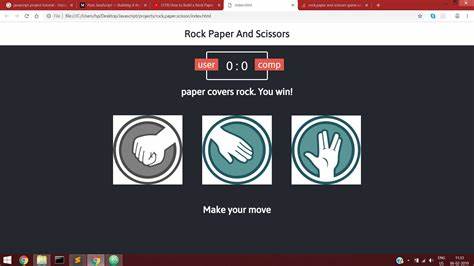 Unlike humans, computers do not function randomly. Come to think of it; even humans rely on their reasoning. Similarly, computers build on simple rules of probability and statistics.

In the rock paper scissors game vs. the computer, it is our strategy vs. computer AI or Artificial Intelligence. One can choose two different modes from, namely— ‘Novice’ or ‘Veteran.’ Such levels of play are present in various computer games. So, what do the levels signify?

Having so many online game experiences, while the computer cannot win all rounds, over time, it can exploit a player’s tendencies and patterns to gain an advantage over its opponent using an Algorithm. After all, we humans are predictable.

Even if we try to play as randomly as possible, we still fall into subconscious patterns. Ergo, a player should feign randomness. But what happens when a player, too, has played several times?

Like a Markov chain, each event’s probability depends only on the state attained in the previous event. One can also use ‘game theory’ to answer the above question. If we were to go by it, the conclusion drawn would be that any rational player plays rock paper scissors with equal probability after an infinite number of games.

One tends to keep one’s strategy unchanged if the opponent also does the same. This is known in Economics and Game Theory as a stable state of a system involving the interaction of different participants, in which, no participant can gain by a unilateral change of strategy if the strategies of the others remain unchanged or Nash Equilibrium.

A highly effective strategy in game theory is tit for tat. It has originated from the phrase “tip for tap,” reported having been used in 1558 for the first time. It means “equal retaliation.”

One must refrain from committing the ‘’Gambler’s Fallacy,” which is the erroneous belief that if a particular vent occurs more than frequently than usual during the past, it is less likely to happen in the future. The probability of any event occurring in rock paper scissors is 1/3 each time anew, and the probability of such events does not depend on what has happened in the past. The fallacy is related to the rolling of dices in gambling.

Another strategy is playing the game so fast that your opponent doesn’t have time to think and falls into errors or a predictable strategy that can be easily beaten. It is known as “priming the chump.”

Conversely, there are strategies about priming so slowly, so that, a frustrated opponent declares their throw earlier than you. Yes, none of us want to be cheaters, but technically this isn’t ‘cheating’ per say. By hook or by crook, this is very well within the game’s understood and accepted rules.

Another boon for anti-socials who love the game was when in 2012, researchers from the Ishikawa Watanabe Laboratory at the University of Tokyo built a robot hand that can play rock paper scissors! Unlike the computer, this robot has a 100%-win rate against a human opponent.

That would be quite difficult to digest, if we did not know that the robot uses a high-speed camera that recognizes within a millisecond which shape the human hand is making, then produces the corresponding winning shape— much of cheating?

Not only inanimate robots, but the craze for the game is also such in Japan that researchers have even taught chimpanzees the rules of rock paper scissors.

What’s more, a book called Official Strategy Guide to Rock Paper Scissors by Douglas and Graham Walker is readily available in print and electronic at Amazon.

Some would say, why take the child’s game so seriously? A player would always have to be open to lampooning by the uninitiated in the league. Although the tone of the game being light and fun, players do not engage in aggressive retaliation.

Would it now come as a surprise if one were to say that it has been used to help solve disputes at official levels?

Ever heard of the American court case where an exasperated judge resorted to this child’s game? Yes, you read that right.

It was in 2006 that Gregory Presnell, an American federal judge, had to settle a case where the appropriate place for deposition was being debated between the parties Avista Management vs. Wausau Underwriters in Florida. The case was trivial compared to the discursive debate that was prolonging it. Our federal judge asked the case to settle the dispute thus:

“Upon consideration of the Motion – the latest in a series of Gordian knots that the parties have been unable to untangle without enlisting the assistance of the federal courts – it is ORDERED that said Motion is DENIED. Instead, the Court will fashion a new form of alternative dispute resolution, to wit: at 4:00 P.M. on Friday, June 30, 2006, counsel shall convene at a neutral site agreeable to both parties.

If counsel cannot agree on a neutral site, they shall meet on the front steps of the Sam M. Gibbons U.S. Courthouse, 801 North Florida Ave., Tampa, Florida 33602. Each lawyer shall be entitled to be accompanied by one paralegal who shall act as an attendant and witness.

At that time and location, counsel shall engage in one (1) game of “rock, paper, scissors.” The winner of this engagement shall be entitled to select the location for the 30(b)(6) deposition to be held somewhere in Hillsborough County during the period 11–12 July 2006.”

An instance of the game being deliberately used was by a referee during the 2018 FA Women’s Super League. For the pregame coin toss, instead of coins, the referee captains playing rock paper scissors to determine which team would kick-off.

Although the referee pleaded not having a coin at the moment, of course, what followed was a three-week suspension by The Football Association. Not having a coin proved quite expensive. 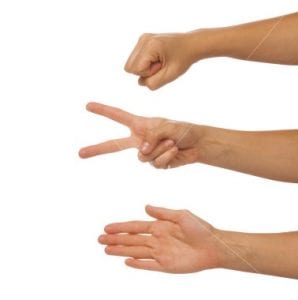 Earlier, in 2005, one of the most expensive rock paper scissors games was played in Japan. The CEO of Maspro Denkoh Corporation— an electronics company based outside of Nagoya, Japan— Takashi Hashiyama, could not decide which between the two leading auction houses of Christie’s or Sotheby’s should sell his corporation’s collection of Impressionist paintings at the New York auction in a week. Initially, he sought proposals on how Christie’s International and Southeby’s Holdings planned to bring the collection to the market and maximize profits from the auction.

He found both companies to be equally good, therefore, advised the two firms to play a game of rock paper scissors. He said, “It probably looks strange to others, but I believe this is the best way to decide between two things which are equally good.”

Now, Nicholas Maclean, the director of Christie’s Impressionist and modern art department who was at a loss for words consulted the experts, here his 11-year-old twins, Flora and Alice. After all, they had the experience and expertise of playing the game at school “practically every day.”

Alice said, “Everybody knows you always start with scissors as the rock is way too obvious, and scissors beat paper.” Flora quipped in- “Since they were beginners, scissors were definitely the safest,” adding that if it came to a draw, i.e., the other side also chose scissors, it would be wise to stick to scissors in the second round as well.

The reason for it was, as Alice explained, “Everybody expects you to choose rock.” Sotheby’s decided to have no strategy since it was a game of chance. It was Christie’s that won the game.

So yes, paintings of Paul Cézanne, Pablo Picasso, and Vincent Van Gogh worth more than $20 million were sold off over a game of rock paper scissors. Chew on that.

In a telephone interview, Mr. Hashiyama said, “I sometimes use such methods when I cannot make a decision.” In fact, in Japan, resorting to such games of chance is not unusual. After all, the famous hand game originated in its neighbor country- China. 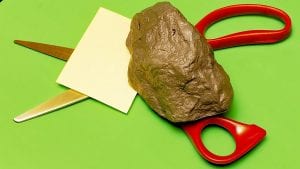 The history of the game is ancient, and China is its country of origin. Thereafter, it was transported to Japan and became popular there. The first written mention of the game was in the book Wuzazu by the 16th-century Chinese Ming-dynasty writer Xie Zhaozhi. In his book, he mentions that the game called “shoushiling, huozhitou, or huaquan” dates back to the Chinese Han Dynasty of 200 BCE.

Later, throughout Japanese history, there is frequent apriorism to ‘ken’ (fist) game of “sansukumi-ken” where “the three who are afraid of one another.”

So, we saw how rock paper scissors are used not only to break the ice but also to break and end squabbles. Use in real-life scenarios can range widely. With a little bit of effort, you and not your sibling will get the window seat each time — and the last piece of pizza will always be yours!