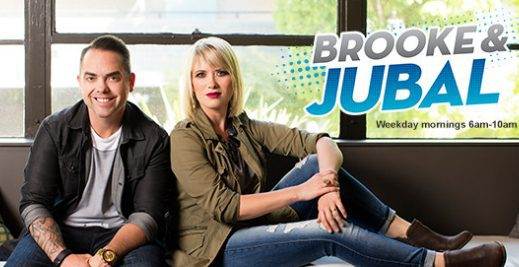 Brooke and Jubal, Marconi award-winning program owned by Hubbard Radio of Seattle’s Movin 92.5, has a place in the hearts of most residents of Seattle. Do you want to know more about not only Brooke and Jubal but the rest of the cast members of the favorite morning radio show of Seattle? Brooke and Jubal aired for the first time in 2011, and nine years later, it still cracks up people.

Brooke and Jubal entertain Chicago residents from 5.30 to 9 am every day. Hubbard radio and premiere networks syndicate Brooke and Jubal to more than 50 networks, as of April 2020. The flagship station of the show is KQMV (Movin’92.5) and distributed by Premier networks. The show made its debut on “Movin 92.5”. And now it is one of the most loved and appreciated syndicated shows of Seattle.

With the clever sense of humor of Brooke and Jubal and the rest of the cast, we surely forgot to count the years. How has the show evolved, and what are the stories of the people behind it? How does it still deliver such infectious positivity and laughter every day, one after the other? What are the changes listeners can expect? What makes Brooke and Jubal so funny through all these years? Keep reading to find these answers.

Since 2011, the mornings of Seattle and many radio listeners around the world have not been the same, and a major part of the reason for it is Brooke and Jubal. You are rushing for your office and worried about the work you haven’t got done, and life seems as if it is stuck in one place, but then you switch on the radio, and there is a guy who is prank calling and making people laugh. You laugh your stomach out, impressed by his clever sense of humor, and it all falls into place. At Least it seems like it.

So Who All Are Behind The Scenes?

How Has the Morning Show Been Funny Over the Years?

Every listener was a bit confused when the people’s favorite, Jubal Fresh, disappeared from the show. Listeners have been trying to figure out where Jubal is for more than half a year now. The news was made official earlier this year on April 20. Brooke and Jubal are now rebranded as Brooke and Jeffrey. The new show comes into the market with a lot of expectations and hopes.

The new show will attempt to explore the various trends of Pop culture. Teenagers and pop lovers of all age groups are looking forward to what all the show is willing to offer after this. The thrill and excitement of the new show can be seen even in the Hubbard studio. The Market Manager, Jeff, has made a statement revealing how excited the whole team is about the show. He also promised to provide outstanding and engaging entertainment.

Here is an excerpt from the show, where the topic of the conversation is icecreams. If you haven’t had the chance to know Brooke and Jeffrey, and Jose till now, you will definitely reach out to this highly treatable content after reading the excerpt.

Jeffrey- You know what, in times like this, when you are feeling blue, you grab a spoon and go for that ice cream.

Jeffrey- Doesn’t matter, It is the one thing that is always there for you no matter what.

Fox- Oh my god, yes, we have two gallons in our freezer right now. Cookies and cream and strawberry.

Jose- Dude, invite me! What is up!

Jeffrey- We all have that one. It is close to our hearts; it is there for us in our time of need. I don’t think I have to say anymore because that is what I am going to be singing about. Icecream!

When I feel sad and lost,

Both of my lips are glossed.

With her, she is chocolate sauce.

I try to save her, each and every bite.

But two seconds later, I finished off the point.

Grab a spoon down a rocky-road

Feeling french with my pies-al-Amor

Frozen treats give my tummy a tickle.

Lick away, lick away

As you saw, Jeffrey’s parody had a clever sense of humor that made us all laugh even when it was about a supremely common thing. This is what the show aims to do. Make you laugh!

The show started to firm its ground in the market of various other radio shows that use Prank calls. Those prank calls were never meant to demean a person or their values. Many old listeners know for a fact that most of these calls were fake and recorded in the studio. But with changing times, the library of content grew in the show.

All the cast members of the show collectively contribute to the humor with their different segments. Each member has a sense of individuality that sets them apart. The clever listeners really appreciate this. In the course of the nine years, the show has earned the honest and consistent support of listeners. This audience has stuck with the show through various ups and downs.

It can be safely said that the reason this audience has stuck with the show through all these years is the earnest effort to provide quality content without moving away from the original genre of the show. In most ways, the show is still the same as it was in the year 2011.

Brooke and Jubal have won many appreciations and awards for being the most loved morning show. The show gives listeners a hearty laugh with its various new segments performed by different cast members. More than that, what holds the listeners close to the show is far more than those waves of laughter.

The inspiring stories of these celebrities make the audience’s attraction stick to the show. The connection established between the audience and cast members is exceptional. Brooke and Jeffrey are living up to the expectations so far with all the new content library.