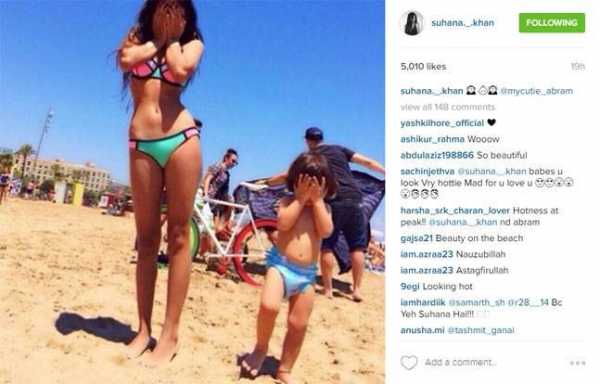 Shahrukh Khan’s children Aryan, Suhana and Abram are among a few of the most famous star kids on the block. With Aryan already charming many and becoming the next famous thing on social media sites like Instagram, his siblings have followed in his footsteps too. Suhana recently joined Instagram and has in the short span of time gained many followers as well as admirers. Recently, she put up a picture with her younger brother Abram at the beach where she is seen to be posing in a bikini. A few media sites found it and made the photograph go viral with headlines like,” SRK’s daughter flaunts her body” As soon as our King Khan found out about this, he was furious. He had the pictures taken down from all the websites and even felt guilty about the entire ordeal that his daughter went through. In a recent interview with Huffington post, the actor talked about how him and his family dealt with the entire situation and how he felt guilty that his daughter had to experience such awkwardness because of him.

“I reached out nicely and said, dude, your website is not going to run on my daughter’s bikini body, can you please take it out? People saw where I was coming from. My daughter was a little awkward about it. She’s 16, yaar. And the headlines some sites use are… wow. We’re very liberal people and even had a laugh about it. But it’s still awkward,” said the actor. He went on to blame himself saying,” There could be someone running naked and that wouldn’t be news.” He felt that she is getting all this attention only because she is the daughter of an actor. He expressed that he was not protecting his daughter from the media but himself because it was his popularity and fame which had made the picture such a big news. During the interview, he was also asked about Aryan and Suhana’s careers in acting. There are many rumours about Aryan Khan soon being launched in a Bollywood film. Shahrukh commented that in their household, education was the most important. On the question regarding Suhana’s career in acting he jokingly said, “I feel you must not be an actor because your father or mother wants you to be — you should be an actor because you cannot be anything else.” He further commented that Suhana is a very talented actress and participates in a lot of theatre. He is still confused as to where he would like to send her to acting school and said that she does not want to learn from him.