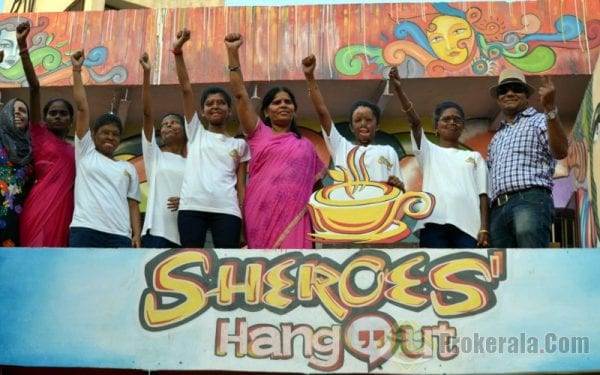 Café Sheroes’ Hangout is an initiative started by the Stop Acid Attacks (SAA) Campaign and the Chhanv Foundation, which works to rehabilitate survivors of acid attacks and spread awareness about such atrocities against women throughout the society, society that often looks down upon such individuals or views them with pity. It was opened in Agra with an initial capital of ₹3 lakhs raised through crowd-funding.

The Taj Mahal city has found another symbol of eternal love within herself, but it is not a gigantic stone mausoleum built by long dead and buried lovers. Instead, this edifice of love is a tiny café decorated with colorful graffiti and cheerful pictures right opposite Mumtaz Mahal’s final resting place. It symbolizes love – perhaps not the romantic kind – but something just as important; a love for life and humanity.

Café Sheroes’ Hangout is run almost entirely by five acid attack survivors: Ritu, Geeta, Rupa, Neetu, and Dolly. These five women share terrifyingly dark pasts filled with pain and violence, but more importantly, the courage to live on and pursue their dreams despite all odds.

In a tale oft-repeated, Dolly was attacked and permanently disfigured by a man she had refused to marry. Her father blinded Neetu as a child because of her mother’s failure to give birth to a son. At the same time, her younger sister died in the same attack.

Despite the horrific ordeals they have all undergone, these women are now ready to face life and the world once more. The walls of the café are decorated with pictures of acid-attack survivors, who also form the entirety of the staff; waiting tables, preparing delicious meals, chatting with customers, and managing accounts.

Unlike before, when they were forced to cover their faces and live in the shadows, they now display their scars with pride as battle scars. In a tongue-in-cheek satire of some of the society’s more ridiculous attitudes towards women, on a pin-up board in the corner of the café are displayed several items that society often blames for atrocities against women, such as chowmein, mobile phones, and make-up.

The café also has a reading room full of books about women’s empowerment, most of which were donated by customers and supporters.

Furthermore, it boasts a boutique displaying handicrafts and designer clothes designed and made by the ‘Sheroes’ themselves, which serves as an extra income source.

Rupa, who wanted to be a fashion designer before the attack put her life on hold, can now follow her dream through the SAA activists’ efforts.

The café functions on a pay-as-you-like basis with no fixed costs for the delicacies they serve. Many of the customers are tourists who are both sympathetic to the cause and generous. The café functions as a non-profit organization to spread awareness and provide a decent and dignified living for the women society had shunned. All the income generated is used to better the victims.

Beauty does not define character, and there is no place one can understand this truth better than at Sheroes’ Hangout. The name of the establishment is a play on the word ‘heroes,’ a tribute to the survivors who run and maintain it daily. The café also has a radio hub, enabling the Sheroes’ to fulfill their dreams of becoming RJs and performers.

Alok Dixit, the head of the SAA campaign, has said that plans for more such cafés in cities like Delhi, Indore, and Ludhiana are in the pipeline, which would help provide work and rehabilitation for at least five acid attack survivors from the city and surrounding areas.

So, the next time you visit the Taj Mahal in Agra, don’t forget to pay a visit to this excellent little café with its exceptional young ‘Sheroes’!