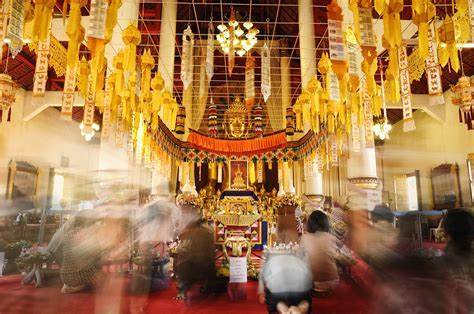 Since times immemorial, humans have relied on prayers to get them through hard times. These prayers, usually offered to supernatural deities, not only give these people hope, but it also provides them with the strength to face the challenges they may be facing in their lives.
Religion or faith has always played an essential role in people’s lives. It determines their lifestyle, morals, and values. One such widely followed faith is that of spirit worship in Thailand. Being a long-standing faith, spirit worship in Thailand has undergone many changes. However, this practice is prevalent among Thai people. 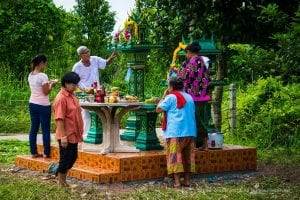 What is spirit worship in Thailand?

According to this animistic belief, a spirit resides in all-natural elements like rivers, trees, and the earth. These divine or supernatural, if appeased and respected by people, can be good for them, bringing them luck and prosperity. These ‘guardian spirits’ are also supposed to protect the inhabitants of the land from bad or evil spirits.

However, these spirits, if angered or disrespected, are believed to bring about ot hardships and loss upon the offender. The spirits are characterized by a fickle mind and mercurial nature. Nevertheless, these spirits can be easily bribed and pleased. These spirits can be those of ancestors or the ones residing in natural bodies like land, rivers, trees, etc.

The spirit worship in Thailand is now followed as a complementary belief along with Buddhism or other religions by most people. This spirit faith or the ‘Tai Folk Religion’ had existed in the region long before Buddhism came to Thailand. As Buddhism began expanding in the area, it got intertwined with this pre-existing belief, giving birth to this practice of spirit worship. This faith, also known as “satsana phi,” also includes many gods originating from the Hindu religion. 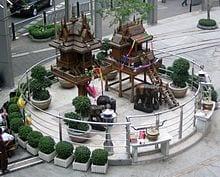 Variations of spirit worship in Thailand among various regions and tribes can be seen throughout the country. Some tribes give more importance to the existence of ancestral spirits who often take over the bodies of their descendants and communicate with the people.

The followers of the Ahom religion mainly worship the god of death, along with their ancestors. The Lamet religion has similar beliefs. The villagers organize a celebration once a year. Sacrifices and offerings are made to the village gods. Each village has a ‘Xemia,’ the person who carries out the religious ceremonies. Buffaloes are considered to be preferred by the ancestors.

As once travels through the streets of Thailand, they can easily spot these temple-like structures near the entrances of various establishments like shops, offices, or houses. These “mini-temples” or “mini-houses” called San Phra Phim (home of the guardian spirit) in Thai are built to house the spirit of the land.

Practices of spirit worship in Thailand

Every establishment in Thailand, be it a house, shop, hotel or mall, comprises of a shrine dedicated to the spirits on the border/entrance of the area. 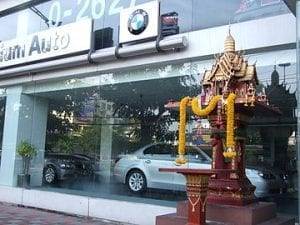 Adorned with flowers and other decorations, these “mini temples” are built to accommodate the spirit of the land. It is like offering the spirit an alternate place to reside in so that they don’t cause any harm or trouble to the human residents.

The family deeply reveres the spirits residing in these houses. Newborns of the family are introduced to the spirits so that the babies are protected by them. Before going on trips or journeys, the families make sure to “inform” the spirits, signifying that the house is now under the protection of the spirits till the human occupants return.

Offerings are made daily to the spirits of the land them as they are expected to protect the ones who acquire the property. These offerings include food, like rice, fruits, meat; Drinks, incense sticks, or flowers. The offerings vary from individual to individual. Apart from traditional food, fast food or drinks like colas and alcohol are also provided to the spirits to satiate them.

A famous  custom of spirit worship in Thailand is offering is strawberry “Fanta”. In olden times, animals were sacrificed before setting up these spirit houses, as an offering to the gods and spirits. However, this practice has been banned, and the red Fanta is used as a substitute for animal blood, which was believed to make the land fertile. 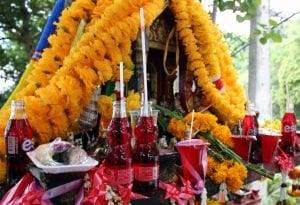 There are two types of spirit houses, one built for spirits and others made for the older inhabitants or ancestors of the occupants. The shrines that are dedicated to ancestors are usually built alongside “angel houses.” The angel, symbolized by a figure with a bag of money in one hand and a sword in the other, is believed to bring prosperity and protect the people.

The houses built for ancestors are called “San Ta Yai.” Unlike the spirit houses which are built on four pillars, these shrines stand on a single pillar and are slightly higher than the former. Inside the house, two small figurines, one of a man and other of a woman, is placed to denote the ancestors. These houses are placed behind the home, whereas the “San Phra Phim” is situated close to the entrances.

Some villages, along with separate spirit houses for every home, also have a shrine dedicated to the spirit of the town, called the “Chao Pho.” Yearly sacrifices and feasts are arranged to please the village guardian spirits. They are usually located on the borders of the village.

Not only are spirit houses built in villages or houses but also on roads where a lot of accidents take place. The motorists slow down and sometimes honk to pay their respect to the guardian spirits. 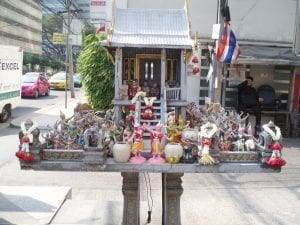 These houses can be brought from the market or a Buddhist temple. Because of their popularity, readymade spirit houses of various designs and colors are readily available. However, some people may prefer to get custom spirit houses made and also get the ashes of their ancestors embedded into these structures.

The establishment of these spirit houses has to be done according to proper religious rules and by following appropriate ceremonies.

Firstly, a Brahmin priest or a monk is consulted. After some astrological calculations, they decide the date on which the establishment would begin. The birth charts of the owner might also be referred to for this process. This procedure is also used to determine the color and other attributes of the spirit house.

The erection of these temples is similar to a celebration in the house. Neighbors and relatives are invited, and the monk or priest then carries out the prayers. A monk or priest first purifies the land for the establishment of the temple. An offering of coins and other things is made to the land spirits by digging a cavity on the ground and burying these things as a tribute.

Inside the house, idols of Buddha or the Thai goddess of wealth, Nang Kwak, are placed. For the pleasurable stay of the spirits, small figurines of servants, animals, and even cars, airplanes, and computers are placed.

However, there are some rules regarding the placement of these spirit houses. There are three essential things that must be kept in mind while setting up spirit temples.
Firstly, they should preferably be put up under or near a tree.
Secondly, they should not be placed on the left side of the entrance or under the shade of the main building.
Thirdly, they should not be facing washrooms or the road. 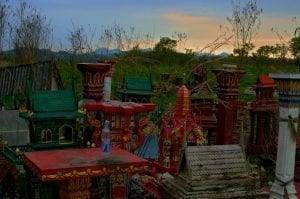 The disposal of spirit houses is almost as ceremonial as its establishment. Spirit houses are replaced when they become too old, or when new people into the place. The spirit houses are considered to be linked to people. Therefore, when people buy a home with a pre-existing spirit house, they prefer it to replace them.

Monks or priests have to be called in for this procedure. After some prayers, the spirit house can be removed. However, it is essential to dispose of the spirit houses properly. They are usually given to temples or placed under the sacred Bodhi trees. A lot of spirit graveyards can be spotted in Thailand. However, not everyone follows this practice.
Some people might just throw away these spirit houses on the side of the road or any other empty place. This is done as everyone cannot afford the cost of the removal ceremony.

The practice of Spirit Worship in Thailand has existed since ancient times. Not only has it survived so long, being passed from one generation to the other, it has also continued to flourish under the strong Buddhist and Hindu religious beliefs of the country.