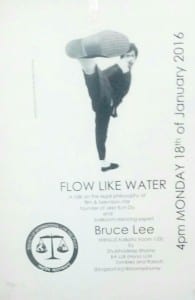 Law graduate and blogger Shubhodeep Shome visited NUJS on 18th January 2016. He had been invited for a talk by the Society of International Law and Policy. Based on the theme ‘FLOW LIKE WATER’, the talk focused on the legal philosophy of film and television star, founder of Jeet Kun Do and ballroom-dancing expert Bruce Lee. The talk attracted a wide spectrum of audience members, ranging from individuals interested in martial arts to students of jurisprudence.

Mr. Shome began by discussing the evolution of Bruce Lee’s film career and the types of films that he was involved in. He took the audience members through a journey of Lee’s early life and the life that the star led after shooting to the limelight. A discussion regarding the speculations surrounding Lee’s death followed.

The talk focused on the philosophy that Bruce Lee advocated. Lee’s idea of ‘Flow like Water, Be like Water’ was explained in detail. Audience members were also told about how Lee’s philosophy was inspired by strands of Buddhism and Taoism. Additionally the legal understanding promoted by Bruce Lee was compared and contrasted with the teachings of famed jurists. A short question-answer session took place at the end of the talk.

How to Become a Successful Creative Essay Writer

How to Choose An Ideal LMS?