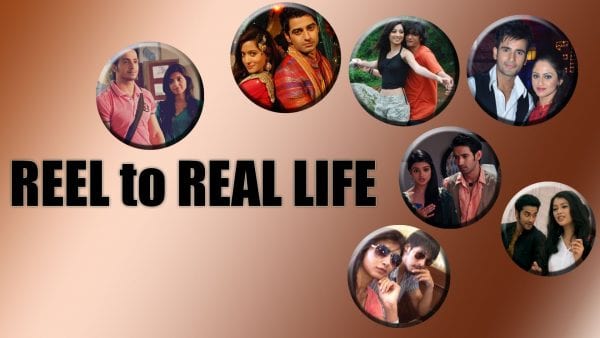 Many television actors have confessed to be struck by Cupid’s arrow. This shouldn’t come as a surprise as these television couples spend about 8 hours on set every day. This is a pretty long time to interact, bond and fall in love. Some of these couples are adored so much onscreen that the fans badly wished they would become real life couples as well. To the joy of the fans, some couples actually fulfilled these wishes by getting married in real life. Check out the most adorable reel to real life couples of Indian television.

This leading pair “Manav and Archana”, from the television series Pavitra Rishta, met on the sets and had a live-in relationship. The couple got engaged, making all the fans ecstatic! Talking about his lady-love on a show, Sushant said: “I just cannot do without her. This is one of the reasons I’m emotional, insecure, and I want to be with her.”

It’s said that Tapasya fell in love while running away from Veer  on he sets of the television series Uttaran. Nandish gave Rashmi an extremely romantic proposal by bringing her blindfolded to a private yacht decorated with lights and flowers.

The couple met on the sets of ‘Ghar Ek Sapna’. Though they never got to work onscreen  together, the incredible love they got from Ghar Ek Sapna bought them together. They had come together for the first time in Yash Raj Film’s show on Sony: Seven. Love did  not happen that time. They fell in love only when they were cast together in Star Plus’s ‘Maryada: Lekin Kab Tak?’. The couple got married in 2011 and Raqesh calls Riddhi his lady luck as he believes she has brought with her an incredible amount of luck and love.

Gurmeet and Debina came into the limelight starring in the mythological series Ramayana, where they were cast as Ram and Sita. Debina met Gurmeet when she came to Mumbai for the first time for a talent hunt competition. They got married in 2006.

The couple who perhaps can be tagged as the first couple of Indian Television in the 21st century, made thousands of fans rejoice when they tied the knot in 2004. They make you believe in the saying “opposites attract” as Hiten is more of the mischief making and happy-go-lucky guy, while Gauri more of a no-nonsense kind type of girl. The couple worked together in ‘Kyunkii Saas Bhi Kabhi Bahu Thi’ and ‘Kutumb’.

Cast together as Radha and Shyam in Pyaar ke do Naam –Ek Raadha Ek Shyaam, their on-screen love became off-screen love only after the show got off air. The couple got married in 2008 and are blessed with a lovely daughter.

This most adored couple of Indian television got married on Valentine’s Day of 2003. The couple had fallen in love during their work in Ghar Ek Mandir. Ram Kapoor has come a long way and now is busy in Bollywood.

This couple, in addition to the love that they share, also share the same birthday on November 15th. Daljeet and Shaleen who fell in love on the sets of Kulvadhu got married in 2009 after dating for around three years.

This couple met on the sets of Nach Baliye. Sai was already engaged to a US based businessman when she met Shakti. Shakti and her became friends, and since Sai decided to make a future in India, she withdrew the engagement to the businessman. They got married within a month after Shakti proposed.